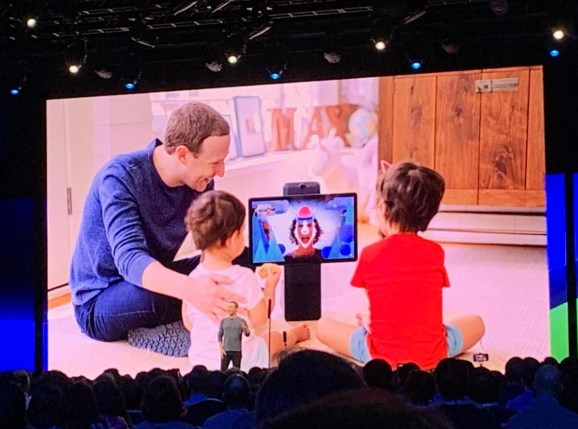 Mark Zuckerberg using Spark AR with his kids and mother via Portal.

In its race to catch up with Google Assistant and Alexa, Facebook is attempting to make its in-call experiences a major distinction. Doing things together, Facebook says, can bring you closer to loved ones and help you feel like you’re hanging out in the same room — but it doesn’t always work out that way.

Strike up a video call with family on Portal or Facebook Messenger, and an AI-powered Smart Camera will frame the scene, while Smart Volume can amplify or reduce volume so your voice is clearly heard. But once your kids find the AR effects, any meaningful connection you showed up for may be put on hold.

It can be fantastic when the kids turn into fire-breathing dragons or pigeon astronauts, but in a short time children can devolve a Portal video call from a chance to reconnect into AR-fueled chaos.

Portal boasts more than AR effects, of course. You can also listen to Spotify music together, and Story Time lets you read to kids with AR characters during calls. New stories include Pete the Cat, Llama Llama, and Otto.

But Portal’s AR experience is a fitting demonstration of a feature companies like Google, Facebook, and Amazon are still refining.

Each of the tech giants wants to win its smart display a prominent spot in your kitchen or bedroom, where it can act as a digital photo frame, control smart home devices, make video calls, and help you get things done.

Facebook introduced Portal in October 2018, with plans to push developer ecosystems for Portal apps by tapping augmented reality in-call experiences that extend beyond Story Time. Plans to invite more developers to make experiences for Portal calls are still in development but amount to nothing more than constructive conversations today, Portal head of product management John McCarthy told VentureBeat in an interview at F8 in April.

“There’s a lot that we think we can do to keep building into calls,” he said. “We want to be creating new things that people can engage with more deeply.”

“Usually, if [we’re] hanging out, we find reasons to spend time together, we find things to do, and so it makes those connections feel different from how video calls have felt scheduled on a laptop or on a phone.”

A number of Portal upgrades were introduced at the F8 developer conference in late April — such as the addition of Instagram photos when the device is not making video calls, a Portal app to upload photos without the need to go on Facebook, the ability to call your own Portal, and a way to control which family members’ friends and photos are displayed by the device.

Facebook has added a number of features to Portal since this spring, a company spokesperson told VentureBeat in an email, like Photo Booth for sharing photos and videos with friends on Facebook Messenger. You can also leave private video messages if someone doesn’t answer your call, and you can say “Hey Portal, good morning” to get birthday and event updates.

In-call experiences are currently limited to Story Time, AR masks, and Spotify, but Facebook appears poised to bring several other features to the experience, from games to streaming video to a Facebook AI assistant that’s reportedly in the works.

In December 2018, Facebook’s Portal team introduced a web browser and games like Scrabble, Words with Friends, and Battleship, but augmented reality-fueled video games are likely to be part of Portal calls in the future, considering Facebook Messenger got AR games for group video calls in August 2018.

Amazon Prime video for Portal devices is also due out soon, but a Portal spokesperson declined to state whether video will be available during calls.

Portal’s next user feature upgrade may well be to let people watch streaming videos together during video calls. Group video chat startups like Rabbit and the makers of Let’s Watch It! have explored the idea, while Google’s Area 120 launched the experimental app Uptime in 2017 to let you watch and share YouTube videos together.

Just a week after the debut of Portal and Portal+ last fall, news emerged that Facebook is reportedly developing a new device for televisions that offers video calls and streaming video. If true, such a device is sure to include Facebook Watch and IGTV, as well as popular services like Prime Video. The Information reported last week that Facebook reached out to Disney and Netflix to support a new Portal device for televisions, due out this fall.

It’s easy to imagine Facebook at some point bringing other popular social or streaming content — such as Stories — to the Portal in-call experience. Since being introduced in 2016 on Facebook apps, Facebook and Messenger Stories have 300 million daily active users.

After months of periodic Portal use, I still see room for improvement in Portal’s Smart Camera and in-call experience. For example, the Portal camera was a great help in a recent call to see my niece open presents for her fifth birthday, but in a room of 10 to 15 people, it periodically followed the wrong person.

To avoid getting in the way of the company’s stated mission of bringing people closer together, Facebook’s in-call experiences need an off switch or more controls that enhance focus and avoid distraction, such as a background blur effect similar to iPhone’s Portrait mode.

The addition of new communication features could support video applications for Portal beyond calls with family or friends. While Portal is sold today as suitable for families, it’s also well suited for small business owners who want one-to-many communication with customers. That’s a use case Facebook VP and AI lead Jérôme Pesenti recently described in a conversation with VentureBeat when he said his kids use Portal to take lessons with a music teacher.

As is the case for flagship smartphones like Apple’s iPhone and Google’s Pixel, the camera has become a key distinguishing factor for smart displays like Portal.

Google’s Nest Hub Max, due out later this year, will also use AI and a camera to differentiate its offering. The Hub Max will use facial recognition to deliver personalized results for anyone who walks by and, like Portal, employ AI to frame video calls.

For Facebook, this paradigm means a focus on video calls and expansion of the in-call experience — with efforts to bring in Facebook Messenger, WhatsApp, and perhaps someday Instagram. Messenger and WhatsApp alone maintain more than a billion daily active users.

The ability to do things with friends and family during video calls is a compelling concept — one that could help Facebook redefine social sharing in the future. But in order to actually bring people closer together, the experience will have to walk a fine line between entertainment, utility, and distraction.