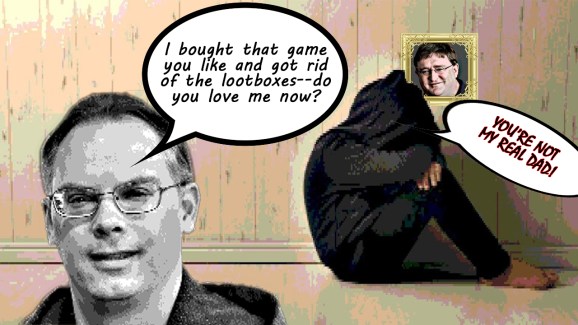 Tim Sweeney is PC gaming's stepdad, and PC gamers are very angsty about it.

Rocket League is one of biggest success stories when it comes to live-service games. It debuted in 2015 for PlayStation 4 and PC, and it is still very popular. On Xbox One, it is the No. 11 most-played game, according to the Microsoft Store. And it’s currently in the top 10 most played games on Steam today. But now under new owner Epic Games, developer Psyonix is dropping the lootbox-style crates that it has used to generate revenue from its dedicated audience.

In a blog post, Psyonix said it will remove crates at some point later in 2019. In place of those lootboxes, the studio plans to introduce a storefront.

“Here at Psyonix, and Epic Games as a whole, we are dedicated to creating the best possible experience for our players all over the world,” reads the Psyonix blog. “In pursuit of that goal, later this year we will remove all paid, randomized Crates from Rocket League, replacing them with a system that shows the exact items you’re buying in advance.”

It’s worth noting that Psyonix has already shifted a large part of its monetization focus over to premium progression passes. Epic, which owns and operates popular battle royale shooter Fortnite, has made a lot of money with its battle passes. These are systems where you can buy a pass that unlocks items as you play and level up within a game. These passes are appealing because people know what they can unlock, and because progression carries over from match to match.

In its blog post, Psyonix made an effort to give some of the credit for this move to Epic.

“This is similar to changes implemented earlier this year by the Fortnite: Save the World team,” reads the blog.

The reason for that is because many gaming fans hate the random nature of lootboxes. And many people also hate Epic for paying for games to come exclusively to its PC store instead of the competing Steam platform. But what if Epic helps developers get rid of lootboxes? Would that make you feel any better about the company?

Still no? OK. Well, like your video game stepfather, Epic is probably going to keep trying to win you over.