PUBG Mobile is now the revenue leader among battle royale games on mobile, market research firm Sensor Tower said today. Much of its surge has come since February, and China plays a significant role in it.

Publisher Tencent Games released PUBG Mobile in China two months ago, rebranding it as Game for Peace. And in July, player spending reached $167 million for the past 12 months, which is a 748% increase year-over-year. This makes the PUBG the No. 1 game in terms of revenue for three months in a row, according to Sensor Tower’s findings (which don’t include Fortnite on Android since it’s not in Google Play and excludes the myriad Android stores in China).

PUBG Mobile is free-to-play but makes money off in-app transactions like progression passes.

“China is the major driver of this growth — it has contributed almost 30% of the game’s all-time total in just two months,” Sensor Tower cofounder Alex Malafeev said over email. “That said, even with China out of the picture, the game has still grown its revenue nearly 310% year-over-year as of last month, or more than [four times].” 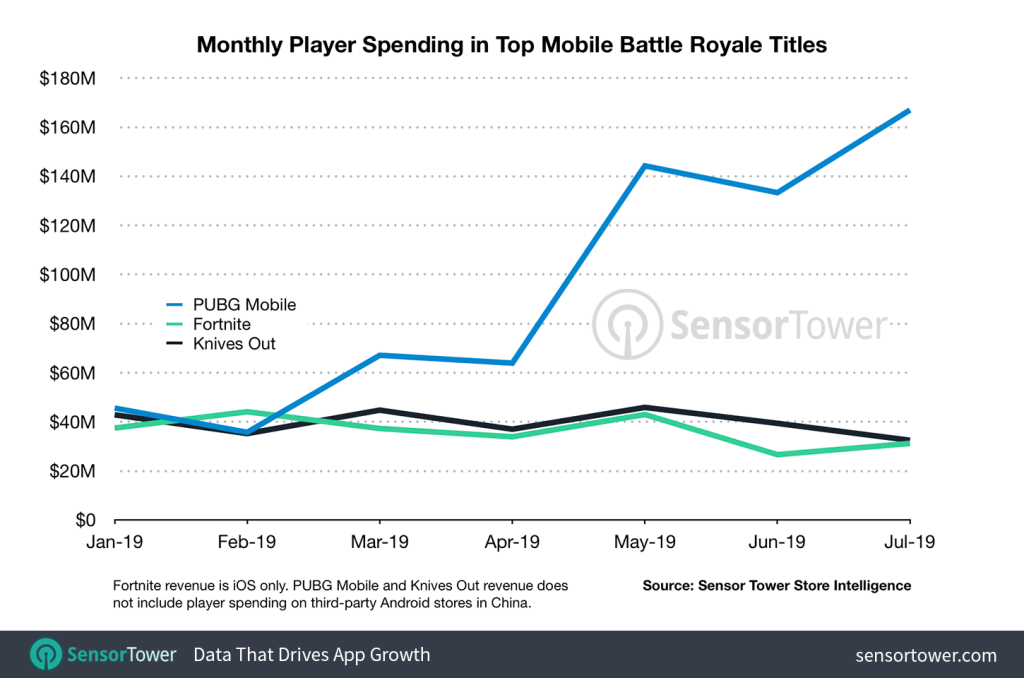 Game of Peace (aka PUBG Mobile) has brought in about $241 million over the past 60 days, or about 28% of the estimated $860 it has grossed to date worldwide. It’s total revenue has put it ahead of Epic Games’ Fortnite and Knives Out from NetEase.

The title’s total revenue since launch now places it ahead of Fortnite and Knives Out, which have grossed $725 million and $771 million, respectively, compared to PUBG Mobile’s $860 million. Fortnite’s revenue is inclusive of iOS only, as the title is not available through Google Play.

But it’s not all about growth from China. The U.S. is also throwing money at PUBG Mobile, where Sensor Tower says revenue has grown 565% year-over-year, to $32 million last month. PUBG Mobile/Game for Peace’s revenue last month was almost five times greater than its two closest battle royale competitors: Fortnite and Knives Out.

“Outside of China, the game has been experiencing growing popularity in the U.S. and South East Asia. Tencent has also done an excellent job of keeping the title fresh with new content at a steady pace, while its season passes have been delivering on a consistent basis,” Malafeev said. “Also, if you really look back, the current state of the game is so much more refined and enjoyable than it was at launch.”

Additionally, PUBG Mobile has a new Lite version out in certain regions. It’s not coming to Game for Peace, though. It’s less taxing on the hardware and networks thanks to a smaller download size and lower RAM requirements, which means battle royale fans with older smartphones can play it.

Which could boost PUBG Mobile’s earnings even more next month.