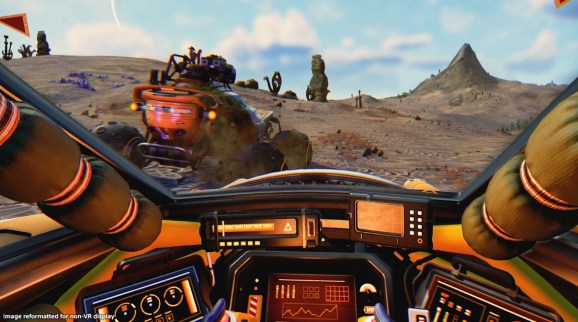 You can get in a vehicle in No Man's Sky Beyond VR.

When the No Man’s Sky Beyond update was announced earlier this year, we knew it would include three core pillars.

The first of those, obviously, is VR support. Hello Games’ entire sci-fi adventure has been ported to headsets. Another key feature is expanded multiplayer, bringing the player count up to 32 and increasing the ways for you to explore together. For the past few months, though, the developer remained silent on what the third pillar is. Today, it’s announcing No Man’s Sky 2.0.

No, No Man’s Sky 2.0 isn’t a separate update. Instead, it’s Hello Games’ umbrella term for all of the many, many additions, tweaks and fixes the team is making to Beyond.

The idea is to create the most robust, stable version of the game yet seen whilst also streamlining its structure to make it accessible to players old and new. Hello Games wants to give people starting out fresh the chance to find their own playstyles, and make sure returning players from three years ago don’t get lost in the swarm of additions.

Some of the additions, which we’ve further detailed in our extensive pre-launch preview, include creature riding, improved base building and a new cooking system. As Hello Games’ Sean Murray alluded to online earlier this week, it’s a subtler feature than the other core pillars.

“If we were doing one thing I think it would have been really concerning for us because there’s no one thing that people seem to resonate [with],” Murray told me when I visited the studio this week. “One person will say “Better trading!” or something like that and other people will say “Oh, I have no interest in that!” and you just constantly see it.”

So, yes, everything in 2.0 applies to VR, but Hello Games’ aim is to make sure it’s not overwhelming.

“What we’ve been trying to do is one: make it more cohesive, make it easier to come back to, make it easier for new players. But two: really fill in the detail and deepen some of the ways of playing,” Murray added.

We’ll find out very, very soon whether or not they succeeded. No Man’s Sky Beyond launches this Wednesday, August 14 across PC, PS4 and Xbox One. It’s a free update for existing players. Full PC VR and PSVR support is included.