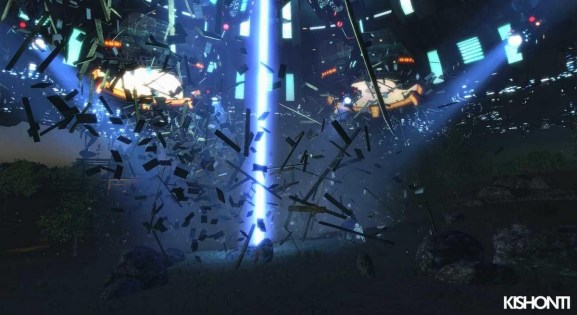 Vulkan will enable games to tap high-end graphics hardware, resulting in imagery like this.

The latest version of the Oculus Unreal Engine Integration adds support for Vulkan on Oculus Quest and Oculus Go. Unity told us they will add the same “later this year.”

Vulkan is a low-level graphics API developed as a successor to OpenGL, which was originally released in the early ’90s. Vulkan was developed by The Khronos Group, a nonprofit industry consortium which includes major tech companies like Nvidia, AMD, Microsoft, Facebook, Google, and Intel.

Vulkan on Android has the same advantages as DirectX 12 on Windows or Metal on Apple operating systems. It is the official LLAPI for the Android OS, used on Oculus Go and Oculus Quest.

By giving developers lower level access to the GPU, engines can achieve better performance because there is less CPU overhead for each draw call. Additionally, Vulkan helps engines properly take advantage of modern multicore CPUs, which were not a relevant factor when OpenGL was created.

During a talk at GDC 2018 in April, Oculus told the crowd that Oculus Go would get Vulkan support thanks to custom GPU drivers made in a partnership with ARM and Qualcomm.

In August 2018, the Oculus Mobile SDK added basic support for Vulkan. However, it did not yet support anti-aliasing or fixed foveated rendering.

These features were finally added late last month, paving the way for game engines to add support for Vulkan on Oculus standalone headsets. This may have been spurred by the recent release of the Oculus Quest, the first consumer standalone headset with room scale tracking and Touch controllers.

Almost all Oculus Quest and Go apps are made with Unity or Unreal Engine. The latest version of the Oculus Unreal Engine Integration for Unreal 4.22 adds support for Vulkan on both headsets.

We reached out to Unity to ask when they would follow suit, and they told us the feature will be released “later this year”.