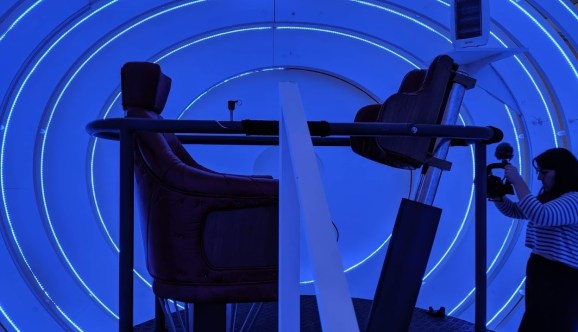 Fly is a VR installation in London about flight.

In 1903 the Wright brothers did the impossible; they flew. Not only that, but they did it with some wood wrapped in fabric and a 12 horsepower gasoline engine. I’m fondly reminded of their crude efforts as I step into the booth for Fly, a new VR experience showing at London’s Saatchi Gallery this month.

Inside the strange giant egg that houses Fly, which is created and directed by Charlotte Mikkelborg, you’ll find a curious makeshift VR rig. To the front is a sort of harness you lean into during the attraction’s first half, and behind it a chair to sit in in the second. Strap in, put on an HTC Vive and you’ll find yourself in the fields of Tuscanny, next to a daydreaming Leonardo DaVinci.

It’s here that you get your first taste of what Fly is all about. You suddenly find yourself cast as a bird, soaring through the sky high above the fields DaVinci ponders in. It’s quite similar to Ubisoft’s Eagle Flight, only the installation uses some clever tricks to make Fly a more convincing and (quite literally) uplifting experience.

Twisting my head tilted the platform I was on to give me the sensation of turning, diving and ascending while flapping my arms sent me flying higher. Meanwhile, a fan whipped my face with the Tuscan air as I was bathed in golden sunlight, the summer scents of the fields starting to flood my senses. Combined together under one roof (or, in this case, shell), you can’t help but feel, just for a moment, that you’re really there, winding through trees and marveling at mountains in the distance. It’s quite a treat.

It’s over just as it begins, but Fly has more stops on its whirlwind tour.  One particular highlight is commandeering the Wright brother’s plane in a minute-long flight that perfectly captures the sense of invention and elation the pair must have felt. Again, when it asks you to land, you don’t really want to.

Later trips to more modern inventions aren’t quite as magical with your face finally protected from the wind, though a playful look at the future of flight does inspire a little excitement. Fly works best when it’s rooted in history. 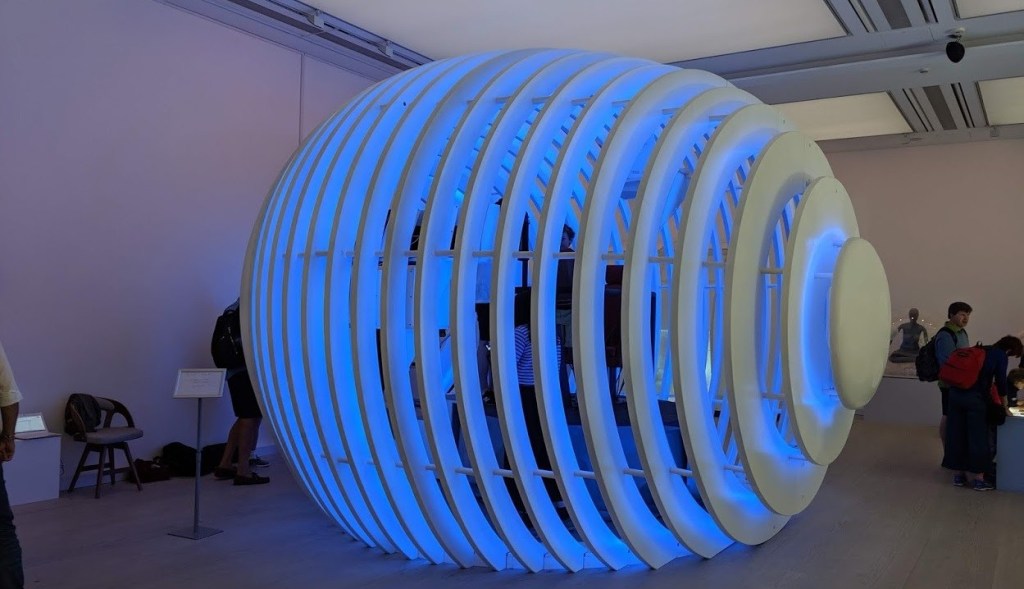 Above: Fly sits inside a funky egg-shape installation.

It might not always be the most graphically proficient piece, but the potent assault on the senses leaves you walking on air long after you’ve removed the headset. It’s powered by the raw enthusiasm of creation, something that Mikkelborg emphasizes in curious fashion outside of the experience. Place your hands on the egg that surrounds the VR rig and it will eventually change color before you hear the sound of it cracking.

It’s intended to symbolize the beginning of the long journey to make man fly. Coming from a VR angle, though, it’s equally fitting as a starting point to mastering virtual flight. One day we’ll look back on Fly and laugh at where we were in the mission. As it stands right now, though, it’s a pretty amazing experience. Humanity is learning to fly all over again.

Fly is on display at London’s Saatchi Gallery throughout August. Tickets cost £20. You can book to see it right here.