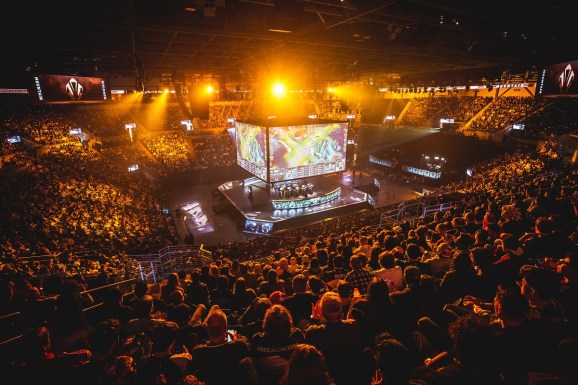 Esports can fill stadiums for big events -- but is that enough?

The video game market is booming — PwC’s recent Global Entertainment & Media Outlook predicts it will reach a revenue of over $30 billion by 2023, compared to $16 billion in 2014, in the U.S. alone. Within the burgeoning gaming market, PwC cited esports as the fastest-growing segment, predicting an annual growth rate of 18.3 percent through 2023.

While esports is catching on with some audiences – we often hear of professional sports stadiums selling out for esports tournaments – it’s important to remember the frequency of ticket sales or viewership does not necessarily equate to high revenues. In fact, the esports industry today doesn’t make nearly as much money per fan as traditional sports, despite having the interactive and richly technical DNA to deliver entirely new experiences. For example, a professional sports league like the NFL earns a revenue of around $50 per fan, while that number for esports is only $3.20.

This is by no means a harbinger of doom for the market. Quite the contrary. Esports is still in its infancy, and there is clear interest and strong potential to monetize the growing fan base. So what does the industry need to make this happen and what can companies in the esports ecosystem do to ultimately boost revenue?

For esports to truly take off and meet investor expectations, the industry must get to know its customers better and provide experiences that viewers want. To achieve these goals, the industry as a whole should focus on the three Ps: personalization, prizes, and participation.

Personalization: Targeting the right audience in the right way

The widespread success of the general gaming market has largely depended on its capability to personalize the gameplay experience. Take the popularity of Fortnite. Whether it’s by customizing your character’s duds, or even how they dance, players are given countless options to interact and engage with the game in the way they want. In the case of Fortnite, this has also led to a significant source of revenue. These “skins” and dance moves come with a price tag.

While the esports audience may not be identical to that of the wider gaming market – for example, 42 percent of esports viewers don’t play the games they watch – these fundamentals still hold true. Personalization and highly customizable content will be critical for continued growth.

Shortcomings in advertising, particularly, how esports audiences react to or engage with ads, pose another challenge to the market. Esports fans are difficult to engage from an advertising perspective — 9-in-10 are either blocking ads, using private browsing windows or deleting cookies, according to HubSpot. This makes it even more difficult to attract an audience and can also temper the sector’s appeal to advertisers.

Even if an ad does break through, it doesn’t always do so in a meaningful or accurate way. If you are shopping for a pair of shoes online, it’s no coincidence to see follow-up ads for that product pop up on your screen. But what if you continue to be targeted even after you bought the shoes or purchased a slightly different pair? Ads are often not fully accurate to the individual and don’t always drive impactful engagement.

Today’s ad tech enables platforms to understand what the consumer is doing or is interested in, but the industry falls short in applying that information toward meaningful action. AI and machine learning, for example, can change this by detecting on-screen content frame by frame and use it to make relevant connections to the viewer. This type of advancement can help close the gap and end some of the longstanding issues facing advanced advertising.

For example, say you’re watching Red Dead Redemption 2 Online content that shows people in a campsite or around a campfire, and then you get an ad for a potential destination for that camping trip you’ve been looking into. Tying real-time content with the data that is already being collected is how AI and machine learning can make advertising more relevant than ever for the industry, while also offering new opportunities to boost revenue.

I’ve been playing video games since they first made their way into arcades and homes across the United States (that’s a long time ago). Gaming has always been about surprise and reward. Unlocking the next cutscene in Ms. Pacman felt like a revelation at the time. Fast-forward, and you’ll see successful business models built around the idea of discovering and unlocking virtual goods. Esports is in the perfect position to explore that dynamic of prizes, but it’s been slow going.

That said, there are some notable companies experimenting with this concept today. Sliver TV, for example, converts minutes of engagement into tokens that can be used to wager on matches, buy virtual goods like unlocking new elements of a game, or even physical items like merchandise.

The main idea here is that a consumer’s time and attention are valuable. By showing they recognize this, brands can create a deeper level of engagement and sense of purpose with their audiences. This will allow esports brands to go beyond traditional advertising, which as discussed above, has had limited success in this market.

It’s important to be authentic and not take advantage of the relationship with fans. If done well, incentives can provide a stronger sense of a return on time investment. If the consumer is rewarded for their time, they will have a stronger urge to come back, invest additional time and money into your offerings, and ultimately boost the bottom line. In turn, both the publisher and the consumer win.

Participation: Expanding interaction outside of players

If you’ve ever attended a basketball or football game, you’ll know that “watching” a sport is far from a passive experience. Cheering, booing, standing, and stomping are all part of the action. Watching esports, however, can feel passive, especially when it’s not at a giant arena. Despite that, esports has the potential to offer significantly better forms of engagement and interaction. Video games are fundamentally interactive, and technology could enable wide-reaching engagement in a way that will make traditional sports fans envious.

Obviously, wagering is an age-old method for fans to have a stake in the outcome of the game – and esports will see a significant gambling business – but this only scratches the surface of what’s possible. Imagine a sport where fans at home can influence the content itself.

In March of this year, a speedrunner live-streamed himself playing Grand Theft Auto: San Andreas while encouraging his audience to activate cheat codes to create obstacles to try to stop him. The result? An engaging, fun experience that everyone was able to take part in. Additionally, the event drove revenue to the Twitch platform and to the streamer; not just through ads – which is old hat – but through the purchase of virtual currency to be used in the massively multi-fan experience. Vermintide 2 has a “Twitch Mode” in which viewers can vote on in-game effects for players, which is a good example of such a concept.

Those aren’t quite esports, but esports has the potential to experiment with live crowd effects. One potential method: offering non-gameplay altering bonuses. For example, a viewer might be able to purchase skins for their favorite players on the fly or to activate fireworks when a team scores.

Delivering an experience not dissimilar to traditional sports to an audience that actively avoids being monetized won’t work for long-term profitability. However, innovating in areas that fans already show an interest in – such as non-gameplay altering engagement – gives esports platforms new revenue opportunities. With more than 84 million anticipated esports viewers by 2021 in the U.S. alone, capturing purchases from just a fraction of those watching has the potential to drive significant revenue.

You can’t impose your presence watching a live football game from your couch as if you were in the stadium. With esports you can. Whether it’s through charging tokens for influence in the game’s content or linking such a feature to an ad, esports companies can adopt this concept on a much larger level and open up entirely new revenue streams.

Compared to the giant, mature segments of the broader entertainment and media landscape, the esports industry is still the smaller, new kid on the block. However, the market offers tremendous potential to engage with a younger, more technically savvy generation.

With an emphasis on personalization, prizes, and participation, esports can provide experiences unlike anything the video game industry has seen before.