Microsoft Flight Simulator is taking to the skies in 2020, but the publisher is sharing details about the current state of development beginning today. Microsoft launched the game’s Insider Program, and you can sign up for it right here. Insiders get regular updates about the studio and Microsoft Flight Simulator as well as a roadmap for what the developers are working on next.

For August, the Flight Simulator team is running an internal alpha test. In September, it will update fans about that technical alpha and likely when you’ll get a chance to try it yourself. The company previously promised that it will run test builds of the game. Also next month, the studio will talk about how it plans to implement feedback from players. Then, in October, the developer will have a timeline for the second tech alpha.

You can see all of that and more in the roadmap below: 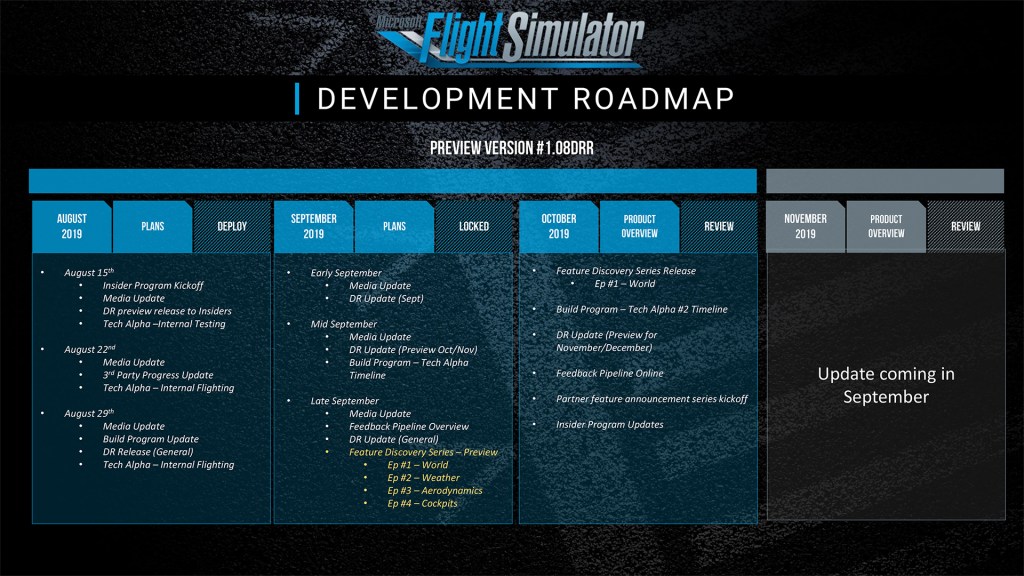 When does the Microsoft Flight Simulator technical alpha test open?

I’ve reached out to Microsoft to ask for clarification. I’ll update this story with any new information.

Microsoft announced its new Flight Simulator at the Electronic Entertainment Expo trade show in June. The game is using modern visuals and satellite imagery to build a realistic-looking world for you to fly around. This is the first Flight Simulator release since 2006, and it’s part of Microsoft’s renewed dedication to PC gaming.

Flight Simulator is also coming to Xbox One, and you can get it as part of a subscription to Xbox Game Pass for either the console or PC.