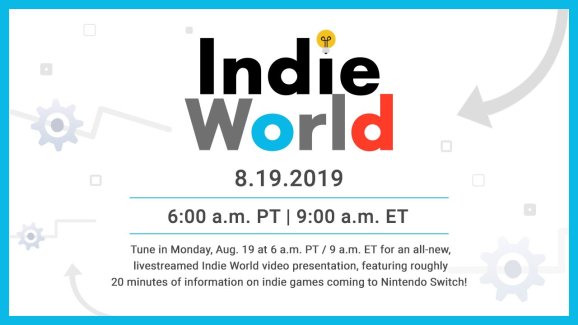 Come with me, and you'll see: a world of pure indie gaming.

Nintendo Indie World is coming. The company is planning to use this event to show off a bunch of new indie games for the Switch. On Monday, August 19, it will broadcast Indie World to Twitch, YouTube, and more. The stream begins at 6 a.m. Pacific time, and you can watch it right here.

For this event, Nintendo is promising “roughly 20 minutes” of details about upcoming indie releases. The Switch is a strong platform for indie games. It is great to have those kinds of games on the go, and they tend to sell better on Switch than on other platforms.

And Nintendo has really relied on and support indie gaming with the Switch. The company has hosted multiple of these livestreams to talk about various games coming to Switch. In March, it had the Nindies Showcase Spring 2019.

But Nintendo’s relationship with indies goes behind simply highlighting their games. The company has begun working in partnership with some smaller studios. Most recently, that took the form of a Zelda-themed spinoff of the rhythm game Crypt of the Necrodancer called Cadence of Hyrule.

Finally, Nintendo is also consolidating branding across its various regions. While it called its March indie event “Nindies Showcase,” it is going with “Indie World” this time around.

Indie World is the name that Nintendo uses in Japan for its Nindies Showcase equivalent. The publisher released its last one in May, where it talked about games like Cuphead, Ape Out, and Overcooked 2.

We’ll have coverage of Indie World. Here’s hoping that it includes more information about UFO 50.