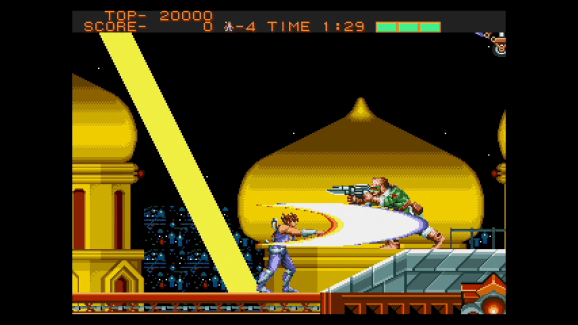 I love this setting.

When I turned on the Genesis Mini that Sega sent me, I first went for Mega Man: The Wily Wars (for reasons I’ve detailed before on this column). After that, I played the familiar classics: Sonic the Hedgehog, Ecco the Dolphin, and so on. Then I decided to try some of the games that I’ve never played in the retro console’s 42-title library. I first went to Strider, originally an arcade game created for Capcom that got a Genesis port in 1990.

This was during the pre-Sonic era of the Gensis, back when Sega was still touting the machine as the place for arcade-perfect ports. So Strider make a lot of sense for the console. But despite being a huge Genesis fan, I never played the sidescroller action game. The only reason I even knew of Strider’s existence is because the character is a fighter in Marvel vs. Capcom 2.

I didn’t know what I was getting into when I started up Strider. I figured it was about ninjas. I assumed it would be a kind of Ninja Gaiden clone. In some ways, it is. The action focuses on you running around and killing enemies with your sword. But Strider is a much crazier experience than Ninja Gaiden, and that’s why I fell in love with it.

Strider is a sort of sci-fi take on the whole ninja genre. The opening level has you running through some futuristic, robot-ridden version of Russia (or some Russia-controlled territory in space, it was hard to tell). It’s a creative setting. I mean, maybe Russian architecture with sci-fi and martial arts flourishes sounds bizarre, but it works. More important, it’s different. After seeing hundreds of water, fire, and forest-themed levels during my life, I loved this insane stage.

That insanity extends to the enemies you fight, an assortment of robotic ninja canon fodder and memorable boss encounters. My favorite happens at the end of the first level. You find yourself in front of some kind of Space Russia council. Suddenly, all of the councilmen begin jumping out of their seats and fusing together into a giant, flying, snake-like monster.

Yes, it’s as awesome as it sounds. 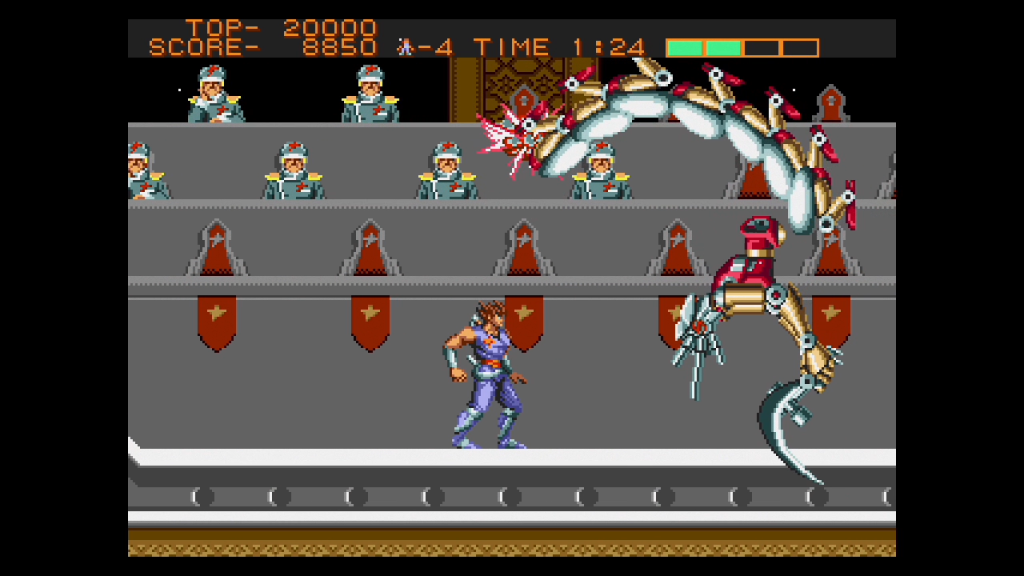 Above: Greatest boss ever??

Aside from how much I love the craziness, it’s a fun and fast-paced game. Yes, you spend most of your time swinging a sword, but your sword strikes are gigantic. The range on your attacks is so long that it almost feels like you have a gun. You can even get an upgrade that extends the reach further, making the weapon so big it’s almost comical.

Movement and jumping feels great. Strider doesn’t just jump; he flips and cartwheels through the air. It makes you feel acrobatic while maintaining weight to the experience (something that’s missing in games that depend on double-jump mechanics to capture ninja-like agility).

Strider rules. I have a lot of stuff on the Genesis Mini to play, but this Capcom arcade port has turned into one of my unexpected favorites. I also have a sudden urge to play some more Marvel vs. Capcom 2. I may have to kick Ryu off my team to give Strider a spot.