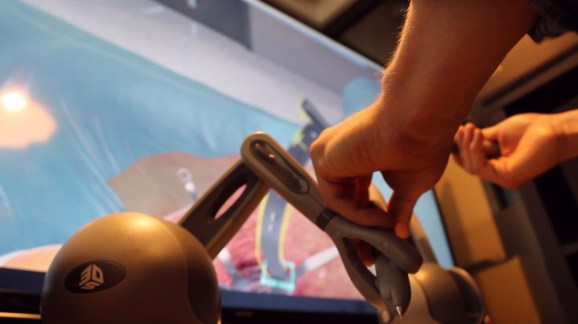 FundametalVR has a platform for training doctors in VR.

FundamentalVR is on a mission to make VR surgery simulation as robust, convincing, and efficient as possible. Recently, it made a small but significant step toward that goal with eye-tracking.

Usually when we hear about eye-tracking’s importance to VR, it’s to do with foveated rendering. Eye-tracking as a means of input often feels like an afterthought. But with Fundamental’s platform, which launched commercially earlier this year, it becomes a surprisingly helpful tool.

“The reason we’ve always wanted it is minimizing head movement whilst you’re operating in the real world is really important,” FundamentalVR CEO Richard Vincent tells me. “We track your eye-movement and your surgical sight gaze. Being able to track that with the precision of your eyes as opposed to the movement of your head which is what we’ve been doing so far is just a great step forward.”

When you operate inside FundamentalVR, a virtual window guides you. Interacting with it usually requires you to look up from surgery. Now with HTC’s Vive Pro Eye, though, you can quickly glance at your desired option out of the corner of your eye and then look back. It’s still not as seamless as, say, human interaction in real-life scenarios, but it is indeed a step forward.

It also improves Fundamental’s capabilities as an analytics and assessment platform. Vincent says it allows educators to more clearly identify where users are placing their focus and how to improve on that going forward.

The platform as whole, remains an impressively robust experience. I’ve tried FundamentalVR a few times now. I’m always equally astounded and somewhat grossed-out by how convincing it is. With the pen-shaped controller in hand, which is held by a robotic arm to provide resistance, I trial new features like skin that pushes and bends when I press instruments into it. 3D-printed controllers can be swapped out for specific tasks, too, for enhanced realism.

For Fundamental, though, even this feels preliminary. The team wants to build a versatile platform that works with practically any kind of haptic tech, but it’s at the mercy of those breakthroughs, to some extent. The company’s already integrated support for HaptX gloves, but devices like these are few and far between right now.

“There’s five or six really interesting companies working on haptic technology right now,” Vincent says. “And we’re excited to see them get to robust availability on a global basis at low cost but they’re none of those things right now.”

For now, though, FundamentalVR seems to be expanding in the right areas. This remains one of the best examples of the good VR is doing out there in the world.