Over the last year, the concept of “security tokens”— digitized forms of financial securities such as bonds, shares, and real estate titles that are represented on a blockchain or distributed ledger — has started to gain traction.

Security token proponents claim this innovation is nothing short of a “financial revolution.” They say security tokens have the potential to reduce friction in asset issuance and trading, securitize “intangibles” like intellectual property rights, and enable issuers to tap into hard-to-access liquidity around the world.

In reality, despite their potential, security tokens face substantial challenges, especially when it comes to liquidity, immature infrastructure, and murky regulatory waters. And it’s still unclear whether the promise of security tokens will ever come to fruition.

Security token offerings (STOs) emerged in the aftermath of the initial coin offering (ICO) boom of 2016-2018, during which projects were able to raise $20 billion. Most fundraising came directly from global investors without the traditional investment banker middlemen. The ICO bubble popped primarily out of concern that many coin offerings constituted illegal, unregistered securities issuances. STOs repurpose the fundraising techniques used in ICOs but use the crowdfunding clauses in the JOBS Act of 2012 as a different regulatory exemption. 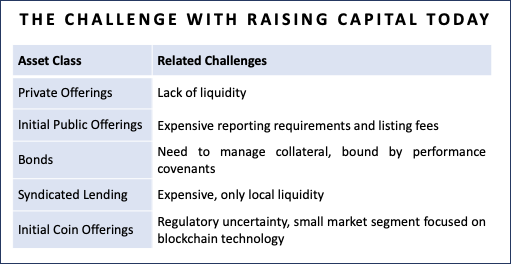 One of the major undercurrents propelling interest in STOs and ICOs has been poor returns in traditional asset classes, like equities and bonds, since the global financial recession of 2008. The cost of issuance has also increased, particularly in the U.S. with post-financial-crisis regulations. Throw in capital flight from countries such as China and Venezuela, and you have many investors hungry for alternative avenues where they can earn better returns.

Proponents suggest that security tokens are cheaper than traditional financing models because they can raise funds directly from investors, cutting out expensive middlemen. Since the tokens are automated through coded programs, there is no need for middle-office staff to manage contracts.

Security tokens also have a liquidity advantage, as the barriers for buyers to participate in the market are lower. With more buyers, assets are more likely to sell at a fair price. Comparatively, many financial instruments today suffer from low liquidity because they are limited by geography or siloed markets.

Most importantly, security tokens could be a boon to the average retail investor by fractionalizing assets in an easy and secure way. Fractionalization is a way to share ownership in an asset that would otherwise be out of the financial reach of the average investor, enabling the “democratization of finance.” Fractionalization can put investment opportunities into the hands of those with fewer resources and lower barriers to participation in the global economy. One recent high profile example of fractionalization was the St. Regis resort hotel, where a fifth of the property was sold through $18 million of digital tokens. Fractionalization of art has also been a hot topic, most recently the subject of lively debate at Miami Art Week.

Fractionalization is particularly useful in emerging markets where wealth imbalances are high. For example, real estate investment firms have benefited from land and property price appreciation in the Mexican Riviera (a sevenfold increase over three years in Cancun), but the local population has not. The minimum investment has been out of the reach of a local. Small companies in Mexico are faced with high lending interest rates charged by the local banks, which can be as much as 40%. By fractionalizing –– whether it be real estate or debt – –issuers benefit from better liquidity, and the individual investor can obtain exposure to a broader set of opportunities.

“We aim to be the home of entrepreneurs and innovators, to help startups and small-to-medium enterprises get the capital they need to grow their businesses,” Victor Navarro, CEO of Alteum, a Latin American incubator in Mexico that has been piloting fractionalized small business debt, told me.

However, some experts doubt security tokens will result in greater liquidity compared to traditional instruments. “Building up a liquidity ladder in regulated securities can take years,” Mark Smith, founder of the Association for Digital Asset Markets (ADAM), told me.

In real estate specifically, some believe that liquidity through increased buyers isn’t actually realistic. “For liquidity to occur there needs to be significant transaction volume,” explains Katya Fisher, a Partner and Leader of the Blockchain and Digital Assets Practice at Greenspoon Marder LLP, “and the industry is in such early stages that many of the pain points have yet to actually be resolved by the technology. The potential is certainly there, but progress is dependent on high-quality deals and nurturing the growth of a proper infrastructure. That won’t happen overnight.”

However, Monika Proffitt, Founder and CEO of Rise Markets, believes security tokens can offer increased investor choice and significantly reduced costs for all. Proffitt’s vision is to create a platform that will allow individual investors to own fractionalized shares in a property. “Through security tokens, you can eliminate up to 77% of the real estate transaction costs and provide a market for an individual investor. That’s a win-win for everyone.”

The fact is that even with all its potential and popularity, tokenization is a young market, and early adopters face serious challenges, including immature technological infrastructure and murky regulatory frameworks.

When it comes to tech infrastructure, there are few mature venues to trade security tokens. Beyond tZero (a market-leading pioneer and alternative trading system, whose sole listed asset is still trading light), the market is still evolving, falling into two camps. On one end, we have traditional and national exchanges such as the Swiss Stock Exchange, which have securities capabilities but are growing their digital asset capabilities. From the other end, digital token natives such as the Coinbase cryptocurrency exchange are still developing their securities capabilities and are scrambling to acquire broker dealers to compete with the traditional exchanges.

It is not just the market infrastructure providers who are on a learning curve; the regulators are too. When Blockstack co-founders Muneeb Ali and Ryan Sheehan launched their “regulation A+” issuance, they broke new ground by proposing the use of security tokens. But there was no playbook for doing this, so it took Blockstack a long time and a lot of money – 10 months and approximately $2 million – to obtain authorization from the SEC to proceed.

At least Blockstack is sophisticated. Samson Williams, CEO of consultancy Axes and Eggs, worries we’ll see organizations without viable business models riding the hype cycle as they did during the ICO craze. “Using security tokens to raise money in the absence of a legitimate business model [or] adding blockchain ‘tokens’ or ‘STOs’ to your marketing language may entice a few investors who can be easily swayed by buzzwords … but that doesn’t make a profitable business,” Williams said. “Crowdfunding presents its challenges, so you should really focus on how your business will generate revenue post-raise and how your business is lowering its customer acquisition cost, not its investor acquisition cost.”

The security token market clearly is in a holding pattern for now, with some early adopters putting an experimental toe in the water, but it will take a lot more for STOs to fulfill their potential and promise to “decentralize finance.”

Perhaps John Hensel, COO and co-founder of security token infrastructure provider Securrency, put it best: “Digital securities will eventually find much greater liquidity in the private markets than is currently seen with traditional private securities. But in the near term, the enhanced value of these digital securities will primarily result from automated compliance and reduced issuance and servicing costs. These savings are unlikely to be compelling if you are a small issuer; you need an entity that has a very large inventory,” he said. “The large asset managers and other major institutions of this world need to come on board. Once this happens, we’ll see adoption take off across the sector.”

Ben Jessel is Head of Growth and Kadena. He was formerly Head of Blockchain and Innovation at Capital Markets Company, where he oversaw numerous signature projects for implementing blockchain governance and operating models across financial institutions. @BenJessel