Physical locomotion has remained one of virtual reality’s larger challenges, as things like real walls and tethered headsets tend to inhibit a user’s ability to walk endlessly through digital environments. Rather than asking people to rely on handheld controllers, several companies have come up with foot-based solutions ranging from treadmills to rocker boards — now an Austrian company called Cybershoes is releasing an alternative that places sandal-like controllers on your feet, paired with a special carpet and one of three optional chairs.

The most basic version of Cybershoes sells for $400 and comes with a circular carpet you can place beneath a self-supplied rotating chair. One sandal straps on to each of your feet, using RF rather than Bluetooth to send positional data to a receiver at your computer as you move. In addition to orientation tracking, the Cybershoes use rollers to judge depth motion, and have grips to provide some traction for turning. Each sandal has a battery for eight to ten hours of usage on a three-hour micro-USB charge.

One obvious benefit to using Cybershoes is exercise: You can actually get a workout walking, running, and jumping in VR spaces. The company also suggests that they’ll “enable far longer VR sessions without causing the users to become tired,” though it remains to be seen whether that’s actually true, as wearers will now need to factor leg fatigue into their sessions alongside arm and head movements. 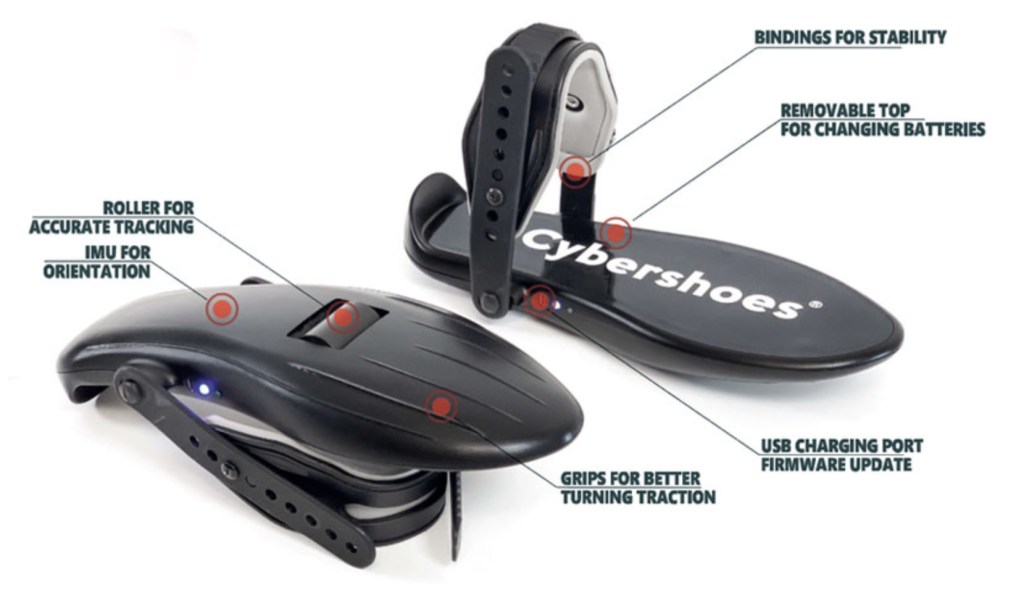 There are also three Cybershoes bundles with modern-looking chairs: a $500 “Gaming Station” with a height-adjustable, back-supporting Cyberseat; a $1,000 “Arcade Edition” with a heavier-based, backless HAG Capisco chair; and a $1,300 “Business Edition” with a customized HAG Capisco Puls chair that has deluxe back support. In each case, the idea is that you’ll use the chair to support your body as you move, jump, and turn in VR, rather than actually moving around in physical space.

“VR is an endless space, but until recently, users weren’t able to walk naturally in it,” explained Cybershoes CEO Michael Bieglmayer. “Our solution is easy and practical for home use. I can attest that it offers an immersion that even VR veterans will find hard to escape.”

Cybershoes debuted in physical prototype form at last year’s Gamescom and has since evolved through three stages into the product that’s now shipping. The company promises full SteamVR platform support, including Valve treadmill support, as well as general compatibility with HTC Vive, Oculus Rift, Windows Mixed Reality, and Pimax headsets, plus any VR title that allows free movement with controllers. Users interested in experiencing the hardware for themselves will be able to walk or run in the shoes during Gamescom in Germany this week.