Humm has announced a wearable that provides you with “neurostimulation” that you wear for 15 minutes a day to improve your memory.

The Berkeley, California-based company said it measured a 20% improvement in working memory and a rate of learning that was 120 times faster than a placebo after a 15-minute session with the wearable patch.

The hope is to help people continue to learn and grow throughout their lives. I tried out an early version last year in the hopes of getting better at playing games. Sadly, it wasn’t something that I could measure.

You wear the neurostimulation device on your forehead, and it provides a mild electrical stimulation called tACS that has been investigated for 30 years.

The company has adapted this technology into a new lightweight and comfortable form factor, at a price that makes it accessible to almost anyone — comparable to the price of a cup of coffee.

Unlike other devices designed for sleep or sports performance enhancement, which may cost as much as $10,000 for a lab research model or $500 for consumer versions, the new easy-to-use Humm patches are available for about $5 each, making it extremely easy for people to simply give it a try rather than committing to an expensive investment in a complicated device.

Humm is targeted at people 40-plus who are studying, reading unfamiliar material, or learning new skills. 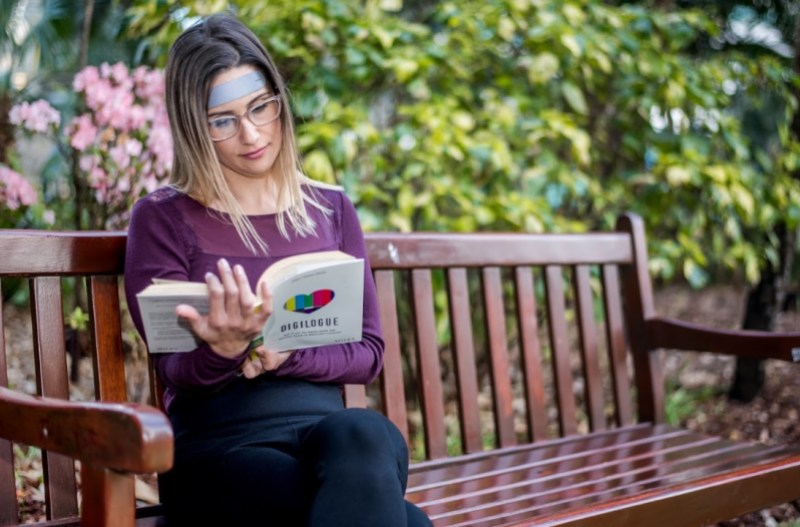 Above: Can Humm make you smarter?

Humm’s technology provides a boost to the prefrontal cortex via its soft patch applied to the forehead like a bandaid. Similar to a conductor using a tuning fork to tune an orchestra, the patch emits a finely tuned tiny electric pulse that ripples throughout the brain and encourages neurons to resonate together at the same frequency.

This helps temporarily connect and prime more parts of the brain to process new information, immediately improving your working memory and ability to learn, and the effects last for up to an hour and a half afterward. 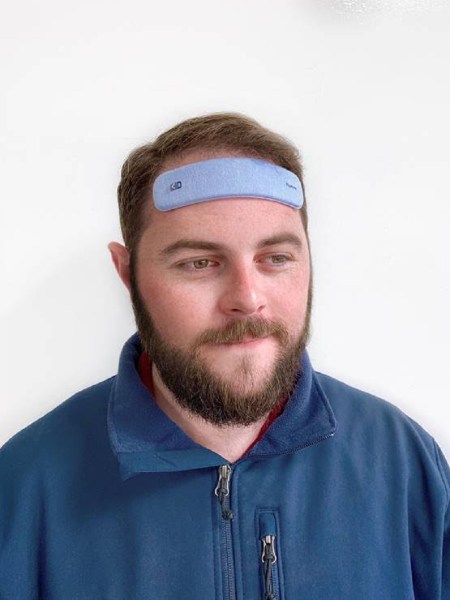 Above: Iain McIntyre, CEO of Humm, wears a Humm patch.

In their own successful randomized trial recently conducted at UC Berkeley’s Skydeck accelerator, Humm replicated the benefits that were first measured decades ago in peer-reviewed research at the world’s top research institutions. They measured the effects of the device on working memory in comparison to a placebo in 40 subjects. The results showed a 20% improvement in the volume of information that a person could hold in their working memory for several hours by the tuning of the activity in the prefrontal cortex.

This represented an acceleration of the speed at which a user could learn the task involved by 120 times compared to the placebo.

The trial was designed and conducted with oversight and statistical analysis from Humm’s scientific advisory board which includes Ted Zanto, director of neuroscience at the University of California at San Francisco Neuroscape lab and Vivienne Ming, neuroscientist and founder of Socos Labs.

“Humm is the first and only technology that has been shown to improve your working memory quickly and measurably,” said Iain McIntyre, CEO and co-founder, Humm, in a statement. “Working memory is often described as the sketch pad of the mind — where your brain temporarily holds numbers, names, and other facts, and is an incredibly important part of learning.”

In a statement, Ming said, “Working memory touches on intelligence, memory, attention, imagination, and even complexity of thought, which in turn affect life outcomes from health to wealth. Technology must always challenge us. When we turn it off, we should be better than when we turn it on. Humm is making this possible for us.”

McIntyre added, “As children we learn incredibly fast, but working memory starts to diminish in our 20’s and continues declining as we age, and because it seems so unavoidable, we’ve all just come to accept that as we age, we learn more slowly. Humm’s mission is to change that, and to allow people to continue to experience the joy and curiosity of learning for years and years.”

Many businesses and organizations are starting to take notice of Humm’s technology. In fact, the United States Air Force has already ordered their first 1,000 patches for use in an upcoming clinical trial in their training academy.

Made from environmentally-friendly fabrics, gels, and innovative disposable battery technology, Humm’s patch will be available to purchase in packs or on a discounted monthly subscription. Users receive 12 patches for $60 or $5 per patch each month. It’s easy to put on, like a sticker, and takes seconds to set up.

Humm’s wearable patch is available for pre-order to the public now with delivery in early 2020 through their website, www.thinkhumm.com.