In the past, Gamescom (the giant fan event in Cologne, Germany) was a sideshow for the worldwide game industry. Companies could choose to come or skip it. They made their announcements at the Electronic Entertainment Expo (E3) in Los Angeles in June. Fans made Gamescom overcrowded. But based on my impressions of Gamescom 2019, the German event is growing up.

In 2018, 370,000 people attended the video game trade fair in Cologne, and perhaps an equal number attended this year. The German people are quite smart in that most of them leave Cologne at this time to go somewhere else. I left by Wednesday morning to escape most of the crowds. But I saw enough to see what the show does right and what E3 could learn from it if it is to survive.

In a way, this year’s Gamescom copied a page from E3, adding some spectacle. Microsoft had a televised event that was small in person at the Gloria Theater in Cologne, but it was quite loud with all of the rowdy Germans in attendance. The Coalition unveiled the much-anticipated Horde mode, or co-op play, at the event.

And then the spectacle-maker-in-chief, Geoff Keighley, held an Opening Night Live event for the first time, with 15 announcements in a livestreamed preview of the best of Gamescom. And Hideo Kojima, the much-admired Death Stranding maker at Kojima Productions, stunned the audience with a befuddling demo where I learned the main character of the game wears a “bridge baby” (BB) in a fake womb to see something (like a Beached Thing, or BT) from another world. Kojima also showed some gameplay where you could pee on the ground and grow a mushroom. 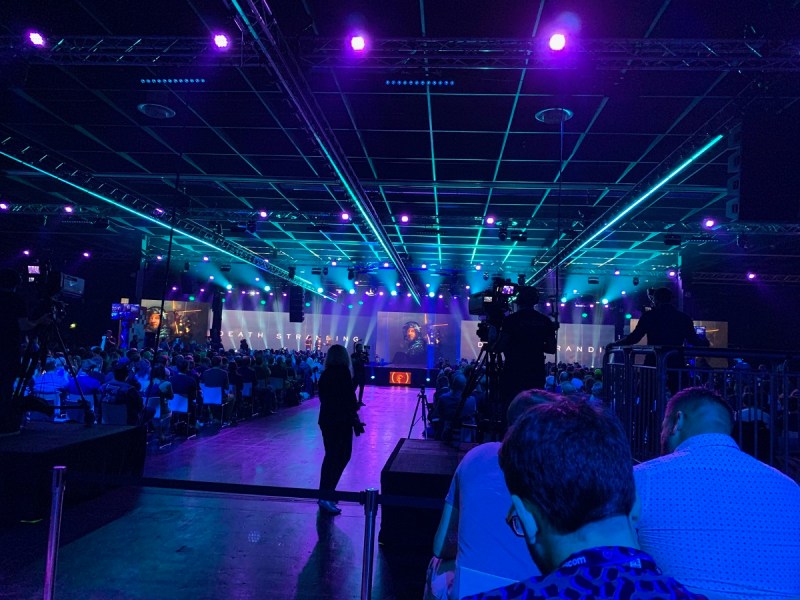 And the crowd went wild. It was a strange moment, but one that many gamers live for, and it happened at Gamescom. Since Gamescom happens later in the year, we were able to play more games that were much closer to shipping, like the multiplayer combat in Call of Duty: Modern Warfare. I enjoyed playing that before almost anyone else did. 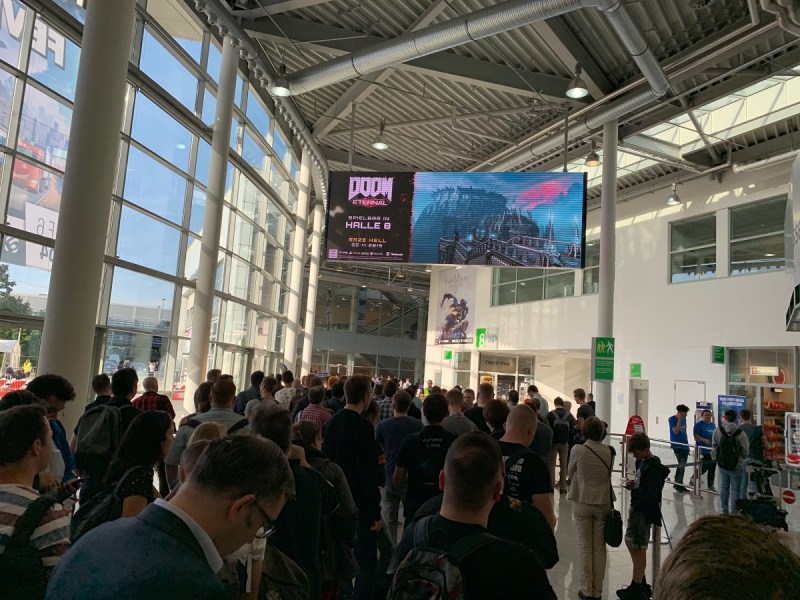 Above: The crowd at Gamescom 2019 on opening day on Tuesday, August 20.

The Opening Night Live led to an opening day that wasn’t so crowded. A few halls are dedicated to the professionals, so they can do business-to-business meetings in relative calm, while the fans wait at huge booths in the consumer halls. 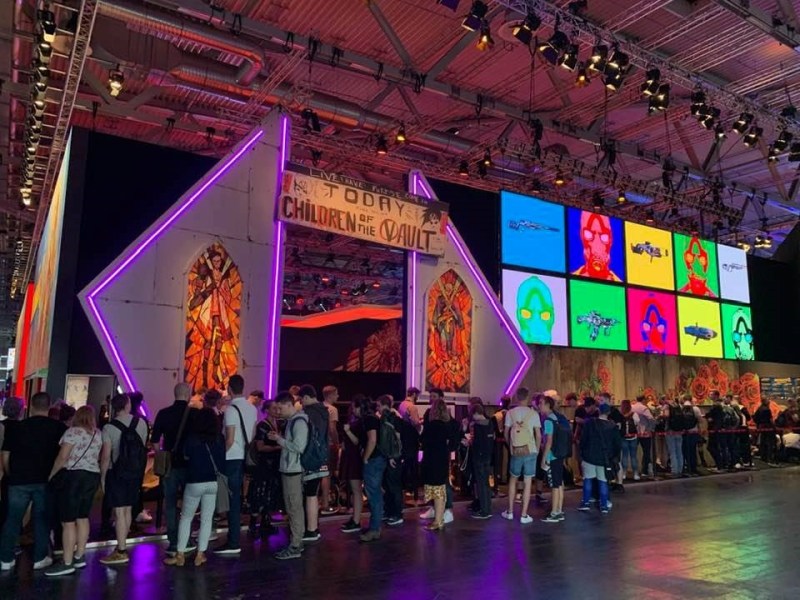 Above: The line for Borderlands 3 eight minutes after Gamescom 2019 opened.

I took a small glimpse of the consumer halls. For instance, I saw a full line snaking around the Borderlands 3 consumer booth, just eight minutes after the opening. The halls were so giant that the biggest booths looked small by comparison since the fire marshals require a lot of space between the booths to be able to support huge lines of fans. A ton of fans attended, for sure, but they weren’t in my way. 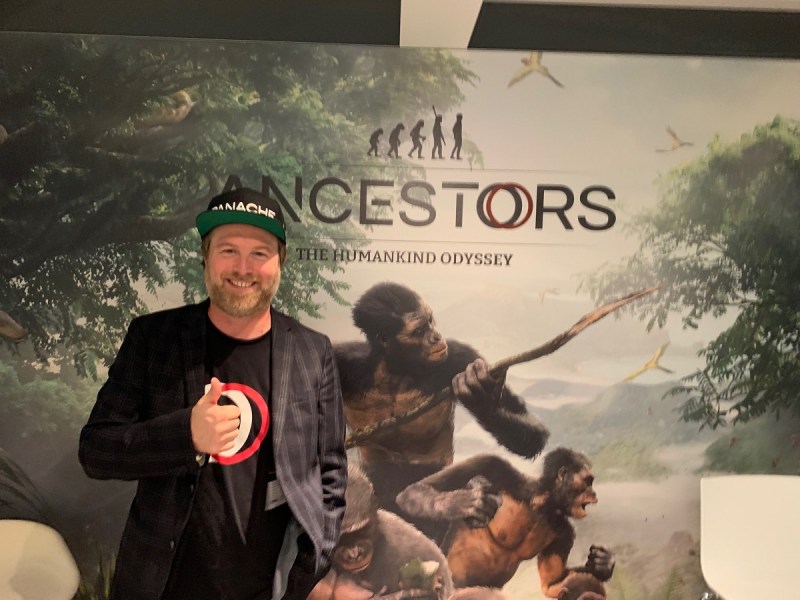 Above: Patrice Désilets is the creator of Ancestors: The Humankind Odyssey.

I was able to get things done, like interviewing Patrice Désilets, the Assassin’s Creed creative director who was showing off his first game in many years, Ancestors: The Humankind Odyssey. As he played the game about human evolution that is shipping on August 27 on the PC and the consoles, he told me how emotional it was to get a game into the market after nearly a decade in the wilderness. 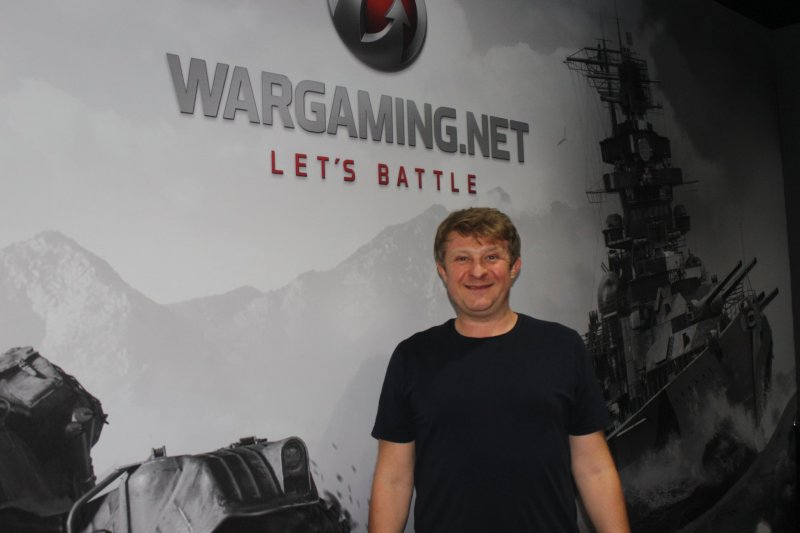 Above: Victor Kislyi, CEO of Wargaming, at Gamescom 2019.

I got hear Victor Kislyi, CEO of Wargaming, speak rapidly in Russian to his developers who were trying to get an online demo of a Special Forces shooter game called Caliber to work. Eventually, it worked, and it looked pretty good, as did Pagan Online, a Diablo-like fantasy game. It was nice to see Wargaming getting close to shipping something that wasn’t part of its World of Tanks family. 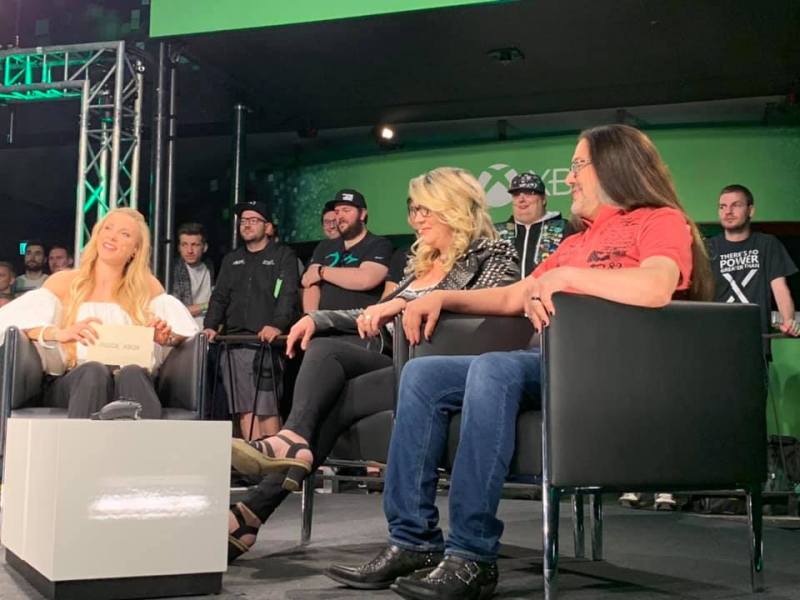 Above: Brenda and John Romero at the Microsoft event at Gamescom 2019.

Brenda Romero and John Romero talked about their new game, Empire of Sin, which takes us back to the crime families of the 1920s Prohibition era. Brenda talked about how studying that world of crime became her obsession after her mother refused to tell her the answer to a question she asked as a child. The young Brenda asked why a Speakeasy bar was able to operate in broad daylight in her small town on the U.S.-Canadian border. The answer was somebody got paid off. Many decades later, Romero turned that obsession into a game.

And I got a close look at the mobile version of Pearl Abyss’ Black Desert, which has some awesome graphics that let you fight with a character in a fantasy world and zoom in on that character’s face to see it in great detail. It was perhaps the best-looking mobile game I’ve seen.

It was also useful for me to attend Devcom, another professional conference that takes place ahead of Gamescom. Starting Saturday night, Devcom drew more than 3,000 people from more than 75 countries.

While Keighley and Gamescom showed a lot of mainstream games, Devcom helped me see more of the rest of the industry. I saw David Fox and Noah Falstein talk about how they designed LucasArts’ classic Indiana Jones and the Last Crusade more than 30 years ago.

Above: My Child Lebensborn

Catharina Boehler described the heart-rending plot of My Child Lebensborn, about the post-war bullying of the children of Norwegian women and German soldiers. And I spoke with Simay Dinc, who talked about creating the Recontact series of mobile games at a studio in Istanbul, where the game industry is putting down roots and attracting a diversity of male and female talent.

I moderated a few talks. I shared my own opinions on the game industry with Joseph Olin of the Video Game Bar Association. I also spoke with the Machine Games developers on creating co-op play in Wolfenstein: Youngblood, and I also moderated a panel of thinkers on how developers should approach violence in games. I’ll be writing about those sessions soon. 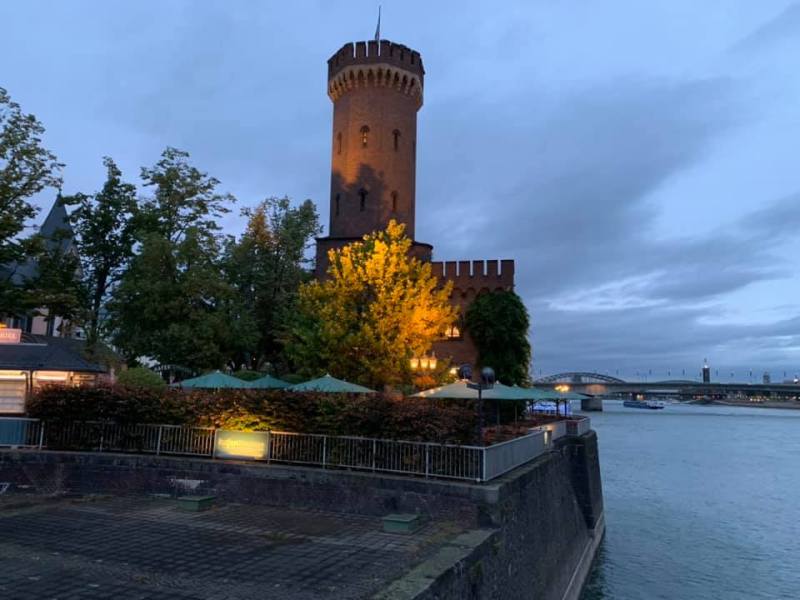 Above: The Rhine River in Cologne.

I enjoyed eating schnitzel, moderating those sessions at Devcom, walking along the beautiful Rhine River at night, and playing a game in secret that won’t be revealed for a while. Compared to what I saw a couple of years ago at Gamescom, the show is getting better. E3’s organizers should learn that. E3 still has a lot more exclusive announcements and large-scale events, but it shouldn’t just stand still. Even though E3 is dear to my heart and is a lot closer for me, this year it felt like it was on the downswing. For my Gamescom adventure, I didn’t mind traveling halfway around the world. It reminded me that when it comes to games, we all live in one world.

The organizers of Devcom paid my way to Cologne. Our coverage remains objective.