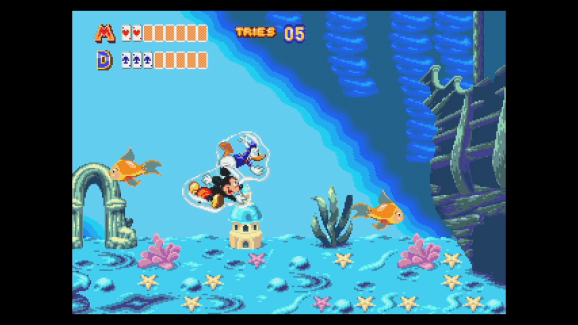 I’m still playing a lot of the Sega Genesis Mini. Sadly, most of you will have to wait until the retro console’s official release date on September before you can enjoy its library of 42 games. But I’m having a great time going back to a lot of my childhood favorites.

Now that I’m older and am getting a chance to play World of Illusion for the first time in years, I can appreciate just how clever and charming this sidescroller is.

A world of difference

Its name suggests it would have a lot in common with Castle of Illusion, but it plays little like its predecessor. Castle of Illusion is mostly about jumping on and bouncing off of enemies. World of Illusion only gives Mickey and Donald magic capes to attack with. It’s less about fighting enemies and more about cooperative platforming.

At least it is when you are playing it with two players. World of Illusion actually has three different experiences. You can play alone as Mickey or Donald, or two players can control both characters. Each variation has its own route. When you’re playing with two people, you can jump off of each other’s shoulders to reach high places. Then the character who reached the high spot can drop a rope for the other climb. When you’re playing solo, levels will accommodate your lack of partner with things like catapults that will help you reach those heights without the help of a friend.

But even if you’re playing alone, the experience changes based on who you play as. Mickey is able to squeeze through certain gaps that Donald’s large duck behind can’t pass through, making the characters go through different paths in the same level.

Playing the game with a friend is really the way to go. If Donald gets stuck, the person playing as Mickey can grab him and pull him out. Even with the simple 16-bit graphics, it’s amusing to see Mickey have to come to Donald’s rescue.

World of Illusion looks great. It’s a big step up from the graphics in Castle of Illusion, presenting stages with brighter colors and characters that do a better job resembling their cartoon counterparts.

It’s also a breezy and chill game. You’ll have some moments of challenge, but World of Illusion is not a difficult or long. If you wanted to, you could enjoy it with a friend in a couple sittings (or one really long one).

When you get your Genesis Mini, you’ll have access to a lot of great cooperative games like Gunstar Heroes and Streets of Rage 2. Just don’t overlook World of Illusion, one of my favorite Disney video games ever.