Nintendo maintains its hot streak when it comes to the gaming industry’s recent TV ad impressions. the company’s commercials account for over 64% of the sector’s impressions across 30 days, with Rockstar Games in second place with 20% of industry impressions.

GamesBeat has partnered with iSpot.tv, the always-on TV ad measurement and attribution company, to bring you a monthly report on TV advertising by the gaming industry. These are the ads, and by extension the games, that game makers are putting major muscle behind. 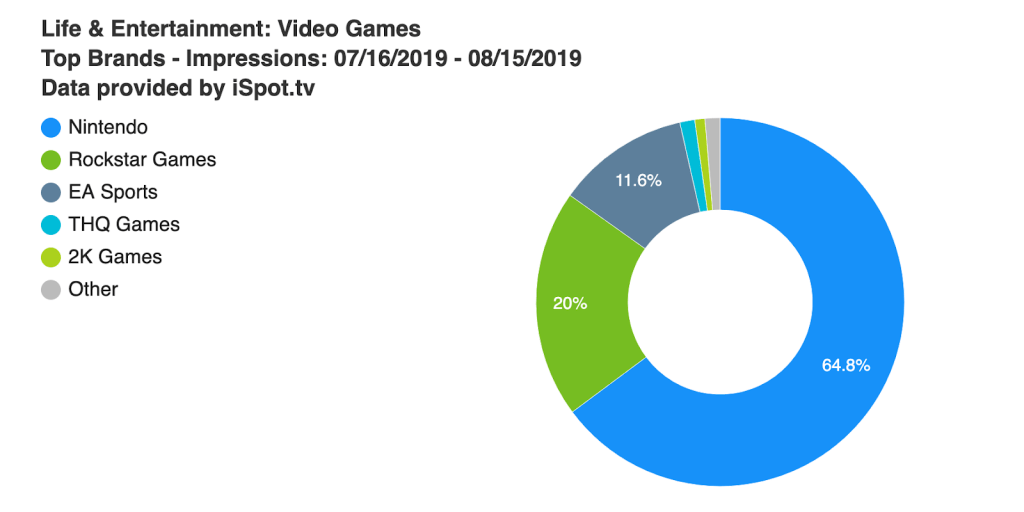 Below are the top five most-seen gaming industry TV advertisers from July 16 through August 15.

Overall, there were 401.5 million TV ad impressions during the period measured, with eight brands spending an estimated $5.6 million on 19 spots that aired over 1,600 times.

Nintendo takes first with over 260.2 million TV ad impressions generated by 10 spots that aired over 1,200 times. “Disney Channel: Summer Fun,” advertising the Switch, was its most-seen commercial with over 137.7 million impressions. Three of the networks with high impression-counts included Disney Channel, Nick, and Nick Toons, while some of the top shows were SpongeBob SquarePants, The Loud House, and Big City Greens.

At No. 2: Rockstar Games, which had 80.3 million impressions generated from 184 airings of a single spot: “Grand Theft Auto Online: The Diamond Casino & Resort TV Spot, ‘Open for Business,’” featuring music by Eddie Murphy. CNN, Discovery Channel, and FX were three of the top impression-generating networks for Rockstar Games, while top shows included The Late Show With Stephen Colbert, The Tonight Show Starring Jimmy Fallon, and Snowfall.

At No. 4: THQ Games, which had 5.3 million impressions generated by two ads that aired 73 times. With 3.2 million impressions, “All You” was its most-seen spot. During the period measured, THQ stuck to just three networks for its advertising — NBC, NBC Sports, and MavTV — while programming with high impression-counts included FIVB Tokyo Women’s Volleyball Qualification 2019, Motorcycle Racing, and Motocross Racing.