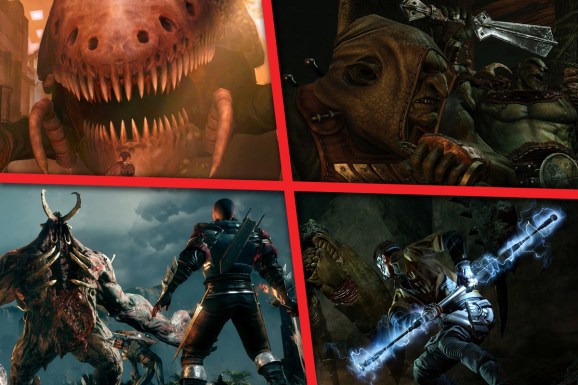 Last month, Bigben Interactive made an intriguing acquisition: Spiders, a French studio that specializes in action-role-playing games. It’s just another move behind the French company’s ambition to become a leader in the Double-A publishing market.

This started with its own internal expansion, followed by the acquisitions of Cyanide (and with it, Big Bad Wolf), Eko Software, and Kylotonn last year. In an interview with Game Industry.biz in May 2018, Bigben head of publishing Benoît Clerc said that he wanted to put out “12 and 15 games every year, and have up to half of those be developed internally.”

The addition of Spiders should help Bigben reach this goal, especially once their new acquisition releases Greedfall, an RPG that Focus Home is publishing on September 10.

Being a fan of Spiders’ work — I especially enjoyed 2012’s Of Orcs and Men and 2014’s Bound by Flame and  — I wanted to talk with Bigben about how this RPG-centric studio fits into its long-term plans. I chatted with Clerc a couple of weeks ago. This is an edited transcript of our interview.

GamesBeat: Why is Spiders a good fit for Bigben at this point in your cycle?

Benoit Clerc: Spiders is a good fit for Bigben in the same way Eko was a good fit and Cyanide was a good fit when they were bought last year. As far as Spiders specifically, it brings to our portfolio a new expertise that wasn’t on board with Cyanide, Eko, and Kylotonn, which is the role-playing game expertise Spiders has been building through the years. They’re now among the double-A studios around the world with a strong knowledge in this genre. It’s a genre that is personally one of my favorites, and it’s an extremely important one for Bigben’s portfolio, it’s an extremely important genre. We know we have ideas to bring to the table and bring to the market. We can propose several games around the genre.

GamesBeat: Cyanide has been doing some RPG work lately, too.

Clerc: They have. But Cyanide is, if I may say so — they’re like a Swiss Army knife. They’ve built real expertise in a few genres, like sports simulations and sports management, with Tour de France and Cycling Manager. They’re also very strong in infiltration games with Styx. Turn-based is also something they know very well.

But Spiders is really very focused on action and RPG. This is the only genre they’ve been working with. When you’ve been doing something for 15 years and only doing that, you’re an expert. You’re really strong in this field. Cyanide has a few genres in which they’re strong, and they’ve been producing and developing some RPGs. But that’s not the only genre where they’ve focused their efforts during the past few years.

GamesBeat: Where does Bigben see itself after this acquisition — as an indie publisher, or a double-A publisher?

Clerc: I’d definitely not say we’re an indie publisher. Of course, I have a lot of respect for indie developers and publishers. I’m a big player of those kind of games. I love them. But we’re definitely, and we want to be, a very serious double-A publisher in the years to come. We want to be the first double-A publisher in the world in three-to-five years. That’s the ambition we’ve set and publicly vocalized. 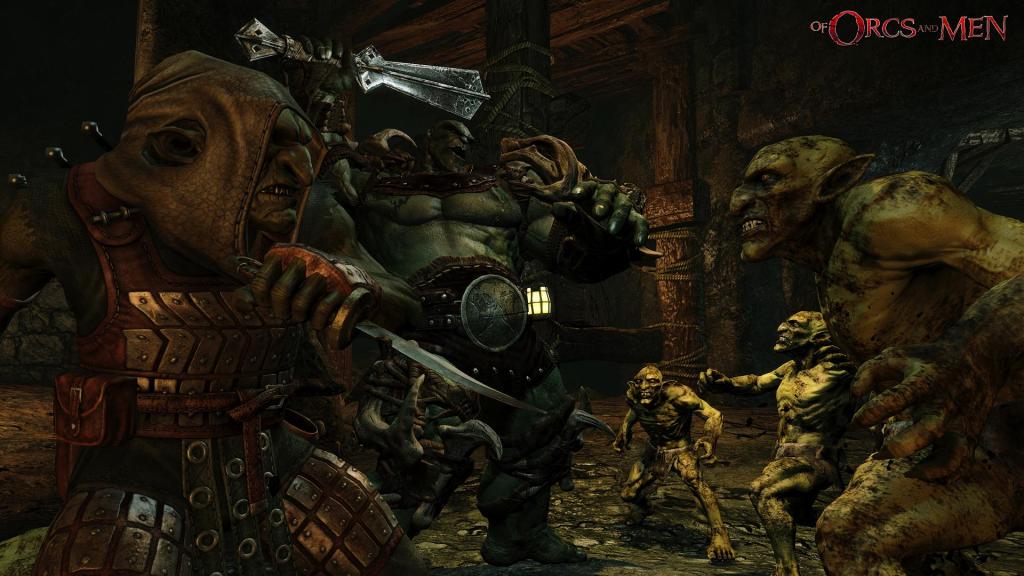 Above: Spiders can tell a story from the Orcs’ point of view, too.

GamesBeat: Why is double-A making a comeback? Why do you think the game industry is in a good spot for the double-A studio or publisher to return?

Clerc: I’m not sure there’s really a comeback for double-A? There have always been — we’ve been using different words to say double-A. When I was working in the industry 25 years ago, we were talking about mid-price, for instance, or medium-range. But it was the same thing. Those games are more visible, if I may say so. We’re using the term double-A or mid-publishing as something which is now of value, because the creativity and the difference is more on the indie and the double-A scene than it is on the triple-A scene. The stakes are so high for the big ones that they’re fighting on the size of content, the tech they’re using, the features that they’re proposing, the post-launch activity that they’re giving to their community.

They’re delivering great stuff, of course. Don’t misunderstand me. But they can’t take that much risk on the creative side. For us and for the indie guys, in order to exist on the market, since we can’t compete on the money side, we need to make a sidestep all the time. We need to say, OK, we want to produce an RPG. We want to produce an action-adventure game. We have in front of us the big productions that the majors are proposing to their customers. What can we do differently? What can we propose that will not be on the heavyweight side, but more in the middleweight category, which is our category. The expression I’ve used in the past, which I think delivers the proper message, we want to be the middleweight champion. We have things to propose in this category which will be different, which will propose to gamers different emotions, different game mechanics, different universes, different things.

GamesBeat: If you consider yourself a middleweight, what other middleweights are you fighting right now?

Clerc: I wouldn’t say that we’re fighting anybody. Of course we’re in a market and this is a competition. We need our games to be at the forefront, so I wouldn’t say that this is simple life that we’re living. But this isn’t a fight. There’s room for everybody, really. The market is in very good health. There are more and more people around the world that want the kind of high-quality premium experience on console and PC. Those are the machines where we’re developing our games, because those are the premium machines in terms of experience. Those people, the gamers around the world, they’re more and more numerous. The fact that we propose more content and more publishers are working in this field isn’t a problem, not at all. So to answer your question, I think the mid-publishers nowadays are companies like 505, like Paradox, like Focus, those kinds of people. THQ Nordic, maybe, even if some of their productions are a little bit higher. 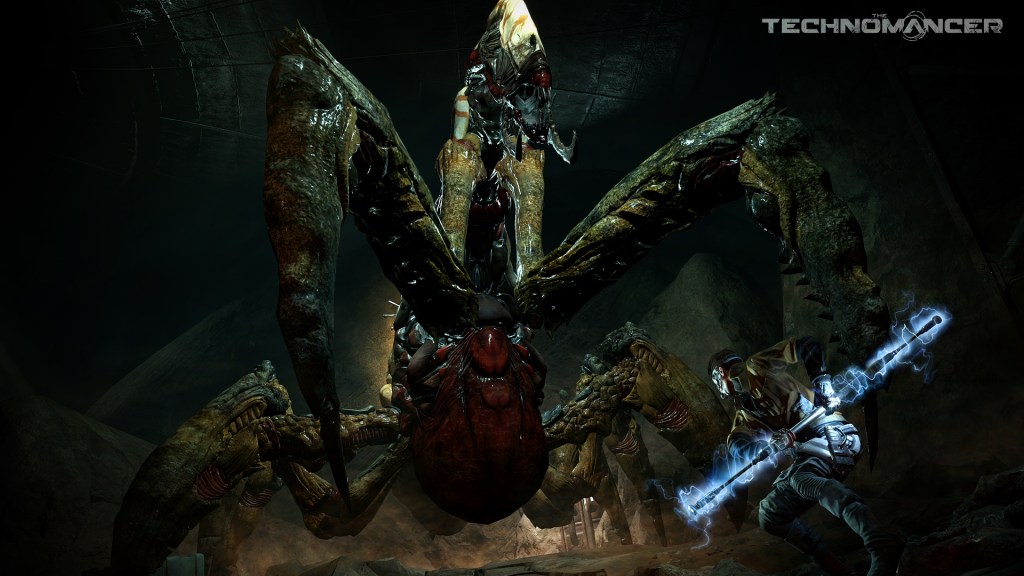 Above: The Technomancer turns you into a techno-Jedi-like character.

GamesBeat: With Spiders, it looks like you’re starting to build an RPG catalog. That was already starting with the work that Cyanide was doing, with Big Bad Wolf and Eko. Why are you getting bigger into RPGs?

Clerc: Big Bad Wolf is indeed an RPG, but it’s something we’d call a narrative RPG. It’s unusual in that they’re proposing — this is a perfect illustration of what I was saying about the need to make more creative and different things, to make a sidestep when we’re making a creative proposal to our gamers. Spiders, they’ll do action games, because combat is an important part of the RPGs they’ve been producing in the past. In Technomancer you had a strong fighting system. We’ll be digging more into this field. They’ll also keep digging into the RPG segment. Kylotonn, among our developers, is the racing specialist, working on most of our racing titles. Year after year they’ll be producing a better engine for this category of titles, better physics, better rendering, better everything, because they’re doing the same thing over and over with more passionate people, making better racing games.

We want to do better RPGs with Spiders. We want to do the best hack-and-slash on the market with Eko, the best sports games with Eko as well. We’ll be producing more sports games. In order to survive in the years to come, we need to propose to gamers in each of those categories the best game made by the most passionate developers in those specific fields all the time. That’s how we see things.

GamesBeat: Spiders works both with fantasy RPGs and more futuristic RPGs. What do you like about their catalog? What was it that was attractive about those games?

Clerc: They’re world creators. Jehanne Rousseau, the head of the studio, is blasting me out with the imagination with which he’s fueling their creations. The worlds, the characters, the situations, the narrative, everything is — they’re fleshing out worlds of fantasy like no one else. Or maybe not no one else, but very few people.

GamesBeat: Is there a single game or a single world they’ve created that drew you in particular?

Clerc: Personally, this is always a difficult question, because of course I’ll get some hate from the team. [Laughs] But I’d say that maybe Bound by Flame was quite cool to me. I like heroic fantasy, but that’s my personal choice.

GamesBeat: Bigben has never published anything from Spiders before the acquisition, right?

Clerc: That’s true. They’ve always been working with Focus Home as a publisher.

GamesBeat: Where does Greedfall fall into this acquisition? Was that a game you looked at and said, we really want to publish this?

Clerc: No, no. They’ve been very faithful to Focus, working with a very good publisher. I have a lot of respect for what Focus has been doing through the years and what they’re still doing today. I’m looking forward to their games and playing most of them very regularly. Greedfall has been signed by Focus and developed by the Focus team, and it will be published by the Focus team. We respect, even after the acquisition, the contract that Spiders have with Focus. It’ll be respected until the end of production. The game is a Focus game. 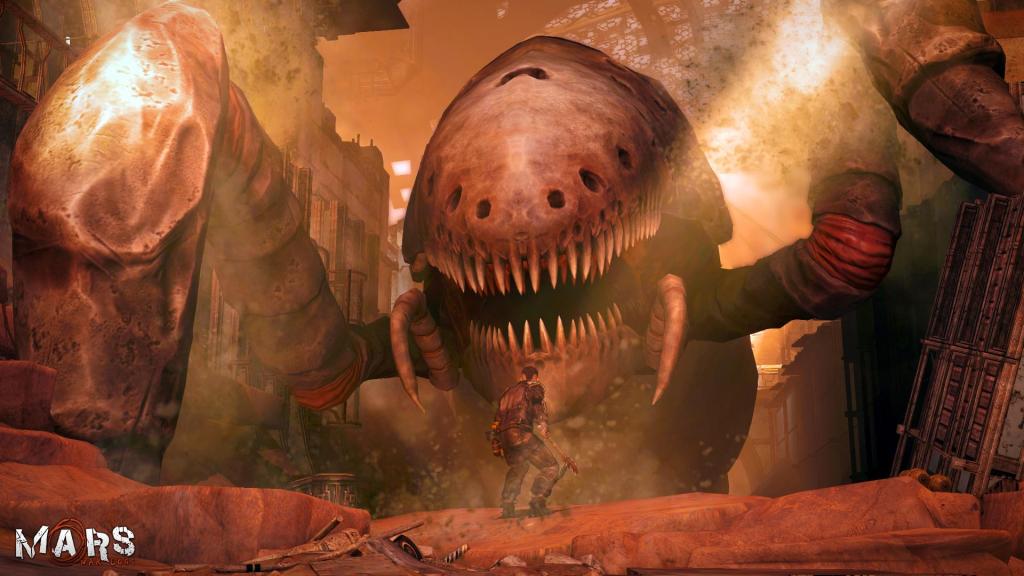 Above: Spiders like its big beast, be it in fantasy games like Bound by Flame or sci-fi RPGs such as Mars Wars Logs.

GamesBeat: How long before Spiders announces the first game they’ll make for you?

Clerc: Recently, I talked with Jehanne Rousseau all day long, working with the two creative proposals that she and her team have been working on. I’d guess that in six to nine months from now you’ll have that information.

GamesBeat: You’ve been growing the last year and a half. This is now three studios. Are you still in an acquisition mode, or do you think Bigben is big enough at the moment?

Clerc: No, definitely not. We do think that there are other fields in which we want to be a serious player. There are other genres in the game industry, and we think that there are other genres and proposals that we have to make, even some genres that are not defined as genres today that we have in mind. I mentioned the narrative RPG, which is a big sidestep for those two genres, mixing them with equal balance, the RPG elements and the narrative elements. We have other ideas, and we think we need other experts. The strategy will always be the same when it comes to developer acquisitions. We want people who are the most passionate in each genre, people that want to become the best of the experts in their specific genre.

GamesBeat: Good luck with bringing Spiders into the fold. I really like their games. I really liked Chaos Bane, that you guys just put out. I hope you continue to grow, and I look forward to covering you more in the future.

Clerc: There’s no luck in production and development of video games. [Laughs] It’s just hard work. It’s the only thing that’s involved. In an RPG you throw dice, but when it comes to game development, you never throw dice. You work. That’s all.

Correction, 8:52 a.m. Monday: A previous version of this story published instead of the edited version. We’ve fixed the error.