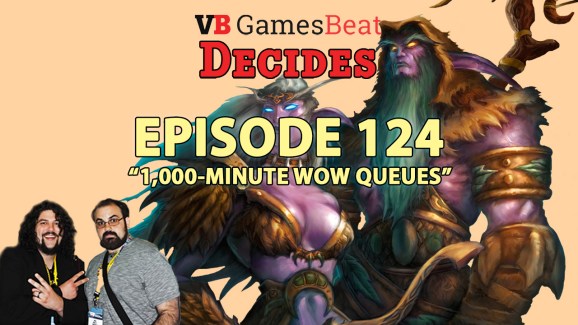 GamesBeat Decides is back once again to make the world of video games so simple that even a child could understand. Children, however, should not listen to this show because it features grown man and GamesBeat review editor Mike Minotti cursing god for not letting him onto a server to play World of Warcraft. He is still playing Fire Emblem, though — as well as Bloodstained and Overwatch. PC gaming editor Jeff Grubb, meanwhile, is ready to talk about Ancestors: The Humankind Odyssey, which he admits most people won’t like even though he is infatuated with it. Join us, won’t you?

In the news, the crew talks about Stadia, Gamescom, and Nintendo’s Indie World. That includes tidbits about Kerbal Space Program 2 and Humankind, the first real Civilizaiton competitor in years. And then Jeff and Mike try to figure out if Geoff Keighley is still Hideo Kojima’s best friend based on his appearance in Death Stranding.

In other news stories, World of Warcraft Classic is having a massive launch. Mike somehow works through the pain to speak to that. And then the Persona series has hit a new milestone, Sony acquires Insomniac, and is PlayStation going to save the Uncharted movie? Probably not!

WHAT WE’VE BEEN DOING