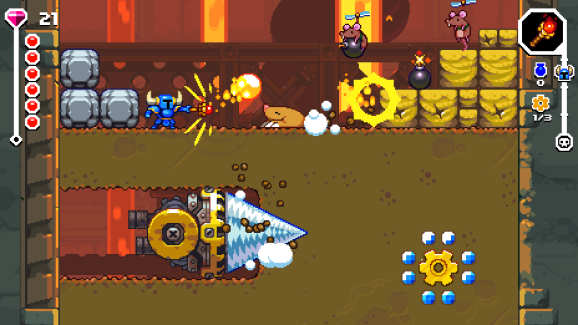 Shovel Knight debuted in 2014 and became a big hit, selling over 2 million copies. Yacht Club has supported it with massive downloadable content updates that add whole new playable characters and campaigns. The last of these, King of Cards, is coming in December.

Shovel Knight Dig, however, is the first new entry in the series. It is not a full-flown sequel — it’s a spinoff. While the original Shovel Knight focuses on clearing linear stages, similar to classics like Mega Man or Castlevania, Dig uses level generation tools so that each experience will be different.

And as the name implies, you’ll be spending most of this adventure descending below the Earth. The experience has some roguelike and role-playing game influences, as you can unlock new upgrades and items during your adventure.

British indie developer Nitrome is helping Yacht Club make Dig. Nitrome specializes in pixel-based games. Most of its titles are hosted on its website for free.