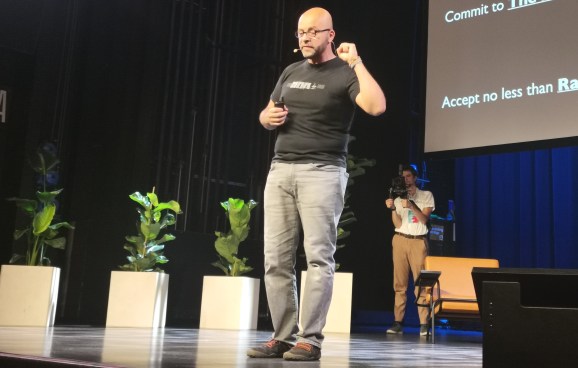 “The biggest thing I learned at Google was that every problem is a trillion-dollar opportunity,” said Mo Gawdat, former chief business officer at Google X, who left the company in 2018. “If you can solve a problem, you can actually change the world — and make a lot of money in the process.”

Speaking at Digital Frontrunners, a one-day conference held in Copenhagen this week that focused on the impact of AI and other next-gen technologies, Gawdat took to the stage to discuss how entrepreneurs, companies, and even nations can solve some of the world’s biggest problems. According to Gawdat, it all comes down to mindset.

“There’s almost no problem that can be thrown at us today that we couldn’t solve with technology,” he said. “There may be an economic barrier [preventing this], but the other reason why some nations innovate and some nations don’t is what I call the mindset challenge.”

Referring to the Six Thinking Hats ethos proferred by Edward de Bono in the 1980s, in which “black hat” thinking focuses on why something might not work, in contrast to the more positive outlook of “yellow hat” thinking, Gawdat compared some of the major developments from Silicon Valley with those of other markets around the world.

“The mindset challenge is, if you wear the black hat first, you start to end up with incremental innovation, you start to prioritize the stuff that you can actually do easily within your capability,” Gawdat said. “So a nation like Korea [for example] would develop better and better LED TVs, instead of reinventing the TV altogether, and that mindset challenge needs to be understood differently.”

At the core of this philosophy is a theory that says if you focus too much on what’s not going to work, you’ll fail to find radically new solutions and achieve a grander vision.

“We tend to look for what’s not going to work first,” Gawdat said. “And when we do that, we end up not working on the problem — because we think of the problems, we don’t think of the possibilities that are associated with the problem.”

Gawdat joined Google in 2007 to help the company expand in emerging markets across the EMEA region, but he later became chief business officer at Google X, the internet giant’s “moonshot” division, which develops futuristic technologies that seek to solve some of the world’s biggest problems. X became a subsidiary of Google’s new parent company Alphabet in 2015.

Long before Gawdat joined Google’s secretive R&D unit, however, the company set about developing the building blocks for autonomous vehicles, which paved the way for a new Alphabet subsidiary, called Waymo, in 2016. Waymo unveiled its first commercial driverless car service back in December. One of the core benefits of autonomous vehicles, according to the companies creating them at least, is that they will help reduce road accidents more than any other safety feature introduced in the past century — more than seat belts, more than anti-lock braking systems (ABS), more than any other crash avoidance technology. Why? Because the vast majority of road accidents are caused by human error.

“Google came out and said 90% of the reason why we have accidents is human error, so maybe we should replace the human and have self-driving cars,” Gawdat said.

Rather than incrementally improving on existing safety systems, self-driving cars tackle the single biggest cause of car crashes globally by removing the root cause of most road accidents. But the process has involved developing much of the technology from scratch, from hardware to software and artificial intelligence.

This underlines a key takeaway from a talk designed to inspire up-and-coming entrepreneurs and startups: Assume that everything is possible, commit to fixing the problem, and accept nothing less than radical innovation.

If all the companies working to bring autonomous vehicles to market had rejected the notion of removing humans from cars due to technological barriers, then self-driving cars would still belong in the science fiction realm. As things have transpired, the global autonomous vehicle market is pegged at more than $50 billion today, according to a recent Allied Market Research report, and is expected to grow ten-fold within seven years. Looking further into the future, the market could be worth $7 trillion by 2050, according to some estimates.