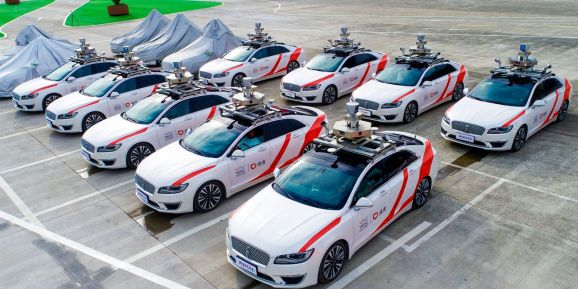 China's Didi is piloting a robo-taxi service in Shanghai

Chinese ride-hailing giant Didi Chuxing (Didi) has announced plans to pilot a self-driving taxi service in Shanghai, weeks after spinning out its autonomous driving unit as a standalone company.

On Tuesday of this week, the Shanghai government greenlit Didi’s push to test its fleet of autonomous vehicles on public roads.

Didi, for the uninitiated, emerged back in 2015 following a merger between local rivals Didi Dache and Kuaidi Dache, with the combined company now the market leader in China by a considerable distance. As an aside, Uber unfurled a white flag over its Chinese ambitions back in 2016 when it sold its local unit to Didi in a $35 billion deal, and in the intervening years Didi has doubled down on its global ambitions via a number of international launches — with Uber firmly in its crosshairs.

Like Uber, which has been investing heavily in autonomous driving technology, Didi has been ramping up its ambitions in the driverless car sphere, and in early August it revealed a new independent self-driving vehicle entity designed to expedite its R&D and real-world implementations. The unit now employs 200 people, working across the various facets of autonomous vehicle design and development, including HD mapping, security, behavior prediction, infrastructure, and more.

Speaking at the World Artificial Intelligence Conference in Shanghai this week, Didi CEO and founder Cheng Wei revealed specifics about Didi’s “robo-taxi” initiative, with riders able to hail a self-driving car through the Didi app.

Above: Didi is launching a robo-taxi pilot in Shanghai

Didi said it will deploy 30 different models of level 4 autonomous vehicles, which will include human safety drivers, on roads in the Jiading district of Shanghai.

“Technology only has worth when it brings value to people’s lives,” Cheng said. “We believe giving ordinary citizens access to large-scale, shared autonomous fleets is key to achieving our shared goal of safety, efficiency, and sustainability for future cities.”

A number of companies are working to bring fully autonomous vehicles to roads around the world. The most advanced and high-profile of these is Alphabet subsidiary Waymo, which unveiled its first commercial driverless taxi service last year, with further expansions firmly on its agenda. Last year, Russia’s Yandex led the European autonomous vehicle charge with the first public pilot of a robo-taxi service, and it recently committed to putting 100 driverless cars on roads by 2020. Japanese companies are also turbocharging their efforts to get autonomous vehicles on roads in time for the Tokyo Olympic Games next year.

Didi’s latest move fits into the broader global push to make autonomous vehicles a reality — with the claim of “first” conveying strategic advantage, from both a global and local perspective.