Grid’s been the in the garage for five years, missing most of the PlayStation 4/Xbox One generation of games. This series is all about “sim-cade” racing — a midpoint between games like Gran Tursimo and Project Cars. Its last release was 2014’s Grid Autosport. But Codemasters and Deep Silver decided it’s time to dig the keys out of the junk drawer and bring Grid out of the garage.

I took a spin through the digital streets of San Francisco (I swear I raced by a Walgreens) in a souped-up Mustang. It felt good, and browsing through the options showed a variety of cars from the 1960s to today … including NASCAR racing trucks. (In my days covering auto racing, nothing was a loud as a truck race.) You’ll see this variety if you pick Grid up when it release October 11 for PC, PlayStation 4, and Xbox One.

Sadly, I didn’t get a chance to interview Codemasters principal games designer Simon Barlow in person. But he did answer some questions I sent him.

Like why the Grid (also known as Toca) series hadn’t hit the streets in five years. Turns out it was just a resource issue.

“There’s no real definitive answer to this other than simply us working on other titles such as the Dirt Rally series,” Barlow said over email.

Which naturally lead me to the one question rattling in the back of my mind: Why bring Grid back now?

“We felt that this brand of accessible, dramatic ‘sim-cade’ motor racing had been missing for too long, and that Grid’s unique take on the genre still had something important to say,” he said. 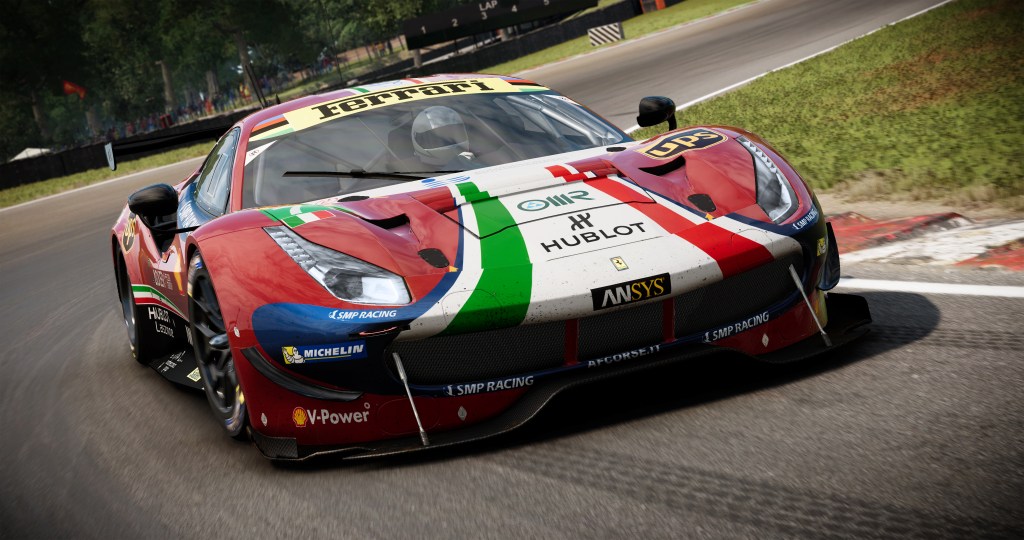 Above: It’s not a racing game without a Ferrari.

Sim-cade is a midpoint in racing games, one that’s a blend of serious sims where cars behave closer to their on-the-road counterparts but are easier to control (no racing wheels needed here, folks). Barlow breaks down what it means better than I ever could.

“It’s not a term I’m always comfortable with but it is one synonymous with the Grid series. I’ve always taken it to mean authentic racing — real cars, real tracks, believable handling — with more accessible gameplay and a ‘hyperreal’ presentation,” he said. “We always build on top of a rigorous simulation model and apply layers of physics-based assists to give us a more lean-back, pad-first experience without compromising on the ‘serious fun’ racing action.”

And it turns out one of the best reasons to bring Grid has to do with who the competition is right now.

“At the moment, none! As flippant as that sounds, nobody is really making racing games like this anymore — perhaps Driveclub was the last real ‘simcade’ racing game to still focus on the racing,” he said.

The demo I saw had cars dating back to the 1960s — muscle cars like the Ford Mustang and the Chevrolet Camaro. I wondered if we’d see anything from an earlier time.

“We have a wide variety of vehicles from across the last few decades, mostly stuff that really excited us or that had a massive impact on the world of real-life motorsport. The ’60s is probably the decade that motor racing – and fast cars in general – became mainstream, and so it seemed like the best place to start our journey too,” he said.

I also became intrigued by seeing racing trucks in Grid. I wondered if we’d see any other odd ducks in there. And one of this is Barlow’s favorite car.

“Variety is one of the key pillars of the game, so you’ll find everything from classic Minis to the incredible custom one-off cars of Time Attack —  a category of car, the top-tier of the Modified class. They are raced on Sydney Motorsport Park in a beat-the-clock competition. The cars are highly tuned and utterly unique! — those things are crazy,” he said. “Having just mentioned the Time Attack cars, it would be remiss of me not to mention Rob Nguyen’s incredible Honda CRX MightyMouse. So much horsepower through those front wheels!”

I’m just hoping that one of those odd ducks will be an actual duck car.