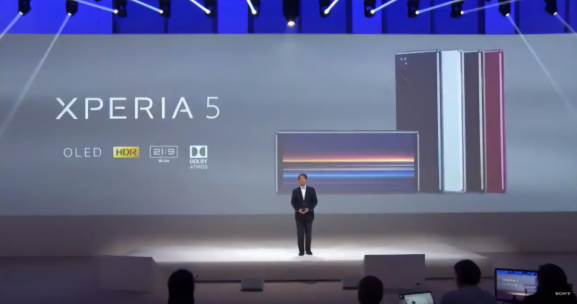 Sony typically announces a smartphone to fill out its mid-range portfolio early in the fall, and the Tokyo company has upheld tradition once again. During a press conference at IFA 2019 in Berlin, Sony debuted the Xperia 5, chiefly distinguished from its predecessor, the Xperia 1 — which launched at Mobile World Congress earlier this year — by a slightly more compact body.

Other spotlight features are exclusive wireless support for Sony’s DualShock 4 controller from the PS4 in titles like Fortnite, which will come to the Xperia 1 via an over-the-air software update. According to Sony, the Xperia 5 will be available in four colors — black, blue, white, and magenta — in Europe starting on October 4 for €799.

Sony’s offering free WF-1000 XM3 headphones to those who preorder.

Front and back Gorilla Glass 6 shielding run parallel, curving at the edges toward the lip of the phone’s IP68 water- and dust-resistant frame, and noticeable (but not inordinately large) bezels buffer the 6.1-inch FHD+ (2,560 x 1,080 pixels) OLED display’s top and bottom, flanking narrower borders to the left and right. Its left side houses the volume rocker and power button (which sandwich the fingerprint sensor), and the trio sits up from a dedicated shutter key that doubles as a shortcut to the camera app. 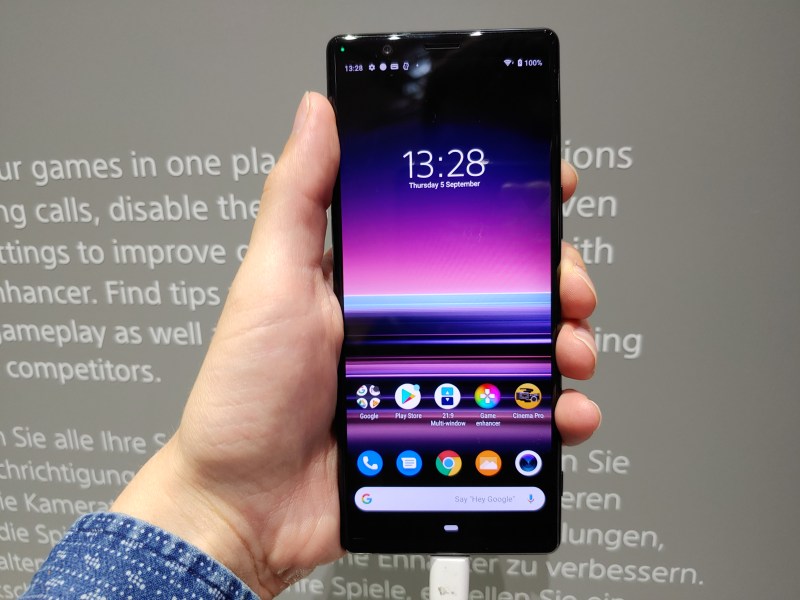 Above: The Sony Xperia 5.

The Xperia 5’s HDR-compatible display has an ultra-wide 21:9 aspect ratio, the same designed to show films shot in CinemaScope and the modern anamorphic format 2.29:1. As with Xperia displays before it, this one draws on Sony’s Bravia TV technologies for “improved” contrast, color, and clarity.

So what’s the big deal with 21:9? Well, Sony Mobile says it’s collaborating with Sony Pictures Entertainment to bring films and TV shows shot in native 2.29:1 to the Xperia 5 without letterboxing (the black bars that fill out content that’s been squeezed into a 16:9 screen). Moreover, the company says it’s in talks with such game developers as Epic Games, Gameloft, and Tencent to optimize titles like Fortnite, Asphalt 9, and Arena Valor for the added real estate.

The Xperia 5’s other headliners are without a doubt the cameras. Sony jumped on the three-sensor bandwagon earlier this year with the Xperia 1, following in the footsteps of Huawei, LG, Samsung, and others. The module here is largely identical, save its physical position — it has moved from top of center to the left corner, a few millimeters away from the embossed Sony logo. 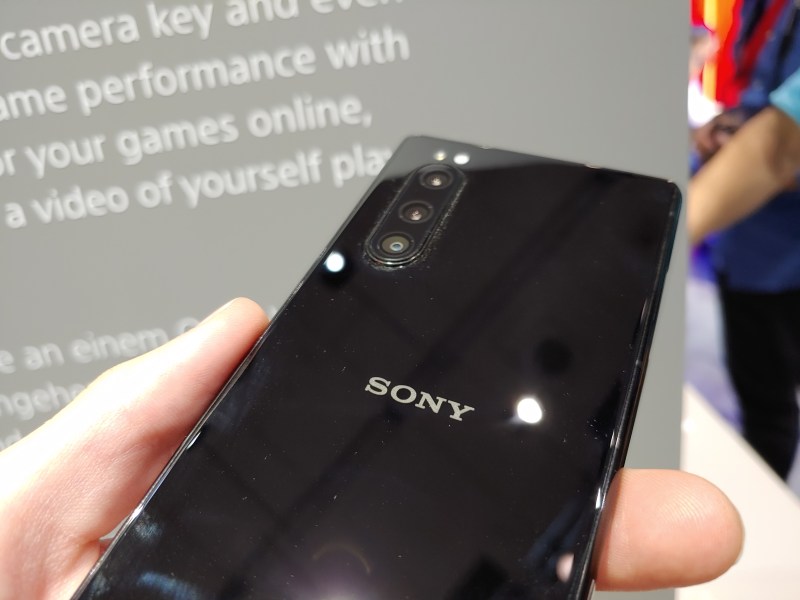 An abundance of tools are on tap in the Xperia 5’s camera app. In addition to a portrait selfie mode with adjustable sliders that slim your cheeks and enlarge your eyes, you’ll find a bokeh option that uses computer vision to approximate depth of field. They complement object tracking and an auto-capturing feature that snaps a photo when it detects a smile, plus filters like Mirror and Old Film and an augmented reality stickers mode akin to Google’s AR Stickers.

Of note is Eye AF, which leverages machine learning to lock onto a subject’s eyes and “remember” them so it can relock focus when someone briefly moves out of the frame or is occluded by an object. Sony is also touting Cinema Pro, a highly customizable capture mode designed in collaboration with the company’s CineAlta division. Both work as advertised, but it would be nice if Cinema Pro didn’t disable optical image stabilization.

At the heart of the Xperia 5 is the system-on-chip (SoC) inside the Samsung Galaxy S10 series: Qualcomm’s Snapdragon 855. It’s a substantial step up from the Xperia XZ3’s Snapdragon 845, and Sony’s flagship makes the most of it. 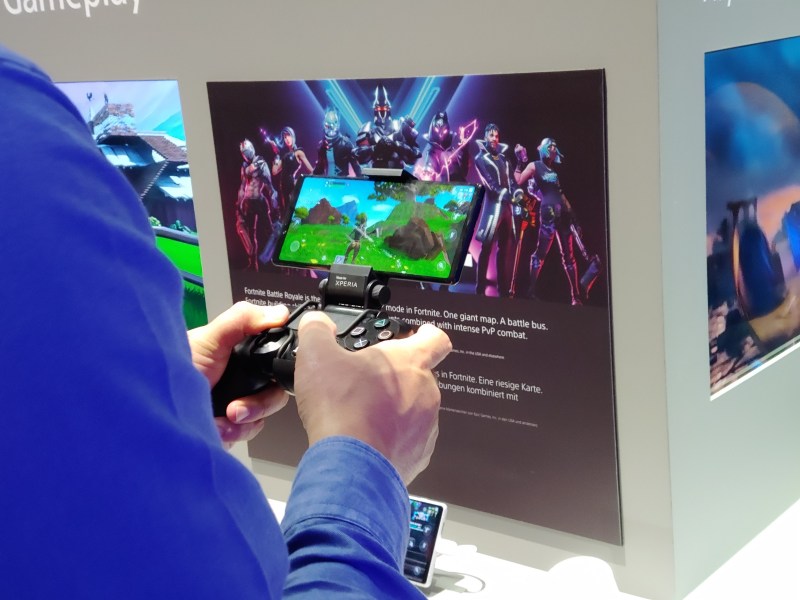 But what about the battery? While the Xperia 5 might be deficient on paper compared with titleholders like the Vivo Nex or the Motorola G8 Plus, raw capacity numbers belie its stamina. The phone’s 3,140mAh pack (which supports wireless charging) with 18W fast charging should easily last morning to night with light usage, assuming it’s in line with the Xperia 1’s power efficiency.

One new feature of note Smart Connectivity, which automatically switches to LTE if it predicts the Wi-Fi signal will become too weak in the extreme near future.

As with previous handsets in Sony’s Xperia family, audio is front and center on the Xperia 5. The handset boasts stereo speakers driven by a “smart” amplifier (the earpiece doubles as a second channel) and support for Dolby’s Atmos 3D simulated surround sound technology and Hi-Res audio (recordings with an over 44.1 kHz sample rate and a 16-linear bit depth).

Bassheads will appreciate the Xperia 5’s Dynamic Vibration feature, which analyzes sound spectrograms and translates them into haptic motor whirs. But while it’s nifty in theory, the implementation is clunkier than you’d expect, considering Dynamic Vibration debuted a year ago on the Xperia XZ2. The effect is surprisingly weak even on the maximum setting and it’s concentrated around the bottom-firing speaker (where the vibration motor’s embedded beneath the display).

The Xperia 5 ships with Android 9.0 Pie onboard, but it’s hardly a vanilla experience. Sony’s Xperia UI sits atop it and brings with it a custom home screen with an iOS-like horizontal app drawer, along with other nips and tucks.

Side Sense, a carryover from Xperia XZ3, surfaces a menu containing shortcuts to commonly used apps and settings with a double-tap of the Xperia 5’s right or left bezel. According to Sony, Side Sense’s shortcuts are informed by AI that learns which apps you’re likely to use based on your location, the time of day and day of the week, and other signals. It’s nifty when it works but frustrating when it doesn’t activate right away despite repeated taps, a common occurrence.

With respect to gaming, Game Enhancer is a Sony-designed software suite debuting with the Xperia 5 that “optimizes” the performance of supported games, Sony says, and provides one-tap access to gameplay recording features, online tip guides, and more via a menu overlaid atop those games.