Leave it to Sphero, the Boulder, Colorado-based robotics company that last month acquired science, technology, engineering, arts, and mathematics pioneer LittleBits, to announce perhaps two of the cutest new products during IFA 2019. This morning in Berlin, the company took the wraps off of the Sphero Mini Activity Kit, an accessory kit for its smartphone-controlled spherical Sphero Mini robots, and Mini Soccer, a “sporty” take on the Sphero Mini complete with cones and a soccer-ball style shell.

The Sphero Mini Activity Kit will be available for purchase on Sphero’s website and select retailers beginning October 2 for $79.99. Meanwhile, Sphero Mini Soccer will retail at $49.99 when it becomes available at select global retailers on September 16. 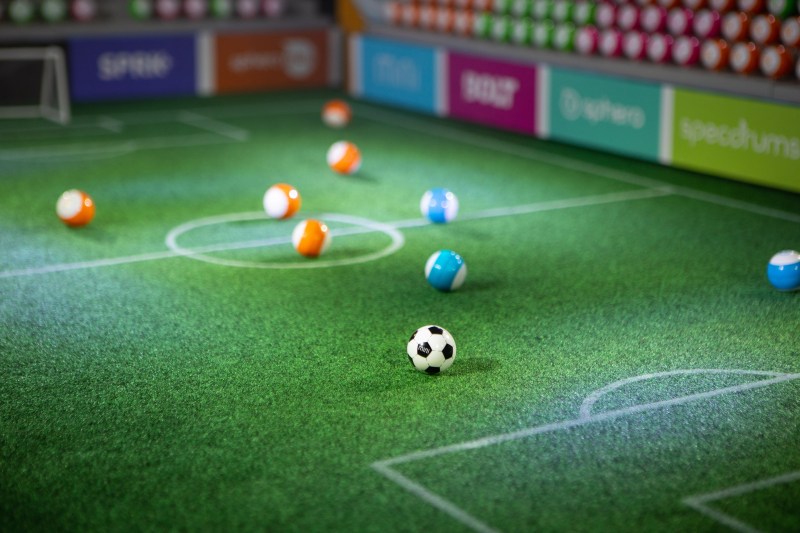 The Sphero Mini Activity Kit features games and 15 step-by-step lessons in all, along with miniature accessories with projects that sync with Sphero’s Play and Edu apps. In the box, there’s a translucent Sphero Mini packing an array of sensors (including a gyroscope, accelerometer, and LED lights), plus a rechargeable battery, buildable mazes and tunnels, pins and cones, and activity cards with guided instruction.

Advanced programmers will be able to tap the Edu app for more sophisticated coding. Within it, they’ll be able to draw paths, transition into basic scratch blocks, or write their own JavaScript scripts using actions, controls, operators and more.

So what about Mini Soccer? Well, it’s a Sphero Mini app-enabled robotic ball with a custom black and white shell resembling a soccer ball, plus eight miniature cones to inspire creative challenges. Syncing a Mini Soccer robot with the Play app lets users activate a scrimmage with Kick Drive, or program routes around the cones using Block Drive.

“Mini Activity Kit takes our popular Mini robot a step further by offering an affordable at-home learning experience that mirrors guided lessons taught in schools,” said Sphero CEO Paul Berberian. “We wanted to give kids and their parents even more tools to create, explore and invent. Sphero has always been about helping kids go beyond code to unlock their creative potential.”