It was a tragic week for the industry. Women in the game industry, fed up with sexual assault, rape, and abuse, named a half-dozen men in the game industry as their abusers. One of the alleged perpetrators, Night in the Woods co-creator Alex Holowka, died, reportedly by suicide, after fellow game developer Zoë Quinn accused him.

Those sad events in turned caused an eruption of finger-pointing on social media that still hasn’t died down. Those who supported the men being named said their lives were being ruined with hearsay, and the women who accused them said they were not letting the transgressions go unchallenged and were speaking out to stop the men from ruining the lives of other victims.

It is part of a cycle of allegations and counter-allegations, and when you are in the middle of it (like we are now), it is hard to see how it is ever going to end. It reminds me of the words of Bob Dylan’s song, “All Along the Watchtower,” — “There must be some way out of here, Said the joker to the thief. There’s too much confusion. I can’t get no relief.” It made me wonder. Where did our safe space go? 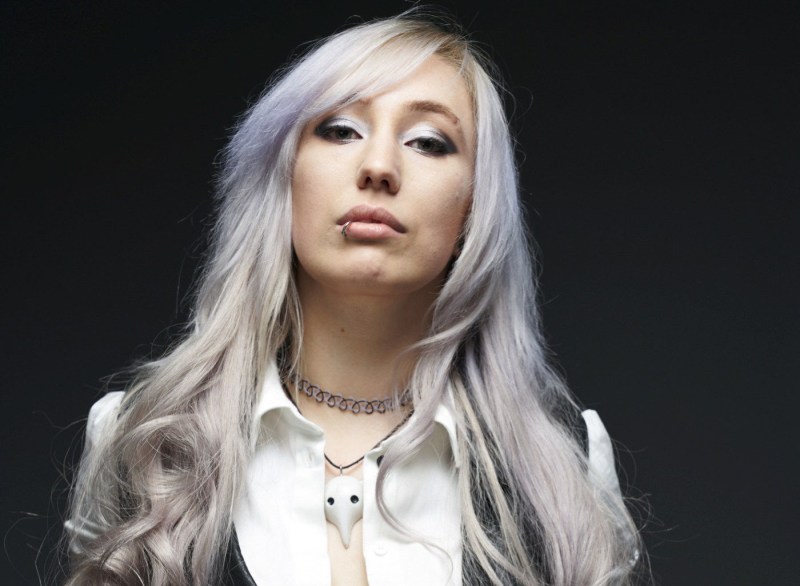 This round of accusations began on August 26, when developer Nathalie Lawhead accused The Elder Scrolls V: Skyrim composer Jeremy Soule of rape.

Postin on Twitter in solidarity with Lawhead, Quinn posted an allegation of abusive behavior about Holowka for abuse that reportedly happened eight years ago. Then, over the weekend, Holowka’ sister said he had died.

Facing her own Twitter storm, Quinn tweeted, “My brain is fried and I’m gonna dip out of social media for a bit because I’m self-destructing over all this a bit, but my heart breaks when I see another survivor or a person who I don’t think played any part of what happened to me apologizing for it. Shits hard. Love to y’all.”

Rami Ismail, cofounder of Vlambeer and always a courageous voice in the indie game community, tweeted, “Oh, and let me make absolutely clear: everyone single one of you that decides that now is the time to weaponize this tragic news against the brave people stepping forward with their trauma and hurt, you can absolutely 100% go fuck yourself.” 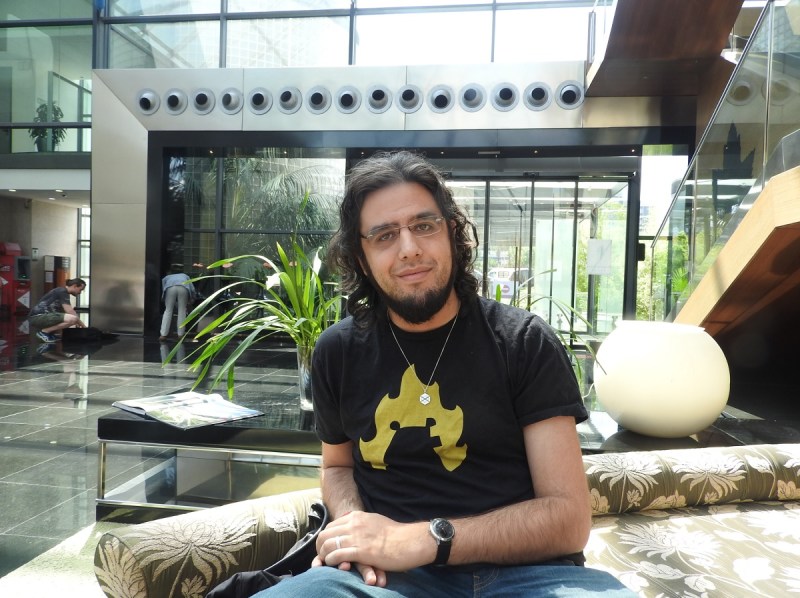 Above: Rami Ismail is cofounder of Vlambeer.

Like everyone, I would really like this sad situation to go away and be forgotten. But we are reaping what we sow. If someone engaged in bad behavior that happened in the past — the chickens are coming home to roost. That’s why I feel like, as much as we would like to ignore some of this outrage or not participate in the meltdown, the seeds for this week were planted with abuse that happened years or even decades ago. I think we would like to defuse the tension, but we can’t just cut off the conversation about people who are bringing grievances forward.

If this round of allegations encourages others to come forward with their own stories of mistreatment, then it brings some light to the darkness. We should let what needs to come out to come out.

The International Game Developers Association (IGDA) and the IGDA Foundation put out a call, saying the nature of the traumatic events of the week “compels us to take action and to offer immediate support to those who are affected.”  They reminded us there are ways to de-escalate and cool down.

The groups said, “The trauma and abuse that are currently news in the game community are horrific and can resurface memories and feelings which survivors of trauma prefer to leave in the past. It is important to acknowledge that these events and accounts can produce a wide variety of emotions and reactions. It can be very difficult to reconcile conflicting emotions without reacting strongly or quickly. These feelings are normal.”

And it added, “Harassment of any kind is terrifying and has very real consequences. These consequences can manifest differently for every person and can range from short-term discomfort to debilitating long-term trauma. Suicide is tragic and traumatic for those left behind. It is estimated that every suicide affects about 135 people – and everyone’s grief is very real. It is also important to understand that suicide is not caused by a single event or traceable to a single cause. It is the result of an accumulation of factors, often very complex. It is important to reiterate that everyone deserves help and safety, no matter what.”

The groups closed with the cautionary note: “If you or someone you know is in crisis, in need of immediate intervention, and based in the US, please visit the National Suicide Prevention Lifeline or call 1-800-273-8255. You can also text AFK to 741741 in the US.” 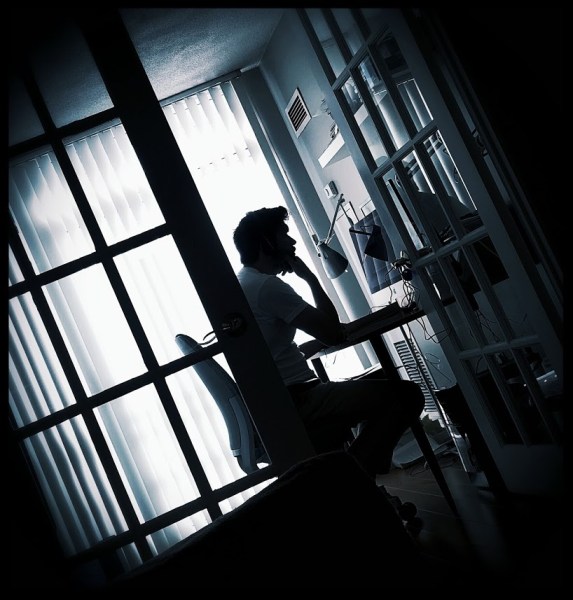 Above: Scott Jones is creator of Heavily Pixelated.

Scott Jones, a veteran TV host and game journalist, launched Season 2 of his Heavily Pixelated, a podcast about gamers and their most vulnerable moments, and how video games helped them get through this time. It is a wonderful set of stories, told in a human and non-judgmental way. The first episode of this season is a healing conversation about father Simon and daughter, Abi — and how playing games together helped Abi come down from her suicidal tendencies.

Jones is helping Mark Chandler and Take This to organize the game industry’s first mental health event in October, the International Gaming Summit on Mental Health.

Chandler and I talked for a couple of hours about this event, how he fell down his own hole, how his mother saved him, and how he began a healing process.

“It was through that sharing in the industry that people started reaching back to me, or reaching out to me and telling their stories, and that was how this came about,” Chandler told me.

And he reminded me how much I loved playing Hellblade: Senua’s Sacrifice, an award-winning game from Ninja Theory that debuted in August 2017. Ninja Theory crafted that game over four years, infusing swashbuckling fantasy game with a realistic depiction of a character suffering from psychosis — or seeing things in the world that aren’t real. Senua can’t tell whether the demons she sees with her eyes or the voices in her head are real or not, and I’m convinced that only a video game could make us see the world in the way that she did.

It was a disturbing game in so many ways, but a validating one as well. Perhaps, one day, we’ll see someone create an artistic video game related to this week, much the way that Arthur Miller created The Crucible after the McCarthy anti-communist witch hunts of the 1950s.

Ninja Theory received a grant from health care firm Wellcome Trust, and it consulted with Paul Fletcher, a professor at Cambridge University who was a leading expert in psychosis. He became an adviser to the studio as it made the game, and he’s an adviser for Chandler. 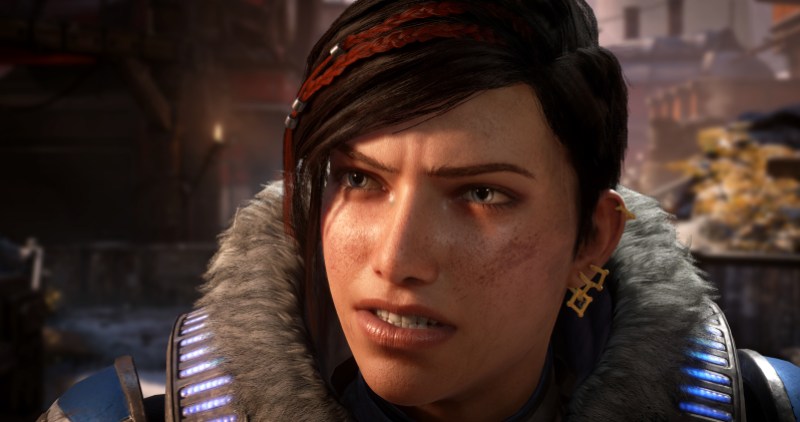 Above: Gears 5 Kait Hero Close Up

Here is a recommendation for all of us. It is good to remember that it was also a great week for video game debuts. We can salvage some happiness and heal our broken minds and hearts by playing games. I’m a news person. But even I highly recommend that we unplug from terrible news before it affects us too much. We don’t need to watch 10 hours of hurricane news, particularly if it is far from us. Instead, once you’ve absorbed the horrible news as much as you can, then go out and play something wonderful.

The joy we get from games is the best medicine. I highly recommend you go out and play Gears of War 5, Blair Witch, Ancestors: Humankind’s Odyssey, Control, Wolfenstein: Youngblood, Discovery Tour: Ancient Greece, and The Dark Pictures Anthology: Man of Medan. Pick your poison. Escape from this world for a little while and lose yourself in the blissful forgetfulness and fantasy that only games can give us. Gaming is your safe space.