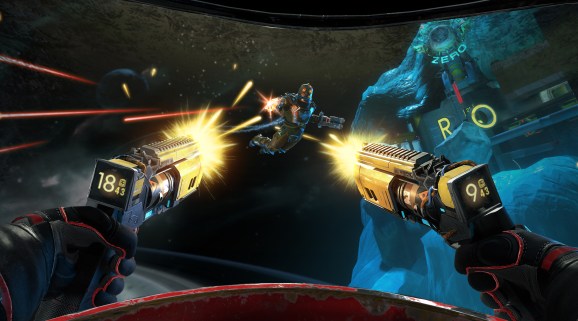 Space Junkies is a new sci-fi VR game from Ubisoft.

It would seem like last-ditch efforts to bolster Ubisoft’s Space Junkies have fallen flat.

An update last week marked the end of development of the zero-gravity VR shooter. Since launch earlier this year, the game had received several updates adding new maps, modes, and more. Writing in a blog post, developer Ubisoft Montpellier said it was “proud to have achieved” what it set out to do. The game’s first season of content came to a close in July.

“The game servers will remain open and accessible to players who purchased the VR version of Space Junkies so that Spacers can continue to take on each other in the many community tournaments we’ve seen since launch,” the team wrote.

In Space Junkies, up to four players jumped into arena-style deathmatches. The game had an arcade influence that separated it from similar titles like Echo VR.

Interestingly, Ubisoft Montpellier also confirmed the non-VR version of Space Junkies would not be coming out. The studio launched a beta for the standard version back in July. No reason was given for why the non-VR version was effectively canceled.

The non-VR beta looked to be one of several efforts Ubisoft made to grow Space Junkies’ audience. While we were quite fond of the game, there were signs it may have been struggling from early on. A month after launch, for example, Ubisoft held a hefty sale for the game, slashing 60% off of its price tag.

This doesn’t mean Ubisoft itself is done with VR. In fact, just this morning we reported that the company is currently hiring for an “unannounced triple-A VR project” based on one of its existing IP.