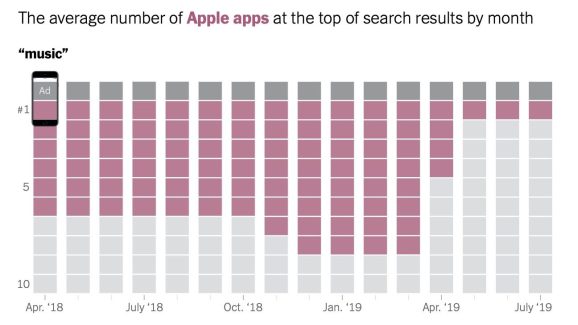 Apple’s App Store has been giving the company’s own apps an embarrassingly large promotional advantage versus third parties, researchers discovered, and key Apple executives say it “wasn’t a mistake.” But as a new report confirms today, the Store’s search algorithm was quietly changed amidst international antitrust investigations, allegedly to help other developers.

Back in July, the Wall Street Journal reported that the App Store’s search results had been top-loaded with Apple’s own apps, such that users would find Apple downloads first in 60% of categories and 95% of sales-generating categories, even when rival companies’ apps were more popular — results Apple attributed to a complex 42-factor algorithm. Yet at least one of those factors was placing a thumb on the scale, the New York Times suggests, yielding searches where large clusters of Apple’s own apps would appear at the top of categories that in some cases weren’t even relevant.

For months, searching for the word “music” surfaced eight different Apple apps before displaying other results, while “tv” spotlighted up to five Apple apps first. Meanwhile, the report notes that rival Netflix “has been stuck mostly in the hundreds,” while top music-streaming app Spotify fell out of its top spot soon after Apple Music was released, then was pushed down further by multiple Apple apps, including non-music offerings. Stitcher, a streaming audio service that thrives on Android, saw no download traffic from App Store searches for “podcast,” negatively impacting its business.

According to Apple, engineers simply didn’t notice that Apple was dominating the results and changed the algorithm once the issue was discovered. Yet Apple senior VPs Phil Schiller and Eddy Cue told the New York Times that the algorithm hadn’t been “corrected,” but rather “improved.” The company attributed its suspiciously high App Store rankings to the greatness of its apps and strong marketing, which it says leads customers to organically search for its offerings.

Now the Store is displaying fewer Apple apps at the top of results, though the results depend on a given search. Starting in mid-July, the top results for terms such as “tv,” “video,” and “maps” were no longer loaded with multiple irrelevant Apple apps, and Apple Wallet fell out of the number one spot for “money” and “credit.” Apple says the changes reflect how it’s now handicapping itself, though for developers whose apps have spent months or years underwater, the perception will be very different — and likely not enough to keep them from assisting the antitrust investigations that remain underway.