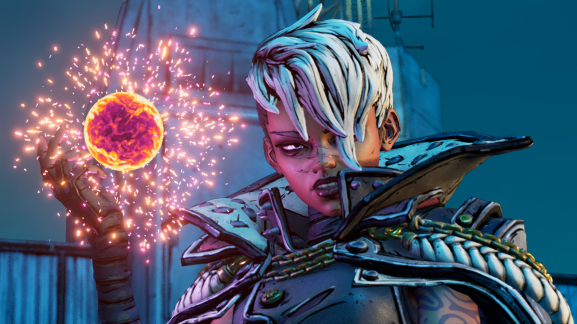 Borderlands 3 was a remarkable marketing success

Borderlands came out 10 years ago, and in some ways, it helped spur a new genre of shooters. Gearbox Software combined the fast action of a Doom or a Duke Nukem with the loot and role-playing game progression of Diablo, and we can trace the roots of Destiny, The Division 2, and Warframe to Borderlands.

And while I see the appeal of these MMO looter-shooters, I prefer playing by myself, in a world full of quests with a more cohesive narrative and a slower pace. Borderlands 3 delivers this, improving its RPG progression and gunplay along the way to its September 13 release on PC, PlayStation 4, and Xbox One. And considering that the Borderlands series sold 5 million copies between publisher Take Two Interactive’s May and August earnings periods (and sold 41 million copies overall), a demand exists for this take on shooters.

But Gearbox’s approach to humor comes off like an ’80s teen sex comedy — it hasn’t aged well, and at times, I found it offensive.

This time around, you leave Pandora as you chase the chaotic Calypso Twins — Tyreen and Troy — and their Children of the Vault cultists around the sector, stopping them from looting the Vault and causing general mayhem on every planet they touch. The story isn’t anything special, yet the appeal of finding new guns and seeing what they do in a pitched firefight, stomping around nigh-invulnerable in a powerful mech, and some well-designed side-quests do lift Borderlands 3 over the bland narrative.

In my review, I find a game that performs well on PC on the Epic Games store (where it’s an exclusive), with that still-looking-good art style. I just wish some of the yucks weren’t so … yucky.

Borderlands 3 is all about guns, and the moment-to-moment gameplay of runnin’-and-gunnin’ around a map, finding cover, climbing obstacles, and looting crates feels better than it has in previous games. Most of your weapons fire smoothly, and they’re responsive. You feel the difference between weapons with subpar and mediocre accuracy, and when you find one with an accuracy ranking befitting an Olympic shooter, you find the only thing that can stop you is rushing into combat without a plan or running out of ammo.

A number of weapons have alt-modes as well. A button-press gives your pistol a tracker, which tags a foe. You switch back to smart bullets and when you fire, your projectiles hone in on your foe, even around cover and corners. An SMG can go from shooting flame bullets to poison projectiles. A rocket launcher goes from one big “boom” to smaller missiles. These help you find weapons that fit your playstyle, adapt to your foes’ weaknesses, and save your inventory space (you don’t need to carry a weapon that does poison damage and another that does electric damage if one rifle does both).

I also found a submachine gun that spawned other SMGs on the battlefield. Each had a laser pointer and would stick to the ground or other surfaces, firing at my foes. I smirked at this. I didn’t noticed if it helped kill my foes, but it did help make me smile.

Above: “All I want is a gun that spawns other guns.” Borderlands 3 delivers.

The enemies feel smarter, too, plunging for cover on the regular and trying to flank you with assault units when possible. Maybe I’ve just forgotten this from Borderlands 2, but my foes feel more intelligent this time around.

A number of quests result in moments that made me smirk and smile. Two in particular stand out.

On Pandora, one quest takes you into a VR realm to save Vic, the top henchperson of one of your allies. Turns out that poor Vic’s head is in a jar. And she’s being tortured by the Children of the Vault (your main advisories) in VR, having her body re-created and cut apart time and time again. It sounds awful.

But by science I don’t understand, when you remove Vic from VR, her body rematerializes. So Vic is there talking to you, and so is her head in a jar. And they both start talking to each other. I enjoyed this.

As a journalist and a writer for more than 20 years, I appreciate the importance of coffee. My creed may as well be “Coffee is Life.” So I dig the side-quest for coffee on Promethea. You arrive as the Children of the Vault and their corporate allies are on the rampage, and the forces of another corporation are trying to stop them. Your ally here, Lorelei, tells you about her former life as a barista and how she would really be much better at managing the fight with some coffee.

Now, you end up with a series of fetching items, along with dealing with an annoying hipster barista bot. Nothing inspired there. But then the bot sends you after the enemy commander’s coffee mug, because of course your side has nothing that can hold hot liquid in it (despite, you know, being capable of interstellar travel).

And here comes the payoff. You end up facing the Coffee Commander, and when you get his mug, he’s none to happy about it. And he launches an attack against you and the coffee bar. It’s ridiculous, and I laughed at just how absurd it was that you’re facing the “Coffee Commander.” I loved it.

You find one or two of these fun side-quests on every planet. I enjoyed them more than the main story. I think you will, too.

Borderlands 3 isn’t an RPG about your narrative choices. Your decisions come from your build and your weapons. I played around with all the classes, and I found myself drawn to the Moze, the gunner who can spawn a mech. The armored suit reminds me of Overwatch’s D.Va. You can have three weapons to choose from for its two arms — I liked the grenade launcher and minigun, though the railgun has its charm. These weapons lead you down ability tress that boost your damage output, how much ammo you can carry, and more.

I took a liking to the grenade launcher. I found it helpful in taking on bosses and tanks, spawning little bombs at their feet as I laced them with minigun fire.

I’m a grumpy old man who doesn’t like playing shooters and RPGs with other people (unless I’m playing tabletop games). Shooter-looters such as Destiny should appeal to me, but they don’t because I don’t like playing online and dealing with the sprawling MMO-like world. I want to get in and shoot things.

You can play it co-op — but that’s not how I enjoy playing these games.

So in a market with Destiny, The Division, and Warframe, Borderlands 3 appeals to those who prefer playing on their own. You have a central hub (the spaceship Sanctuary), and you can buy and sell weapons here, participate in Moxie’s casino, and do other things. And when on Pandora or another planet, you can take a moment to just … stop. You don’t feel that push of the designers’ hand that comes with many MMOs, even shooter-looters.

The pace reminds me of Path of Exile in some regards — you have some encounters, get some time to recover and look over your loot, and the move on to the next set of foes. You can forge down the main quest or take on a bevy of side-quests. Path encourages solo play, and Borderlands 3 does as well, and I think a number of players will appreciate being able to go it alone at their own pace.

One of my favorite moments in Borderlands 3 was on Promethea during the Killavolt side-quest line. In one area, you’re looking for one of the battery packs you need to take down the sex-crazed game-show host. Your search takes you out to a dock that juts out like a peninsula, surrounded by an acidic bay. After you clear out the enemies here, you need to leap out over obstacles to get out to the battery. I appreciated that I could take my time doing this, as Borderlands 3 isn’t at its best when asking you to jump around.

A fan on Twitter asked me if you have time between encounters. You do! It’s up to you how much you want. If you’re like me, and you want to take a breather to appraise your newfound arsenal after picking up a half-dozen guns from a big encounter, you can do so. Or you can race on to the next one.

Farscape is one of my favorite pieces of TV sci-fi from the past 20 years. It had a cast of fun characters who felt like people, not just roles, and I enjoyed the story, acting, and puppet work on characters such as Rygel and Pilot from The Jim Henson Company.

And I think the narrative team at Gearbox digs it, too. You see Farscape‘s influence in Ellie, the beefy Southern bell who’s also a master mechanic. She’s flirts with you every chance she gets, and it reminds me of the minor Farscape character Furlo (played by Madga Szubanski, best known as Farmer Hogget’s wife in Babe), who’s also an engineer extraordinaire who flirts a bit with the series’ main character. I also found her not just helpful but outright adorable, someone who was always there to help you and Lilith take on the cultists. Stalwart allies are rare indeed.

And without a doubt, Claptrap channels Farscape‘s comic relief — Rygel, a diminutive alien desposed ruler with an giant personality — when his backend plugs a hole in your ship. Rygel’s derrière fills a similar role in a memorable episode.

Borderlands 3 has a comfortable rhythm: You appear, you start fighting Psychoes, Skags, and other fanatics; you acquire a death-dealing car; you find better guns and grenades. But at times, I got a feeling like I’d done this all before. It recalls the Star Trek: Voyager episode “Death Wish” from Season 2, in which a member of the Q Continuum wanted to commit suicide. This Q, Quinn, explains that you can only experience the universe so many times before it gets boring.

“I traveled the road many times, sat on the porch, played the games, been the dog, everything. I was even the scarecrow for a while.”

This is how I sometimes felt while playing Borderlands 3. Finding new guns and discovering their capabilities is enjoyable, but you can kill Pyschoes and Fanatics for only so long before it feels not just repetitive but a little boring. Sure, we go to new planets. But why is killing a Pyscho on Promeathea any different than killing one on Pandora?