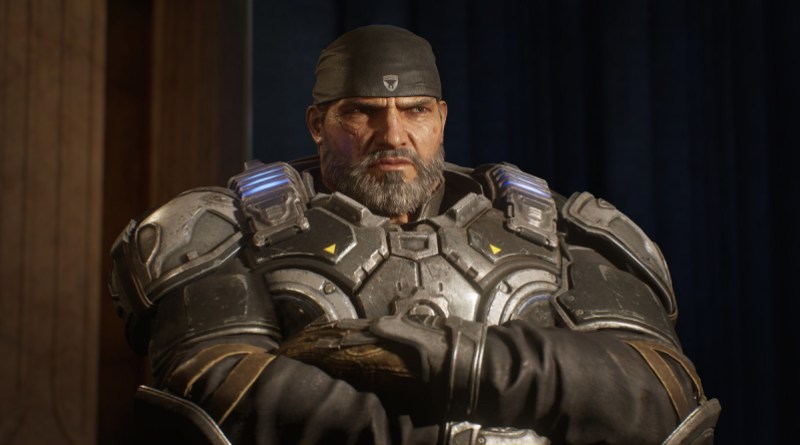 Above: Marcus Fenix is the star of the original Gears series, and he’s back in Gears 5.

GamesBeat: How did you think about bringing back these different characters like Baird and Paduk and Marcus? What roles did you want them to serve here?

Fergusson: We wanted to have the ties to the past. When we were talking about Gears 4, originally one of the random ideas was to take it to a different planet. What if we start Gears 4, since it’s a new thing, somewhere else and talk about a different planet instead of Sera? We didn’t do that because we felt we would lose our history. We’d lose the past and everything that came from the previous games.

That’s one of the things I like about having the old crew around, having Baird and Cole and Marcus around. They give us a tie to the past. It gives us an anchor to the previous trilogy without feeling like we’re doing the previous trilogy again. You get to carry all these lessons forward. The beloved characters get to make appearances and have an impact on the story. You’re not leaving them behind. But at the same time we’re also trying to carry forward new characters. You still want to be able to play as Kait, JD, and Del.

GamesBeat: I like that link to the past. But I also wonder, how many times can we destroy Sera?

Fergusson: Yeah, that’s a great question. War has officially returned. I think we’ll see how that’s going to play out. That was part of the thing in 4, when we introduced this idea that Sera herself, the planet itself, is fighting back and trying to rid itself of its inhabitants. The weather has turned terrible. There’s all these storms. We have to build wind walls around our communities to protect ourselves from the planet. There’s this idea of, if you mess with the planet enough, the planet’s going to fight back.

GamesBeat: I have this theory about Sera, that it’s hollow at the core. There’s no molten core. There’s plenty of room for swarms and Krakens and other things to live down there.

GamesBeat: I got through about 68 percent of the campaign. What does that mean I left unplayed? There are a few side missions I know I didn’t play, but what else might have been unplayed if you finish the campaign at that percentage?

Fergusson: There are some points of interest, some combat with more upgrade for Jack, some technology. You probably didn’t find all the relic weapons. One thing we’ve added to the game — much like in Gears one, there’s the Crimson Omen that shows where a COG tag is hidden. There are 18 or so weapons we’ve put in the world. They’re Easter egg weapons, special one-of-a-kind weapons, that we’ve hidden near a Crimson Omen to give you a hint. It changes the gameplay and makes it a lot of fun. Now you have a sniper rifle that has two shots in the clip instead of one. That kind of thing.

GamesBeat: Shakespeare plays are supposed to be five acts. I was kind of waiting for the fifth act to come up. You only had four.

Fergusson: Yeah, historically we’ve had five. Acts two and three are so ginormous. We looked at bookending that. Act one is almost a prologue, building you up going into the ice level and the sand level, these two large acts. Then when we got to the point where we said, “Okay, we have the Hammer of Dawn now” — it’s one of those things we always try to do in Gears. When you’re riding a horse back to the barn it picks up speed. That was the way we thought about act four. Okay, now we’re heading back to the barn. Let’s pick up some speed. It felt natural to end it there.

GamesBeat: We lost some main characters here, some big characters. How did you think about that, the way that worked in the story?

Fergusson: Our big thing for this game was challenging expectations through player choice. We’ve never had this kind of choice before in a Gears game, where you can affect who lives and who dies. We wanted to put it at a place where it made sense. If you do it too early, we’d have to almost make two different games. We wanted to make sure it was at a place where we could support the decision content-wise, but also we wanted to make sure that you spent enough time with both of them.

I’m really curious to see how all that plays out and what that means for the world going forward. We haven’t decided yet. But at least in the short term, we wanted to have that experience. Did you play BioShock Infinite?

Fergusson: Do you remember the lottery scene, where you have the baseball and you decide whether to throw it at the couple or throw it at the guy? That kind of decision — that was one of the things that resonated with me. Giving the player a hard choice and having them decide how to deal with a situation. What does this mean? I liked that idea. That was part of the inspiration behind this choice. Let’s give the player an impossible choice and see what they do with it.

GamesBeat: It made the game more serious. I always think of Gears as a combination of the wackiness in some of the combat, and then the serious tone of the story. It’s a losing battle. How do you think about that contrast? How serious to make it versus how crazy?

Fergusson: We always oscillate across all that. It’s one thing I love about the franchise. If you look at the spectrum, you can go all the way from over-the-top comically funny to summer blockbuster action movie to emotional moments that make you cry, like the Dom scene or the Maria scene. I love having a franchise where you have permission to go anywhere with it. You can almost take it anywhere. You’re not locked in.

We wanted this to be about war. We wanted this to be about loss. We wanted to make sure that along the way, you lost people. That was part of it. We felt like this was the time to shake things up and make people, like I said, feel that loss. We wanted you to hate the queen out of the gate. We wanted to make you understand that she’s not Kait’s mom. We didn’t want you to think you could save her. We didn’t want it to be, “My mom’s inside. We can save her. We have to help her, not fight her.” By having the queen kill a beloved character, now you hate her. You want to fight her. That was something we wanted to underline right away. It’s not Reyna. It’s the queen. You need to kill it.

GamesBeat: It feels like Gears is aging, and some of your players are too. Maybe they appreciate some more serious storytelling. I don’t know if that matters as well, that there’s this older generation of Gears players now. Maybe they’re more into the storytelling side.

Fergusson: Yeah, I agree. I just don’t want to lose all the humor. I feel like being in a post-apocalyptic world where it’s all grim — if all the way through Gears 4, Kait just said, “But my mom, but my mom, we gotta save my mom,” in a single tone — in an oppressive world you can end up there if you let yourself. Having that gallows humor, having some moments of levity, that kind of thing helps. You want to have a peak and valley kind of experience. Having a joke in one scene gives you permission to have a really serious moment somewhere else. The contrast makes it more impactful.

GamesBeat: You’ve got more humor than The Last of Us. That’s a good thing.