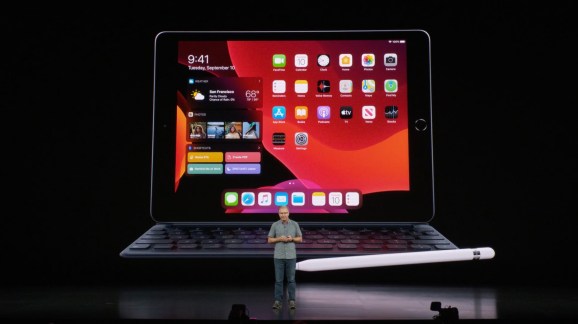 Roughly a year and a half after introducing the sixth-generation iPad — an entry-level model virtually identical to its predecessor, but with Apple Pencil support and a faster processor — Apple today revealed a redesigned seventh-generation model with a larger screen. For the first time since Apple introduced the iPad in 2010, the base model is jumping from a 9.7-inch display to 10.2 inches, a half-inch difference that narrows the gap with the iPad Air introduced in March.

At this point, Apple has split the iPad lineup into enough models that they’re hard to keep straight. This is the sequel to the $329 entry-level “iPad” focused on educational users, first-timers, and other customers who aren’t looking for tremendous horsepower. A model called the iPad mini has a smaller 7.9-inch screen but a higher $399 price tag and A12 Bionic processor, while another model called the iPad Air has a larger 10.5-inch screen and even higher $499 price tag. Then there are two iPad Pros with 11- and 12.9-inch screens, four speakers, and Face ID cameras for $799 and $999.

Beyond increasing in size and going up to three million pixels (2160 by 1620) in resolution, the new screen features brightness (500 nits) and wider viewing angle improvements relative to the prior model’s. And as is typical of Apple updates, the 2019 iPad isn’t just getting an improved screen; internal improvements are also included. Most notably, it includes support for Smart Connector accessories for the first time, enabling “Smart Keyboards” to connect and get power without Bluetooth or Lightning.

Once again, three colors are available — space gray, silver, and a very pink rose gold — with 32GB and 128GB capacities. Gigabit LTE is now supported in cellular models, while every version has 802.11ac (Wi-Fi 5) with Bluetooth 4.2 wireless connectivity, notably steps behind the latest standards. Cameras remain at 8-megapixels on the back and 1.2-megapixels on the front.

Surprisingly, the entry-level iPad continues to have an A10 Fusion processor — just like the last model — rather than stepping up to a newer A11, A12, or A13. The new model continues to have a Home button and use a Lightning connector rather than USB-C. It’s available for order today in non-cellular versions starting at $329 (32GB) or $429 (128GB), with cellular models at $130 upgrades, all hitting stores on September 30. Students and educators can continue to take advantage of $299 entry-level pricing, a promotion that’s been available for prior iPad generations.