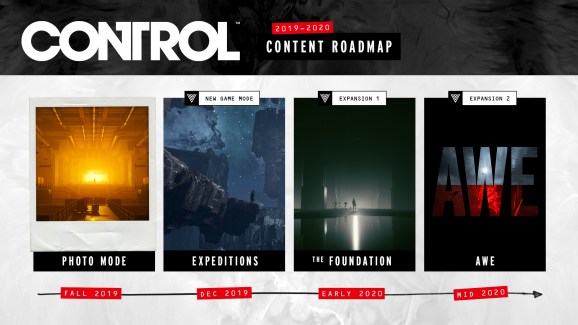 Control is one of the best games of the year. It’s an excellent action-adventure with Metroidvania-like exploration from Alan Wake developer Remedy. And now the studio has revealed its content roadmap for Control today, which has plans for updates through the middle of 2020. The studio is even teasing a potential crossover between Control and Alan Wake.

In its roadmap, Remedy highlights four major update points. This fall, Control is getting a photo mode. In December, the studio is adding a game mode called Expeditions. Then starting in early 2020, Remedy is going to begin releasing expansions. That starts with The Foundation in the early part of next year. Expansion 2, called AWE, follows that in mid-2020.

This is a free update specifically for players who have reached the end of Control. It has hero Jesse teaming up with security chief Arish to explore something called the Formation.

“Here you will face the some the greatest challenges that the Oldest House can throw at you,” reads Remedy’s blog. “You will need the best gear and abilities to survive.”

Remedy is planning to sell both expansions, so it is positioning them as meaty add-ons to the core experience. Both are going to have Jesse uncovering more of the mysteries of Control’s Oldest House setting.

“The Foundation will delve into the history of the Oldest House,” reads Remedy’s blog. “At the request of the ever-mysterious Board, Jesse must explore what lies beneath the Bureau as she returns order to the Foundation and the Oldest House itself. Expect things to get weird.”

Control and Alan Wake are in the same universe?

But it’s the second expansion that Remedy fans might find especially interesting. It’s called “AWE,” which stands for Altered World Experiences. But that is a term that potentially ties Control to Remedy’s previous games, Alan Wake and Quantum Break. Both of those games involved AWEs, and you can even find an explicit references to them in Control’s many collectible pieces of intel.

And Remedy is making it sound like AWE is going to enable Jesse to look into the events of those other games.

“The second expansion, AWE, will take Jesse into a new part of the Oldest House, the Investigations Sector, where the Bureau closely examines Altered World Events,” reads the blog.

The AWE artwork even uses the Alan Wake cover if you have any doubts about the connection.

Above: The Alan Wake Experience is the best prog rock band of all time.

You can see Alan Wake holding his flashlight among some coniferous trees in the top half of the AWE logo. So yeah, we are probably getting a crossover.