Tabletop board games have made a big comeback, but they are still a bit of a hassle to deal with when it comes moving around little cardboard pieces. If you’ve ever wondered why these games haven’t gone digital, then you may be interested in the Gameboard-1 from The Last Gameboard.

The Gameboard-1 is like a flat computer with a square display, 16 inches-by-16 inches. It is thin, light, and portable, and you can expand it by connecting it to other Gameboard-1s. You can also connect a private screen, like your smartphone, to it so you can play a game like poker, where you want to hide the cards from other players.

It’s a novel idea that comes from an unlikely pair of founders, Shail Mehta and Rob Wyatt, who created The Last Gameboard company in January.

“This is such a huge passion project for me. In the beginning, it was about understanding the barriers of why people are frustrated with hobby games today. We’re not looking to replace them,” Mehta said in an interview with GamesBeat. “We’re just looking to enhance it. It is giving you a different way to experience gaming, a different way to be interactive. We want it to be social, to use physical pieces, and to use all of the advancements of technology that we have available to us.”

The Boulder, Colorado-based company will launch a Kickstarter crowdfunding campaign on October 10. The Last Gameboard is targeting a cost of $350 for the Gameboard-1.

How it all started 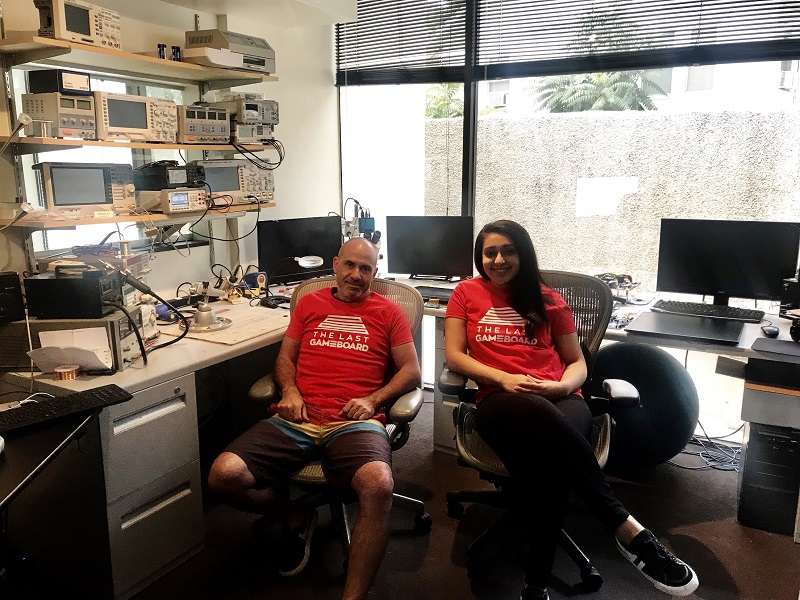 Above: Rob Wyatt and Shail Mehta of The Last Gameboard.

After she immigrated to the U.S., Mehta learned English in part by playing board games like Chutes & Ladders.

“I’ve been playing for games my whole life. I immigrated to the U.S. from India in the ’90s. I have this vivid memory of going out into the neighborhood, and I didn’t speak the language or anything like that. And the kids were playing Chutes & Ladders. And I sat down, and I just started playing with them.”

She added, “That’s how I started playing for games and I made friends and I learned English. And it just stuck with me ever since. Like, I love playing board games. I love playing like RPG games.”

She grew up, worked for hedge funds and venture capital funds, and consulted for various government and enterprise projects. In 2018, she got the idea to build a device that would address her problems as she played the games she loved.

“I had this idea for merging physical, digital and kind of using ways to enhance connections with each other,” she said. “The reason why people love hobby games is they bring people together. And that’s what we wanted to build.”

She lived in the Boulder area and heard about a hardware guru, Rob Wyatt, who moved from the United Kingdom to the U.S. nearly two decades ago. I met him years ago as a member of the original Xbox hardware team, and I wrote about him in my book, Opening the Xbox. He is now an avid skydiver and loves creating new technologies associated with gaming. He has worked on game projects for Microsoft, Sony, Atari, and most recently, Magic Leap.

Wyatt and Mehta discussed the challenge of touchscreen devices over a beer. Why couldn’t any digital device recognize physical objects for varying shapes and sizes, especially the types of objects that are needed for hobby gaming?

“She was telling me about this, and I said I think I can help you with that,” Wyatt said in an interview. “I started looking at like the core problems of like, ‘What are you trying to solve?'”

They also saw that today’s technology is seen as promoting isolation trends in our population. Video games are being blamed for depression, ADHD and many other ailments that plague our society. In order to break these trends, a gaming device should be built to enhance the human connection, they felt. Games should bring people face to face. That was how they came up with the inspiration for Gameboard-1. They started their company in 2019.

“The most difficult part for us to do was to figure out how the technology works so that it’s something we can patent and delivers a seamless user experience,” Mehta said. “I couldn’t have done that without Rob.”

A platform for tabletop gaming 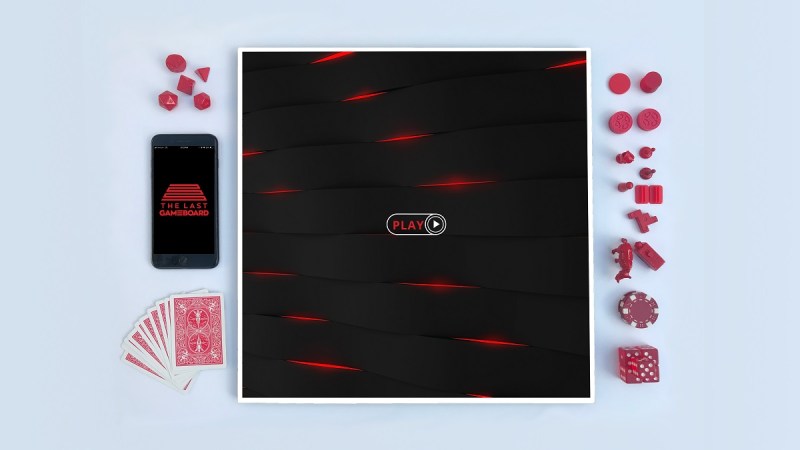 Above: The Gameboard-1 can replace old board games.

The platform enables the game player to purchase and download a game or subscribe to a game for enhanced online interactive play (like an Amazon Kindle for hobby gaming).

“I think our biggest value proposition is our platform. And it’s the games that will bring on to this and the community that we create behind it, because that’s the fundamental truth of hobby gaming,” Mehta said. “We’ve got a really good grasp on it now.”

The gameboard itself comes with standard tags, which can be attached to any existing game piece or order game-specific pieces via in-app purchases or from The Last Gameboard’s own online store. Players can subscribe or just buy a single game.

The Last Gameboard platform consists of a native applications programming interface (API) as well as Unity and Unreal game engine plug-ins for game developers to port their existing games onto the Gameboard-1.

“We decided to make a perfectly square screen, or almost the size of a normal game board,” Wyatt said. “We could have made it 20 inches-by-20 inches, which is kind of a Monopoly board size, but it was too big, like carrying a monitor around with you. It turns out 16 inches is just big enough for people to sit on each side and not too huge.”

Wyatt tried to keep the design simple, but sophisticated enough to enable players to put pieces on the board that would be recognized by the screen.

He added, “The square is the key. You don’t waste a lot of real estate. The board has Qualcomm off-the-shelf hardware and transparent antennae that can be embedded in the touchscreen. It can detect objects that are placed on top of it or on the sides. We know what the piece is and where it is on the board and which way it is facing. It’s a really cool system.”

You can download games via an online connection, but you don’t have to be connected to play. When players aren’t online, they can use the board as they would use a traditional cardboard board game. Any games you have installed you can play completely offline with multiple local players.

Gameboard-1 is expected to ship n the fourth quarter of 2020. Wyatt and Mehta have been out talking to tabletop game developers, and they have about 100 games committed to the platform. 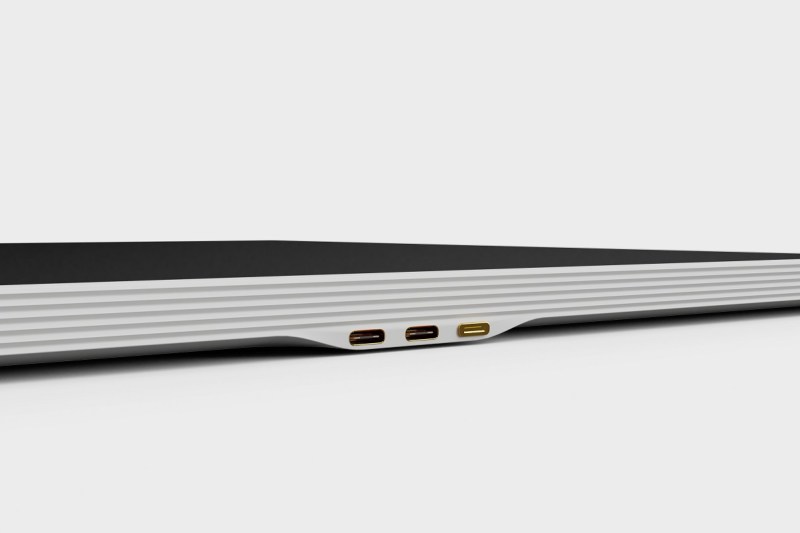 Above: Gameboard-1 is a skinny thing.

And it isn’t restricted to board games. Developers can make any game or content they want from pure digital board games to games that interact with physical pieces, cards, and dice.

For example, you could make arcade-style games like air hockey or even a toddler game like a digital shape sorter with large-sized, brightly colored, physical pieces.

Most of the game pieces are actually passive and require no batteries. The Gameboard-1 can detect the location, orientation and type of piece when they are placed on the board. The pieces themselves store about 2K of encrypted data. Some of this is read-only and contains vendor and product info but a lot of the storage can be used for user data.

This opens up a whole new category of play because, for example, a wizard character piece could build experience (XP) and store it in the piece. Therefore, the capability of a given piece can change over time. You can take your pieces to a friends house and keep your XP without anything being stored in the cloud.

Active pieces contain a battery and electronics. These pieces have two-way communication with the game board and could have buttons for additional user input or incorporate any number of other sensors, even communication with your private screen.

For example you could cast a spell from a private screen, the active wizard piece would glow and pulse and the light show could transition to the pixels on the screen as the spell radiates out, Wyatt said.

Active pieces enhance what is possible in terms of interacting with users or even the environment. All of these new mechanics allow the Gameboard-1 to enable game play and game styles far beyond what’s possible with a traditional digital game board.

The Last Gameboard will provide generic bases which act as passive pieces and users can 3D print their own pieces to sit on the base allowing prototype games to interact with physical pieces. These generic bases, after being configured, can also be used for users who want to use existing game pieces – maybe they have an expensive chess set they want to use with the game board.

“The technology has all come together so you can do this kind of thing now,” Wyatt said. “And when we get this into the hands of game developers, they will do things with it that we didn’t think about.”

How do dice work? 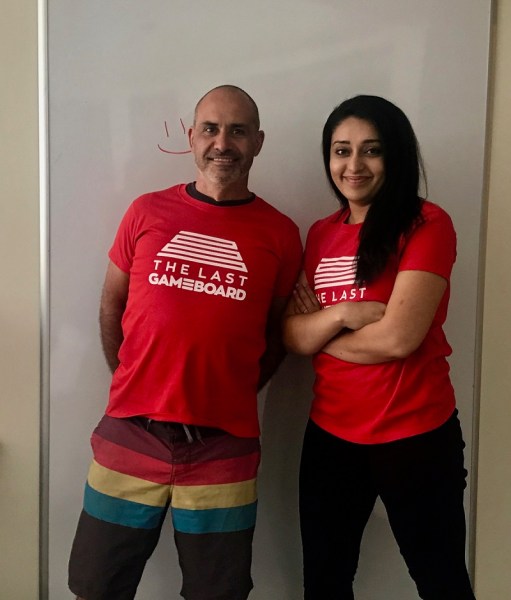 Above: Rob Wyatt and Shail Mehta.

Some tabletop gamers are passionate about wanting to throw their own real dice, as it’s social and it signals that it’s your turn. But others see the dice as no more than a way to randomize the game. This group would be more than happy to only use digital dice. In order to accommodate both camps, any game that uses dice needs to have a digital version of that dice but physical dice are supported for the players who want to use them.

In order to support physical dice, the company developed a machine vision system that will allow any dice. There needs to be nothing special about the dice; they don’t have to be registered; they can be made of any material, any color, any number of sides and we can read multiple dice at once.

Custom games can have custom dice and the developer can provide template data to the vision system to explain how to decode the sides. The company is also working with partners who are making Bluetooth dice and we fully support them. In total there are four ways of supporting dice: digital dice on the game board, dice from a private screen, physical dice with machine vision, and Bluetooth dice.

There are rivals out there. I wrote about Blok.Party’s Playtable in March 2018. But that game machine hasn’t shipped yet, and the original CEO Jimmy Chen said he was no longer at the company. John Dempsey, the new CEO, told me earlier in May that the company was seeking more money and was figuring out when to ship. But that project is far behind its original schedule.

Although the company is making game hardware, it is not in the console business. A handful of people are working on it now.

“If you play the same game with Sony and Microsoft, you will lose,” Wyatt said.

The Last Gameboard expects to raise a round of funding, and it will run a campaign on Kickstarter to gauge demand.

“We’re doing the Kickstarter for market validation, not for money,” Wyatt said.