HTC is launching a new high-end consumer virtual reality headset, the HTC Vive Cosmos, and it will ship on October 3 for $700. Preorders are open today.

The new VR headset is going to feel like a new generation of VR, perhaps the second or third since the first modern VR headsets launched in 2016. While the price is high, it’s still less than the $800 price that the original HTC Vive debuted at in 2016.

Vive Cosmos is HTC’s premium PC-based VR system created with a focus on making virtual reality more accessible, easier to use, and higher quality. It is a wired headset with better resolution, and so it is moving in the opposite direction of low-cost, wireless headsets like the HTC Vive Focus and Facebook’s rival Oculus Quest.

The headset can change over time through a modular faceplate design that can add functionality, such as the newly announced Vive Cosmos External Tracking Mod. That mod uses the external laser-based sensors that shipped with the original HTC Vive. Normally, the Vive Cosmos uses inside-out tracking, with sensor cameras on the headset itself, rather than the external tracking. But the mod is available for those who believe that the tracking via the six cameras on the headset is not accurate enough.

“We wanted to address it with our hardware technology and what we could do there, giving a simpler, easier product to set up and use; a better and easier software experience with the Vive Reality system, an experience of being able to move between worlds; and a third area around a robust content offering,” said Daniel O’Brien, the general manager of the Americas at HTC Vive, in an interview with GamesBeat. “It will work with your entire Steam library. It will work with your Viveport library, as well as Viveport Infinity” subscription offering. 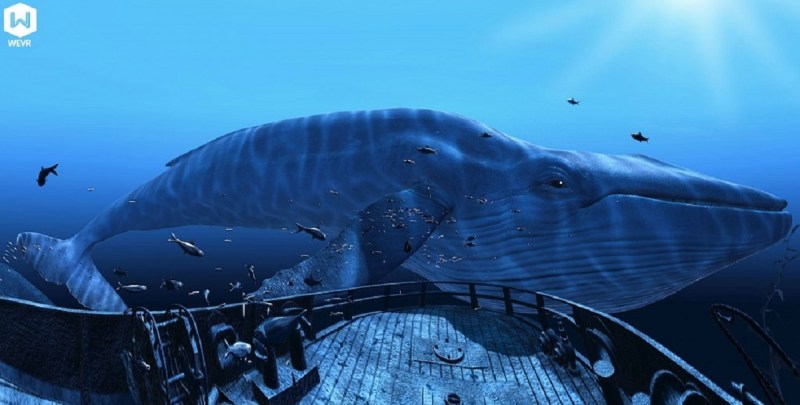 I tried it out at HTC’s office in San Francisco. The headset felt quite light on my head, compared to the original HTC Vive.

The controllers resembled those for the Oculus Quest controllers, which also have a circular band around your hand for sensor tracking. And that’s a good thing, as we are pretty much approaching a universal standard for such controllers now. These controllers use cameras on the headset to detect where your hands are. This lets you get rid of external sensors, if you really want to, and the hassles that go with them.

When I started, I went right into the imagery of the Vive Reality System, a kind of lobby where you can wander around in a lovely virtual space. You can move around by teleporting, which is less likely to get you seasick. You can navigate through your VR library and store through a portal. It’s a more pleasant and accessible onboarding experience. You can see some of what I saw in the embedded video.

I was able to compare the visuals of the new headset to the old one, using Wevr’s TheBlu undersea VR experience. I remembered the old version of TheBlu looked beautiful, but it had a lot of the “screen-door effect,” or the VR visual flaw that makes it seem like you are looking through a screen door. I had to squint hard at the whale’s eye to notice. The new Vive Cosmos had barely perceptible screen-door effects. And visually, it looks much better. With this version of VR, we are getting much closer to what VR should look like.

The sounds were also very immersive, as the ear speakers are adjustable and do a pretty good job of driving the sound directly into your ear. 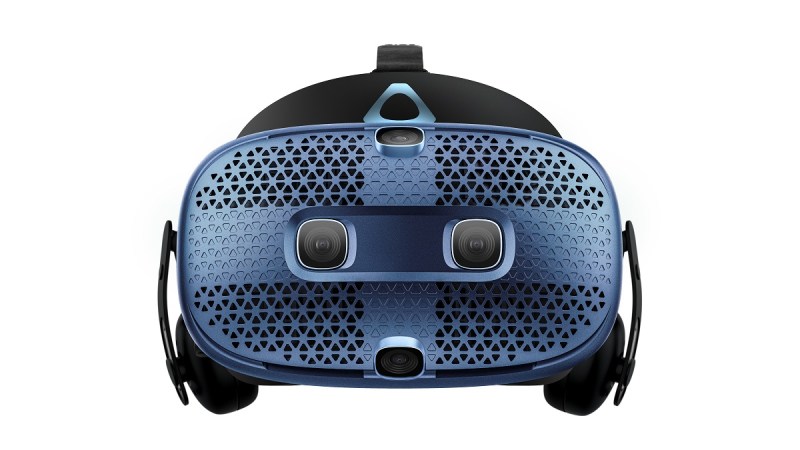 Vive Cosmos was built to adapt to the needs of VR customers with ease, versatility, and performance at the forefront. The all-new Vive tracking system offers a simplified setup that makes getting into VR faster and easier than ever before, with six camera sensors for wide and accurate inside-out tracking. That enables 310-degree tracking.

Cosmos features a 1,440-by-1,700 pixels per eye (2,880-by-1,700 combined pixel resolution). That is an 88% increase over the original Vive—delivering crystal-clear text and graphics. All-new dual LCD panels reduce the distance between pixels. Combined with real RGB displays, they also minimize the screen-door effect. A unique flip-up design allows users to jump between reality and virtual reality in seconds — all without disrupting VR journeys. The refresh rate is 90 hertz, and the field of view is 110 degrees.

“We changed up not only the resolution and the fidelity going to an LCD screen that’s full RGB,” said O’Brien. “Now it’s three subpixels for every pixel. It’s a clearer, higher visual experience. We also changed out the halo design for better weight distribution. You can flip it up to go from your virtual world to your real world very easily. That’s customizable.” 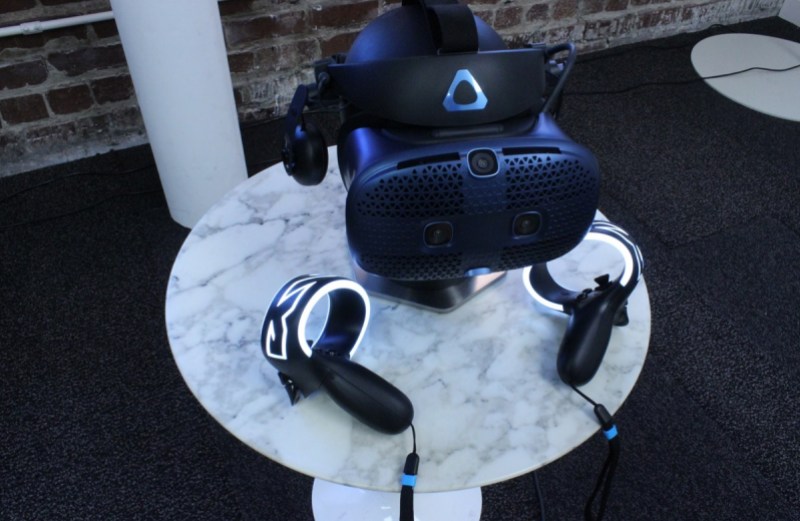 It has built-in stereo headphones that you can replace if you want. It has USB 3.0 and DisplayPort 1.2 connectivity, with USB-C 3.0 peripheral ports for a proprietary connection to mods. There are no minimum space requirements for standing or seated VR. Room-scale VR requires a space of two meters by 1.5 meters.

The headset has improved ergonomics and comfort to allow for longer VR experiences and integrated on-ear headphones which provide immersive sound. Cosmos also features completely redesigned controllers that maximize functionality within VR and offer extended comfort during long play sessions. Those controllers felt quite comfy in my hands, and they weren’t as bulky as the previous ones.

“We’ve added quite a few controls to this. We think the industry is converging on a de facto standard. We added the X, Y, A, and B buttons. Then we went from the trackpad for your thumb to the joystick. We had a lot of requests for that, particularly from gamers,” O’Brien said. “The gamers also wanted analog feedback from a joystick.”

Cosmos is also compatible with the Vive Wireless Adapter for those who want to enjoy moving in VR without being tethered. The headset does not have native eye tracking, as the more expensive HTC Vive Pro Eye ($1,600) for enterprise has.

With a modular faceplate design, Vive Cosmos is the most versatile premium VR headset yet, designed with upcoming accessories to change the functionality of the headset and offer customers the ability for their headset to grow with them over time. The first official mod, announced today, is the Vive Cosmos External Tracking Mod for customers that want to continue to use their existing Lighthouse base stations for tracking scenarios, but also take advantage of the superior performance of Vive Cosmos.

This first base station-compatible mod supports Vive’s ecosystem of peripherals including the Vive Tracker, delivering unprecedented input freedom for VR controls. This new mod will be available in the first quarter of next year. 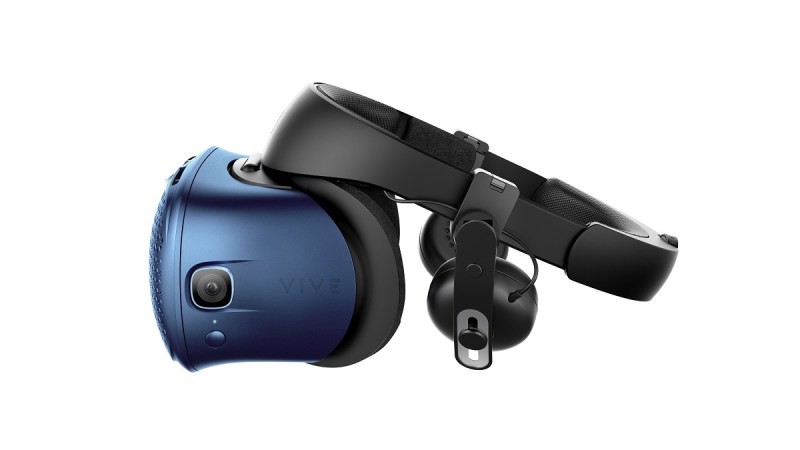 Viveport Infinity gives unlimited access to hundreds of top-rated VR apps, games, and videos like A Fisherman’s Tale, Fujii, and Ninja Legends, as well as premium videos from top brands like GoPro, Discovery Channel, and Animal Planet. In tandem with the Vive Cosmos launch, Viveport Infinity will be adding new titles such as Doctor Who: The Edge of Time by Maze Theory, Playstack, and BBC; Eleven Eleven by Syfy; Battlewake by Survios; Gloomy Eyes by Atlas V and 3dar; and Swords of Gargantua by Yomuneco and gumi; and MLB Home Run Derby VR by MLB. 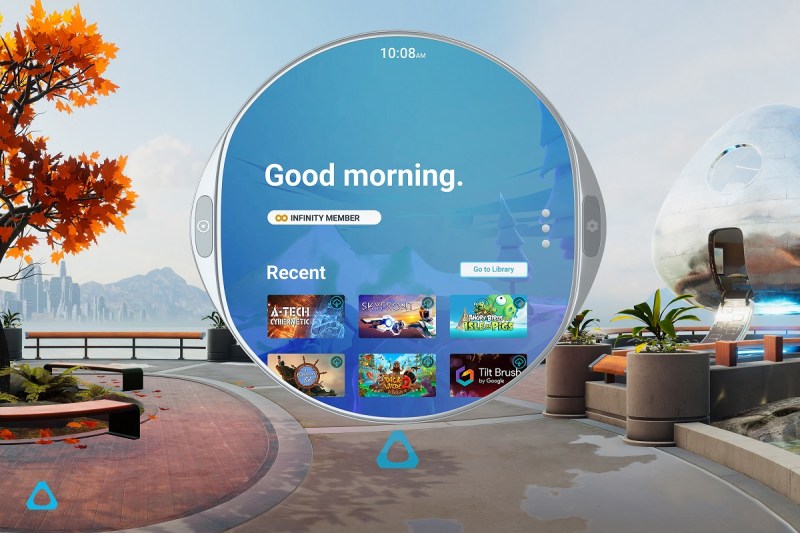 Cosmos offers an out-of-box experience that is easy to set-up and launch into virtual worlds using the new Vive Reality System. Vive Cosmos is the first headset to offer the Vive Reality System, a reimagined core software experience for Vive. The Vive Reality System is a new design philosophy for VR, offering an extension of life to make VR feel less like launching apps and more like stepping between worlds. Cosmos will feature a redesigned user interface called Lens to easily navigate XR and Viveport Infinity applications, and a new, dynamic home space called Origin. The Origin space is the launchpad for VR applications and interactive experiences that will grow over time.

Setting up a space to play takes a minute or so. You can wear the headset and see the play space around you because the cameras have “pass through” capability, where you can see the outside world through the cameras, even if you have the headset on. That lets you draw your own boundaries to make sure you don’t hit your furniture.”

Vive Cosmos will be available for preorder online from HTC at Vive’s website well as through Amazon, Best Buy Canada, B&H Photo, GameStop, Newegg, and Walmart. The current Vive CE unit is going to be retired.

I think HTC has done a very good job of delivering both a next-generation VR experience with the better visuals, the standardized controllers, and a lower cost. If anything, this tells us the state of the art of engineering for consumer VR headsets. It tells us that it’s still better to use a wire to connect a PC, which does the processing, to a headset. Standalone wireless headsets like the $800 Vive Focus Plus and the $400 Oculus Quest are a nice dream, but they don’t push the edge of what is possible in graphics. The HTC Vive Cosmos pushes that edge in graphics, and it is more accessible thanks to inside-out tracking, but it still requires a good PC. And that limits its portability.

While this is an engineering marvel, I still have to wonder about the overall health of the consumer VR market. VR is still struggling, as there are tradeoffs to be made on costs, visual quality, and mobility. This product makes some headway on all three fronts, but it is still way too pricey for general consumers. I think it is another stepping stone in the advancement of VR, but it is not going to bring about the VR nirvana that some of the pioneers have been hoping for. Patience is still important in the long VR road.