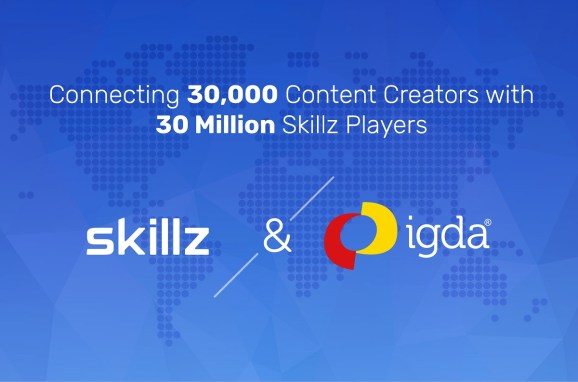 Skillz and the IGDA are teaming up.

The San Francisco-based Skillz makes it possible to play esports matches in mobile games, and it has built up an audience of 30 million registered players. On top of that, Skillz enables developers to create new mobile esports games, and it has built that network up to 20,000 players. The IGDA, meanwhile, has a network of 10,000 chapters of game developer groups. And now they will be connected.

“Game makers are the unsung heroes of esports, designing the engaging content that drives a growing multi-billion dollar industry forward,” said Andrew Paradise, the CEO and founder of Skillz, in a statement. “Skillz is the platform that empowers anyone to embrace their inner champion. By giving some of the most talented creators in the world access to the Skillz community and technology platform, the industry’s brightest rising stars can showcase their passions to the world’s 2.6 billion mobile gamers.”

Gaming is becoming the most important mass media market and already employs over 220,000 professionals spanning programmers, producers, artists, writers, analysts, and more. The mobile gaming industry is now 50% larger than the global film box office, bolstered by the 60% of people with smartphones who play at least one mobile game. In the past decade alone, the number of game makers worldwide increased from 32,000 to over 10 million.

“Partnering with Skillz is an incredible opportunity to enable developers from all walks of life and in studios of all sizes to make their mark on the booming esports scene,” said Renee Gittins, the executive director at the IGDA, in a statement. “It’s more important than ever to support the thousands of creators working alone or in smaller studios, given the increasing accessibility of game development and resulting competition. We’re working with Skillz to give developers the tools and connections they need to make their games successful.”

The IGDA founded the world’s largest game creation event, the annual Global Game Jam (GGJ), now run by a separate organization. In GGJ 2019, more than 47,000 participants at 860 sites in 113 countries created over 9,000 games in one weekend. Through Sept. 30, developers have another opportunity to create great games and win a grand prize valued at $50,000 through the Skillz Global Game Developer Challenge.