Two Bit Circus is doubling down on its social gaming community with the addition of new events and esports gatherings for its fall season.

The entertainment venue opened as a “micro-amusement park” and a kind of modern virtual reality arcade last year in downtown Los Angeles. Brent Bushnell, CEO of Two Bit Circus, is the son Atari cofounder Nolan Bushnell. Bushnell and his co-creators built the place as an ode to the circus of years past, only with modern games. And now they’re adding both electronic and non-electronic programming to the mix.

The park already has a collection of over 54 indie, one-of-a-kind, and classic arcade games. The company houses a variety of entertainment experiences in its 38,000-square-feet park. It is also hosting an Anti-Gala on October 14 to celebrate one year of being open to the public.

The lineup includes a new “story room” dubbed Dr. Botcher’s Minute Med School. A group of up to six guests goes into the room for about 20 minutes at a time and learn to do simulated surgery. The guests poke, prod, and zap their way through med school.

“This is my absolute new favorite thing in the park, which is our newest story room,” said Eric Gradman, cofounder of Two Bit Circus, in an interview with GamesBeat. “People who are not playing are welcome to look through the window and see what people inside are doing. And what they see from the outside when they look in the window is a group of up to six people learning to become doctors. There’s an orange puppet body in the middle of the room. There’s a fully stocked pharmacy and people put drugs into the patient. They’re poking and prodding. It is absolutely ridiculous.”

Clash of the Carnies 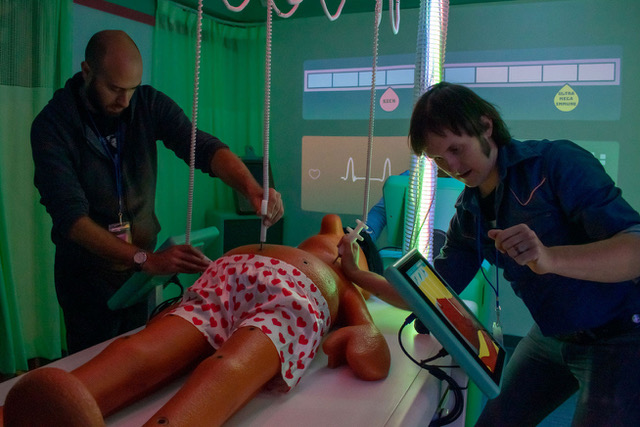 Above: Dr. Botcher is a new Story Room at Two Bit Circus.

In this event, teams of four people will participate in a combination of gameplay including 4-player, single-player, VR, arcade games, and everything in between. Monthly events will be themed, with costumes available from a giant treasure chest of identities to choose from.

The first Clash of the Carnies will be held on Thursday, Sept. 19 from 7:30 p.m. to 9:30 p.m. Pacific and will continue on a monthly basis, leading up to a Grand Finale event in December. All games are played in a round-robin style.

“It’s not super serious. People are not waiting their turn to play,” Gradman said. They’re not getting up in front of a bunch of people. It’s not a performative thing, unless you wear a costume, in which case, you’re in the right place.” 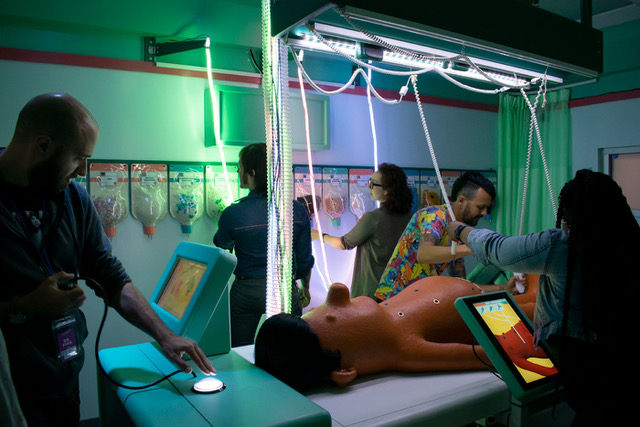 Above: Dr. Botcher in action

Two Bit Circus is expanding the program to include analog experiences. Harkening back to the days of sitting around with close friends, throwing dice, and moving pieces, board game night invites everyone to participate.

With a variety of never-before-seen (or played) table games from both established and upcoming game developers, these events serve as an extension of the Park as a Platform program. Guests play beta games for free, while developers are able to test ideas and get real feedback, helping them to progress through development.

The first board game night takes place on September 25 from 6 p.m. to 10:30 p.m., with both Cards Against Humanity and Exploding Kittens debuting new games.

“This is going to be a weird board game night,” Gradman said. “You know, we’re not playing the classics here. One thing that our position in the community lets us do is it gives us access to games from the big players that no one else gets to play. Cards Against Humanity and Exploding Kittens are both debuting new games at the park.”

Two Bit Circus’ new family programming aims to inspire the next generation of inventors. The team will create family-oriented Cardboard Challenges, competitions, new shows in the theater Club01, and a Weekend package bundling it all. A new 45-minute game show utilizes the interactive tech of Club01.

“We’ll start to step up our offering for families on the weekend,” Gradman said. 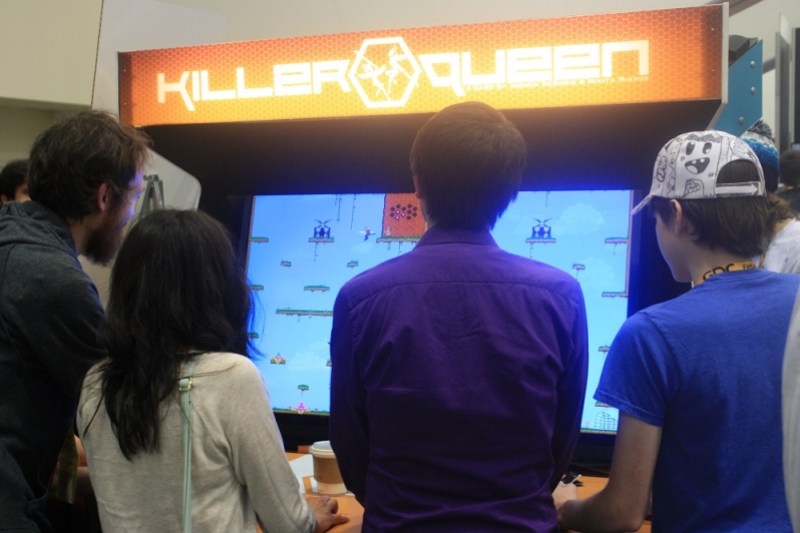 Above: Hectic multiplayer sessions of the Excellence in Design nominated fighter Killer Queen were common throughout GDC week.

Two Bit Circus is teaming up with new partners to bring a fresh variety of tournaments for gamers of all skill levels. In the past, tournaments have included popular titles such as Super Smash Bros. Unlimited and Fortnite as well as some uniquely tailored experiences like Ping, World of Tanks, Killer Queen, and more.

The next tournament is on September 26, from 6 p.m. to 10:30 p.m. featuring Mario Kart, with two more happening later this fall.

“This is not stadium-style sports,” Gradman said. “People sign up in advance, they show up, they’re really into it. You take total amateurs who are really excited to play and give them a low-stress place to play in public.” 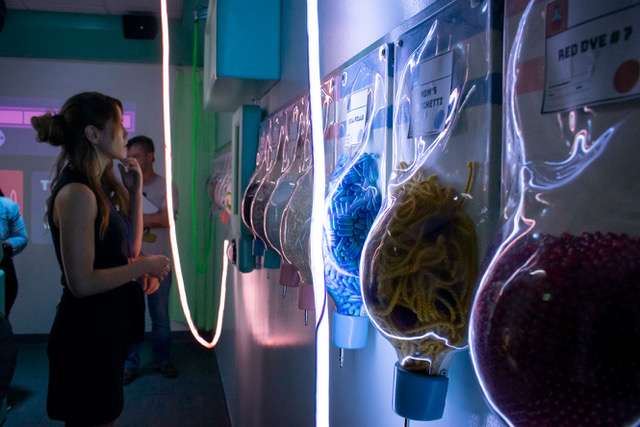 Above: Dr. Botcher is a quick med school lesson.

Beta nights is returning for another season. This evening entertainment allows a variety of outside developers to test and unveil the latest projects they’ve been working on, which guests can test out for free — provided they’re willing to offer feedback in return.

As an initial force of the company’s Park as a Platform program, these nights provide developers with valuable feedback that helps progress games through development, supplementing Two Bit Circus’ goal of fostering innovative approaches to play and encouraging a constant influx of fresh, diverse content.

“One of the true marvels of this place is how it’s able to create what I call these micro friendships,” Gradman said. “Just like getting people who just don’t know each other and who would have otherwise no opportunity to spend time together.”