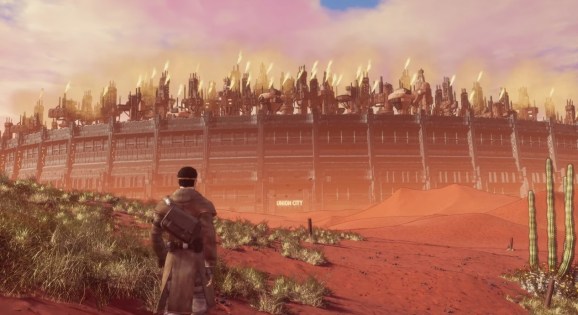 Apple Arcade's Beyond a Steel Sky.

Indie game developers are hungry. Long denied a fair seat at the table by tech giants that own the few mass distribution channels, many indies are looking for better ways to break into the market. The upcoming launch of Apple Arcade is bringing new light to this issue, prompting developers to reexamine their position in both the subscription marketplace and the broader Apple and Google ecosystems.

It’s no secret that game developers have long been wary of riding the Apple bandwagon. While the App Store’s closed system model is hugely beneficial for Apple, ensuring the company gets a cut of any app sold within its ecosystem and providing continuity for users, it doesn’t work well for developers. And it’s particularly problematic for the video game community — revenue potential is limited, consumers struggle to find out-of-the-box games, many indie titles are buried in a sea of choices and practical alternative distribution options are minimal or non-existent.

Many developers are reluctant to trust Apple due to the company’s strict and ambiguous content policy. Games and apps are censored differently than other media on Apple’s platforms, and many are removed or rejected for what some consider unfounded reasons, leaving developers questioning how to consistently meet the censorship guidelines. Race-to-the-bottom pricing is another major concern with the current app store model.

To bring this into focus, consider that while the mobile games industry is generating over $70 billion in annual revenue, mobile developers are setting aside anywhere from three to 10 times their development budget — about $100 billion by my count — for user acquisition. This excessive spending on user acquisition is driving more and more users to the app stores, proliferating the issues.

At first blush, it appears that Apple Arcade, which launches September 19th (and Google’s recent test launch of its competitive service Play Pass), will perpetuate the “walled garden” status quo. This raises a few key considerations for developers. First is the share of attention that Apple Arcade will give to indies. Apple says it will curate a wide range of games, change the library of titles regularly and include games from indie developers. Yet, the model doesn’t appear to include solutions for the larger systematic problems of poor discoverability and revenue sharing that so many developers struggle with in the app stores.

Further, it’s unclear how the subscription model will gain meaningful traction with Mac or iOS players. History doesn’t paint a favorable picture for subscription models for games. But in the last five years, consumer interest in subscription models has risen, including among gamers. eMarketer reports that 34 percent of Americans say they expect to increase the number of subscription services they use over the next two years. The average number subscription services Americans keep is also up—increasing from 2.4 to three since 2014. The popularity of streaming services like Netflix, Hulu, and Spotify have also changed the way consumers view ownership of their digital media, accelerating openness to content and entertainment subscriptions. Game developers across all genres and platforms have an opportunity to tap into this trend, and must watch it closely to avoid missing out on possible momentum.

The Apple Arcade subscription model does appear to bolster support for premium games (vs. the ubiquitous in-app purchase/free-to-play games), which will benefit developers and players. Still, it leaves developers with the same nagging question: whether they want to play nice with Apple and continue to buy in to the closed system approach, or, if not, whether they have options for competing on other channels. Open system arcades and small, targeted game storefronts, designed for and by developers and players — not tech giants — are the most promising solutions. Specialized destinations, whether subscription based or not, that cater to specific gamer preferences and tastes will make it much easier for developers to reach audiences that will enjoy their games. This approach can also offer a better community experience for players, a critical factor in retaining users and creating a destination with long-term life expectancy.

The broader games industry deserves its bite of the apple. It’s a good time for developers to revisit whether they should work with Apple, and if so, how they can place pressure on Apple to do a better job of supporting developers. More, whether a new game is launching on the app stores or not, developers need to explore how it and their other titles may fit into a subscription landscape. Prioritizing the creation of alternate models that promote better discoverability and financial potential for small games will sustain ongoing game innovation, creativity and variety, and give developers the freedom they need to refocus on their passion for making great games. If as an industry we explore emerging options beyond Apple and the closed system structure, we are simultaneously creating more opportunity and demonstrating to the app stores that there is a better way.

A 20-year veteran of the casual gaming industry, Derrick Morton is the CEO of FlowPlay, the industry’s most powerful immersive gaming platform with flagship games like VegasWorld that has acquired millions of users since its launch in 2006.