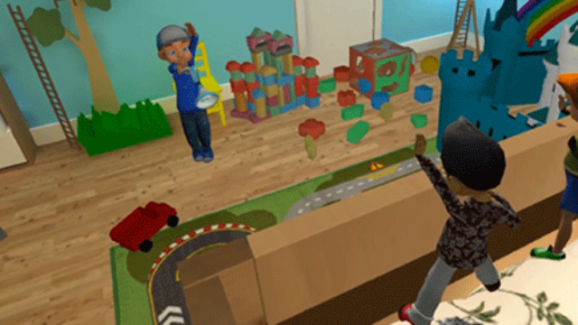 The moment I dropped into Hide & Freeze, I asked myself why I hadn’t thought of it first.

No beating around the bush; this is just hide and seek in VR. It’s the latest project from ImproVive, a fascinatingly experimental VR developer that has little interest in following wave-shooting and beat-slicing trends. Anamika, for example, is a VR dancing game where multiple players control different pairs of hands. A Stickman Reality, meanwhile, was an eye-opening animated short.

Granted, its work isn’t as polished as top-selling VR games but its mission to unearth genuinely different experiences is admirable all the same.

Hide & Freeze might not sound as urgently innovative, but its successful translation a real-life game with a fun few VR twists is striking. In one level, for example, hiders are miniaturized and forced to take shelter among toys on a bedroom floor.

The seeker, appearing as a giant, has to scour every nook and cranny of the room before time runs out. Things quickly give way to a flustered series of shouts and screams as your prized hiding space is discovered. Get caught and you can be frozen. Another player will have to tag you to free you, suddenly turning the dynamics into a squeamish game of cat and mouse.

There’s plenty of great ideas here. In the bedroom level the seeker can pick up toys in hopes of finding hiders taking shelter beneath. Seekers can scale a bookcase and pose next to identical figurines in hopes of fooling the enemy. You can even hide inside objects like walls either in hopes of avoiding discovery or planning an ambush.

In another map set in a house, you have to make your way back to the starting point before being found by the seeker. Movement is teleport-based and a little janky as a result. Still, it wasn’t long before both sides were strategizing and laughing together in a series of desperate escapes and surprise reveals.

It is inescapably rough around the edges, though. The game doesn’t give any sort of visual indicator of when a player is hiding inside an object, so it often looks like they’re just clipping with textures. It also doesn’t help that the environments look like they’re lifted straight from the Unity asset store. The game could definitely do with a tune-up on the presentation side to make it an overall more attractive and professional-looking package.

Hide & Freeze will be releasing later down the line. Three maps are in the works for now. ImproVive says it’s considering both an arcade release and a launch on home headsets.