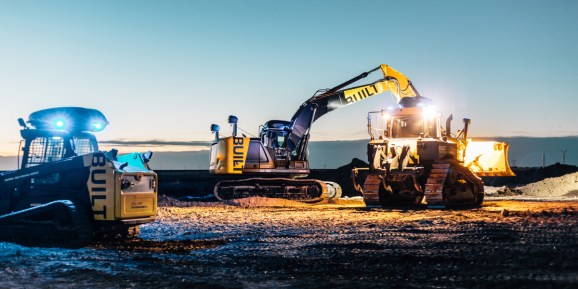 Built Robotics excavator and dozer on a construction site

Autonomous construction equipment company Built Robotics today closed a $33 million funding round to expand its operations to more use cases.

The Built Robotics autonomous system is able to operate on bulldozers, excavators, and skid steers and is currently being used in a number of clean energy projects in remote areas devoid of human construction workers in Colorado, Kansas, Missouri, and other parts of the Midwestern United States.

Built Robotics vehicles are fully autonomous and require no humans in the loop, CEO Noah Ready-Campbell told VentureBeat in a phone interview.

The funding will be used to expand Built Robotics’ AI systems into more use cases, like infrastructure, highways, and road projects, as well as energy sector projects like wind turbines and solar farms. The funding will also be used to hire engineers and fit more heavy machinery with automated systems. Built Robotics wants to make it possible for construction projects to add automation to vehicles or equipment in construction zones with a simple kit.

Due to regulations and other factors, Ready-Campbell is convinced construction will be automated long before autonomous vehicles are on public roads.

“I think the thing that’s most exciting to me about autonomous construction equipment is that it’s here and actually deployed on real job sites today with real revenue coming in, real customers, and real projects that are being constructed using our robots, and that’s different from the self-driving car space,” he said.  “Because we’re in a somewhat more constrained environment, we’re actually able to move faster, and I think you’re going to see widespread autonomy within the construction industry before you will in the transportation industry, as a result.”

Like those solutions, Built Robotics says its AI can help keep construction projects on track and avoid delay costs by being able to operate overnight and well beyond a typical eight-hour shift while collecting data on project progress.

Ready-Campbell says the company’s AI is different from other solutions because it must manipulate its environment, understand terrain and obstacles with lidar data, and do things like predict the amount of force necessary to dig soil.

Built Robotics projects work separately from people today, but in the future the company wants its AI to operate in more complex environments that contain piping or underground utilities, as well as people.

The $33 million funding round was led by Next47, a $1.2 billion venture fund backed by Siemens, with participation from NEA, Founders Fund, Lemnos, and Presidio Ventures. The company has raised $48 million to date.

Built Robotics is based in San Francisco and has 40 employees.