Playfull has raised $2 million to build out a platform that rewards gamers for playing League of Legends and other popular esports games.

Based in Los Angeles, the company tracks player performance across several popular esports games and delivers personalized rewards for meaningful achievements and wins. It’s another step toward what I call the Leisure Economy, where we can all get paid for playing games.

Playfull (not to be confused with Paul Bettner’s Playful) is synthesizing gameplay performance, demographic data, and redemption behavior to train a proprietary machine-learning rewards engine that can deliver the perfect reward to players at the perfect moment, said Patrick Lu, CEO of Playfull, in an interview with GamesBeat.

Lu is a neuroscience expert, and he applies some of that experience to gamers and how to reward them.

“We’re all gamers. And the reason why we started Playfull is because we as gamers have always felt guilty for playing games,” he said. “Especially coming from an Asian household, you are told you need to be a doctor or lawyer or something. Our mission is to build a world where play has a purpose. Coming from neuroscience, we know that play is so good for you. You learn faster, you learn strategy, resource management, and you make friends.”

He added, “And so we want to reward players and help them with their real lives. And instead of just now virtual games that don’t really help them, we can use machine learning to give them rewards in the real world that they can really use.”

Lu believes there will be enormous potential for creating a marketplace that powers personalized interactions between gamers and brands.

Playfull started working with restaurant brands to reach the elusive gamer audience to validate the concept, and with early success they are now expanding beyond restaurants. Its player growth has also been increasing at a rapid clip. 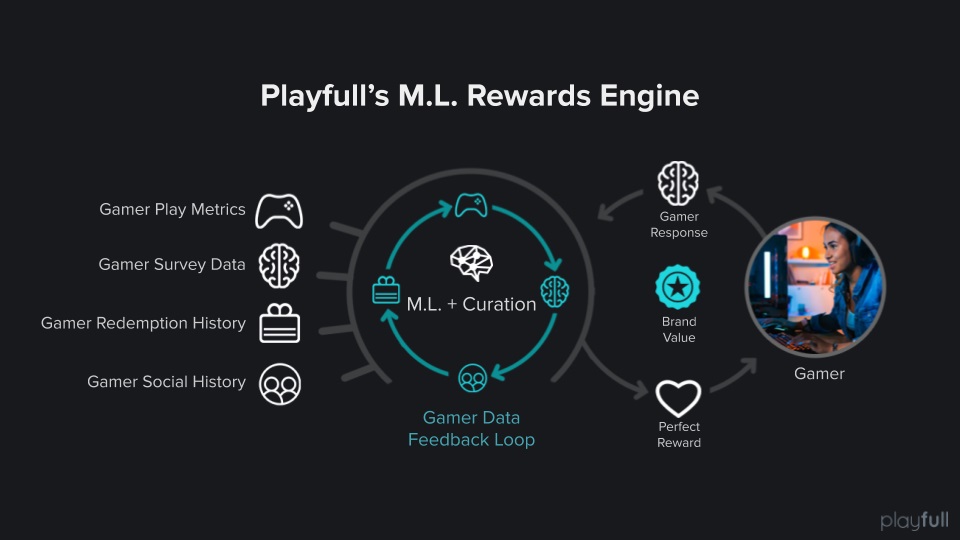 Above: Playfull is using machine learning to come up with good rewards for gamers.

Playfull has now raised a total of $3 million with the new round led by global esports investor MTG as well as Draft Kings investor Boston Seed.

“Playfull creates an authentic, scalable, and profitable connection between non-endemic brands and gamers. Platforms like these will be key revenue catalysts for the esports ecosystem,” said Arnd Benninghoff, executive vice president of esports and games at MTG, in a statement.

Playfull has veteran leaders from Riot Games and Disney and is also guided by an advisory board including Chris Carvalho, former chief operating officer of Kabam; Keith Lucas former CTO of Roblox; Mike Vorhaus of Vorhaus Advisors; and Andy Wing, former CEO of Nielsen Entertainment.

“Playfull’s rewards platform unlocks the elusive global esports population for brands who have traditionally struggled to find an efficient entry point to introduce their products and services,” said Wing said in a statement. 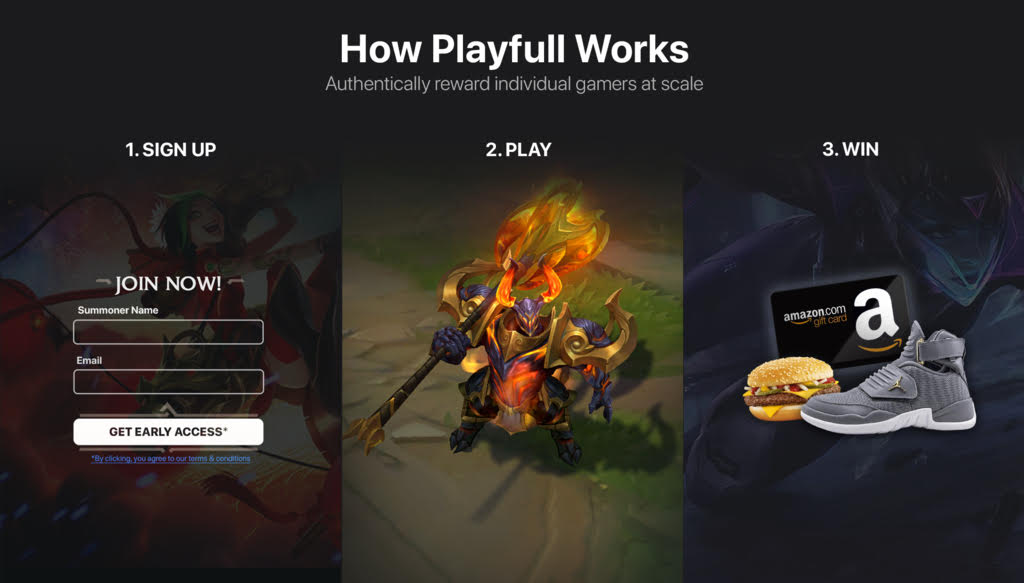 Above: How Playfull works

The startup is partnering with top consumer brands and said it will use the money to grow its sales and product teams while further strengthening its proprietary machine learning rewards engine. Playfull went through the Techstars LA incubator program in 2017.

Lu said the company can use machine learning to get smarter about the rewards it offers.

“We can see what rewards gamers redeem and then as well as who they play with,” he said. “We curate all that data and then on behalf of the brand, present the gamer with the perfect reward. Then, again, we measure the response and further improve.”

Of course, this may make us think about negative scenarios where gamers get addicted to these kinds of rewards, just like gamblers do.

“This is the purpose of why we started this company. You know that games are great, but they don’t help your real life unless you’re a pro esports player,” Lu said. “99.9% of gamers aren’t good enough. And so what we want to do is help gamers improve their lives through doing something they love.”

For instance, you may get a large McDonald’s french fries reward if you achieve something in League of Legends. (OK, maybe that’s not going to improve my life). And Lu said that all of these brands are happy to offer rewards because they really want to reach the gamer demographic.

I asked Lu if he wanted to use cryptocurrencies to offer rewards, as some other startups have done. But he said that cryptocurrency hasn’t caught on with the mainstream yet, so the company isn’t yet going that route. The team has 12 people.