Play games, unlock your inner superpowers, and win at life. That’s the idea behind Skillprint, a startup that uses advanced analytics to study how you play games and uses that information to discern your personality and what kind of jobs might be right for you.

Skillprint plans to use entertaining mobile games to help people discover their strengths in the real world. The more people play, the more insights they learn, and the more opportunities they unlock. Over time, as people build a profile in the Skillprint app (in closed beta), it will become more predictive and suggest ways to unlock their “inner superpowers” to help them get ahead in life.

This work is the brainchild of Chethan Ramachandran and Davin Miyoshi, cofounders of Oakland, California-based Skillprint. Ramachandran was the founder of Playnomics and the winner of our best game startup contest in 2010. He sold that company to Unity Technologies in 2014 and helped it develop its analytics business.

Unity Analytics is now processing 1.5 billion events in games per month. Ramachandran met with Miyoshi, one of the creators of the social casino game business that ultimately built GSN Network into a big game company, and they started their company.

“We’re not building a games company, per se, but we are going to use games for a greater purpose,” Ramachandran said in an interview with GamesBeat. “And that purpose is essentially helping people figure out their strengths, and understand what they’re meant to do in the real world. And a lot of this came out of both of our respective backgrounds.”

We spoke for more than an hour, and I found it fascinating.

You are what you play 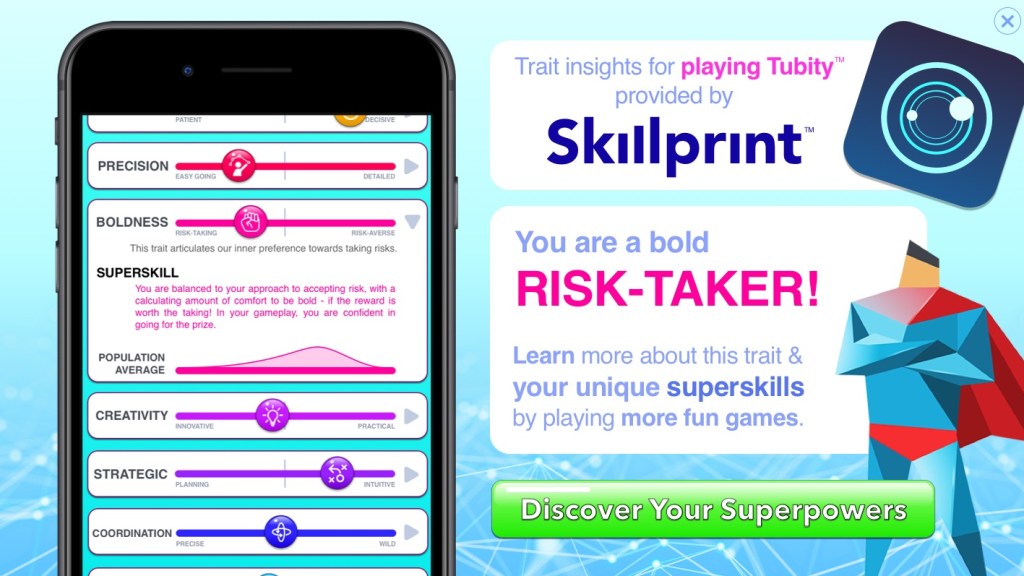 Above: Skillprint can discern your personality by the way you play games.

They believe that the future of work and learning is upon us, and it will require continuous upskilling. A Pew Research Center survey, found that 54% of adults in the labor force say that it will be essential for them to get training and develop new skills throughout their work life in order to keep up with changes in the workplace. Skillprint wants to be everyone’s personal coach in this future, driving the right suggestion for learning and/or work to the right person at the right time.

At the core of Skillprint’s technology is a massive predictive pattern matching engine. This, coupled with neuroscience research around how game mechanics translate into cognitive and personality traits, gives the company the ability to read anyone’s play patterns and make inferences about who that person is in the real world: how bold they are, how analytical, how strategic or creative, for example.

The company is looking to partner with third-party hyper-casual and casual mobile game makers to join its audience network. As people play, they will start to see unique behavioral traits about how they think and act derived from their gameplay. For game makers, Skillprint represents a unique way to increase engagement, grow traffic, find high-quality users, and ultimately monetize. Game makers will be able to join the Skillprint cross-promotion network by integrating a simple software development kit (SDK) which will route users between the games and the Skillprint app.

The Skillprint team brings a significant amount of domain expertise to this opportunity. The rest of the team includes some of the world’s leading experts in large scale data processing, personality assessment, and game design and production.

Getting back in the game

Above: Skillprint wants to unlock your inner superpowers by analyzing how you play.

“At Playnomics, we saw a ton of data,” he said. “Obviously, the game publishers were interested in using that data for monetization predictions, stuff like that. But along the way, you know, I saw people’s personality come alive in games, data around their aptitude and their skills. And so I kind of became obsessed with that even when I was running Playnomics.”

“After I left Unity, I spent a couple of years investing in advising around this theme about whether you really could understand how the mind works by using digital technology, and I went to all the neuroscience labs you can imagine,” Ramachandran said. “And what became clear after a while is all of them were using games. And they were all using games to predict different things about people’s mindsets. The cognitive skills, how they plan, how they execute, how they make decisions, whether you’re bold, whether you’re a risk-taker, the personality, you know, are you extroverted or introverted? Are you open to new experiences? Are you agreeable or not? And where you are in the spectrum? And then things like their skills and aptitude?”

Ramachandran felt compelled to get back into the startup world.

“I had to kind of come back in. And so I think what Davin and I were really interested in, and we’ve been talking about this for years, you know, in this world where the future of work that looks to be really liquid and kind of fluid, between learning, and picking up some skills and getting a gig and switching jobs and trying to figure out what career to have,” he said. “No one is really building an agent for people that sits in their pocket to get to understand their core strengths, and tells them, this is what you’re really good at.”

Ramachandran wants to be able to definitively say who you should be working with and in what kind of job.

At Mesmo, Miyoshi launched an early role-playing game on Facebook targeted at women. His team was acquired by GSN and moved into social casino games. By the time he left in 2013, GSN had 75 million users around the world. He started an online lending company for small businesses in Colombia. 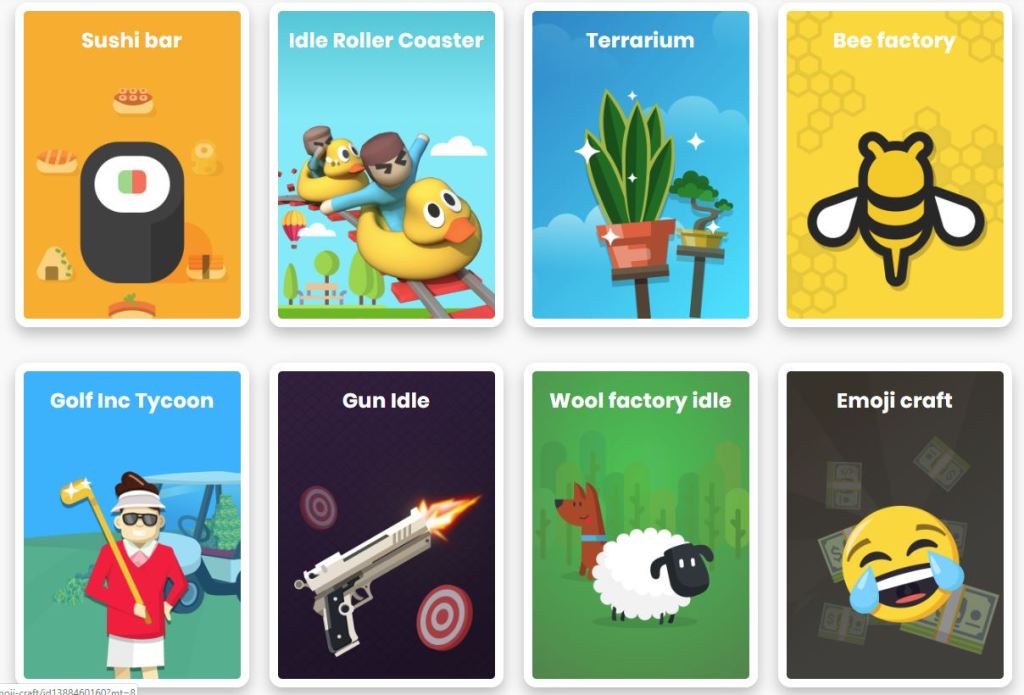 Above: Green Panda Games’ stable is all about hyper-casual mobile titles.

For now, the company is focusing on interpreting how people play simple mobile games, such as hyper-casual games. But over time, it wants to add more sophisticated games into the mix as well.

“I really think play is core to human nature,” Ramachandran said. “There is 25 years of neuroscience on hyper-casual games and the mechanics they use to indicate things about people in the real world. For instance, there’s a lot of research around a match-3 game, about how good someone is at scanning in the real world and visually finding things. The research is just super clear.”

You can find out if someone is a risk-taker or timid.

“What they found is that the correlation between how someone plays a match-3 game, and someone who’s really strong in scanning the real world is super high,” he said. “You can actually predict how good someone is at things. I don’t know how you feel about the public perception of games these days. It feels like this dirty, awful bad for society. I think it’s exactly the opposite. I think they’re really useful. And they can really tell you something about people. And if we can help them become real and useful in the real world, that’s going to be pretty awesome.”

What games say about you 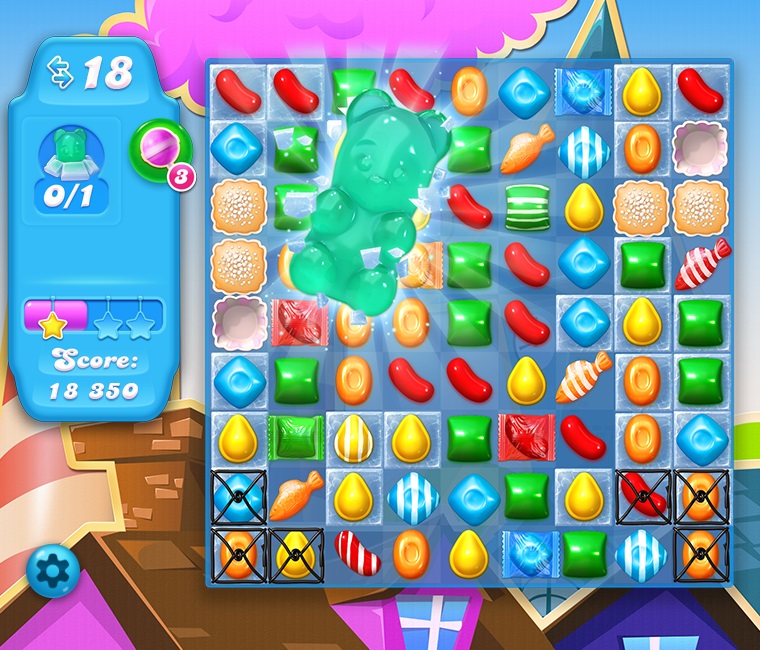 Right now, the company is looking at commercial games to see what they can teach the company about gamers.

Even silly games can be instructive.

“We had the silliest billiards game you could ever imagine. And we saw clusters of people are highly social, highly competitive, people who are collectors and explorers,” Ramachandran said. “And then we put little incentives in front of those groups. And against the control group, the personality group had a 30 times response to the personality incentive. And the reason was, is you were just talking to people at their core level, how they approach things. And so I think that’s a little bit more about how we’re going to do it. Take very simple games, where most anybody can play simply the control schemes, and then look at the differences in how people make decisions and choices, either by measuring against science or by pattern matching.”

The company has five employees, and they’re bootstrapping right now. It’s moving into its private beta test soon. Over time, the data will get better, and come from a variety of game sources. Skillprint can build up an ontology, like a tree of related things, that ultimately tell you something about people.

“Our ontology is game mechanics, game types, play data, behavioral traits, and ultimately, skills and real world opportunities,” he said. “And as we start to build that, they’ll get more and more predictive, because we’ll start to see edge cases will say, oh, Davin is actually really, really bold in these situations.” 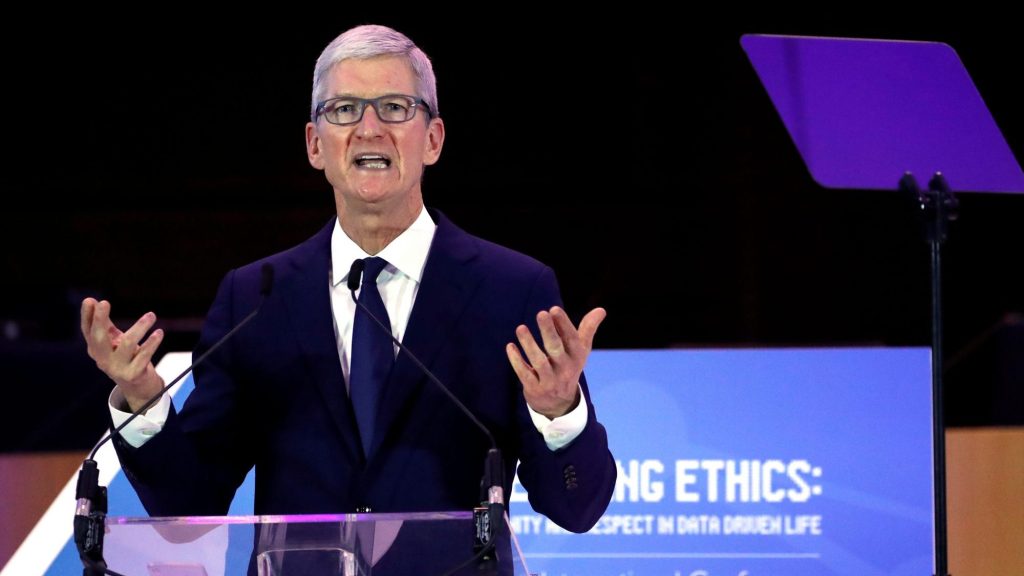 “We’re very cognizant of privacy. I think that’s something that we can get ahead of. The way to think about this data is that it is not identifiable in so it is not personally identifiable. It’s actually really privacy compliant. And you’re also giving the data in the hands of the consumer, and letting them have controls as to how that data is being used. And whether they want to connect to opportunities, and what amount of data they want to keep in show and opportunities will have to be very compliant with GDPR [European privacy law],” Ramachandran said.

The value of games

Some people recognize the value of games. McAfee found in a report that gamers will be good cybersecurity researchers.At the same time, roughly two-thirds of Americans are unhappy or disengaged in their jobs.

“Twenty-five percent of all 25-year-olds want to switch their careers no matter what,” he said. “And so it’s just like staggering, you know, and 36% of the U.S. population is working in the gig economy. You’re looking at a world where there is no safety net. Everybody’s kind of their own free agent, everybody’s building their own portfolio skills. How do you take all that and be someone’s ally, so that they can naturally use what’s happening in the world, but use it to their advantage? And that’s the ultimate vision of where we want to go.”

“I don’t know if you’ve read any of Jane McGonigal‘s research, but she makes a point that, if you tell people, you’re playing something for a purpose, then all of a sudden, their perspective on what they’re playing changes dramatically. And it becomes actually really, really meaningful to them,” he said. “If you tell them that what they’re playing is a waste of time, it becomes a waste of time, right? So it’s almost like you have to define it ahead of time and say, there is value here. And then the whole your whole mindset shifts and how you view what you’re doing on both sides, the parent and the child.”

He added, “And we’d be more than happy to beat the drum of saying, you know, these games you think are kind of throw away, time wasters are actually pretty valuable, and can be really revealing.”