Valve is continuing to build on its Steam Labs experiments with rapid iteration and prototyping. Today, the company is launching a number of new tools to improve discovery on its store. It is also updating one of its more popular experiments to integrate it right into the Steam store app.

I’ve already reported about the first four Steam Labs tools. Now, Valve is adding two new methods for finding games you may like. Experiment 005: Deep Dive uses tags and other identifying features to help you find games that relate to one another. Experiment 006: Community Recommendations, meanwhile, seeks to highlight games based on player reviews.

While other stores have their own ways of doing discoverability, Steam is the only one regularly introducing new algorithmic features. Although, I do love Xbox Game Pass’s random game selector.

With Deep Dive, players start with a familiar game, and then Steam builds a web of recommendations. As you you click through on games in this web, you get a new set of related games. The idea is to keep clicking through until you find something completely new that you wouldn’t have seen otherwise.

“Deep Dive leverages tags provided by each game’s creators and the Steam Community of users to identify games similar to the ones you know and love,” reads a Steam blog. “In the interest of helping users explore a breadth of games, Deep Dive displays very similar, somewhat similar, and little-known but well-loved similar games among each set of recommendations it displays.”

With this experiment, Valve wants players to help each other discover what is popular right now. That is already happening with the top-seller list on the front page of the Steam store, but Community Recommendations uses reviews instead of sales.

If a game is getting a ton of positive reviews, it’ll show up here even if it’s not selling millions of copies.

“The Community Recommendations experiment provides a great overview of what’s hot on Steam, listing today’s recommendations sorted by their helpfulness to readers,” reads the Steam blog. “Advanced controls enable users to expand the view to include this week’s, or this month’s reviews, or to limit the set to reviews written after a particular duration of playtime.”

Interactive Recommender gets called up

Valve is now integrating the Interactive Recommender tool into the Steam store. It is even going to show up with select recommendations on the store’s front page.

And when you click on that recommendation tool, it’ll take you to a native version of the Interactive Recommender running inside of the Steam app. This enables you to get a list of games based on what you play on Steam. You can then narrow that list to show more niche and newer games. 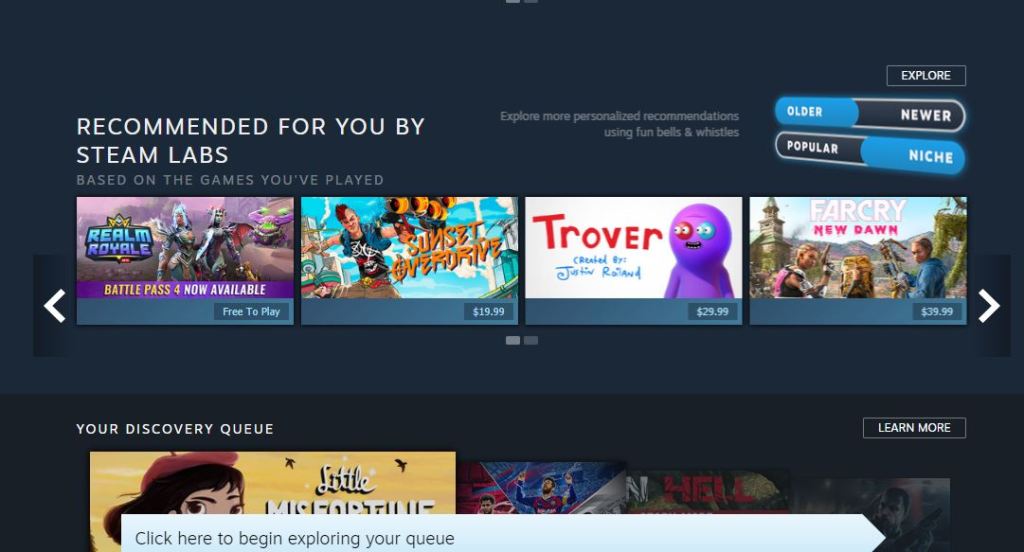 This Steam Labs imitative only opened to the public in July. Since then, Valve has already updated many of them and now at least one is already making a difference in how the core app functions. At this pace, Steam could look very different in a few more months. And that is potentially a very good thing for people trying to find games and developers trying to get discovered.