Replaying The Legend of Zelda: Link’s Awakening for the Nintendo Switch was at times bittersweet. The original 1993 Game Boy release is my favorite game of all time. And I was desperate for this one to recapture the magic of playing Link’s Awakening in the backseat of my parents’ car during a family road trip back in the mid-’90s.

But here’s the unfortunate thing: The Link’s Awakening Remake didn’t make me feel like an 11-year-old boy again. In fact, it made me realize that I’m never going to feel that way ever again in my life. I even cried a little. I’m pretty sure this is my midlife crisis.

I’m not going to hold my inner turmoil against the new Link’s Awakening, though. But it has me thinking a lot about the point of a remaster. Who are these remakes for? Other than Nintendo’s shareholders, that is.

I think that Link’s Awakening’s answers that question for me, and it more than justifies its existence.

Link’s Awakening is not massive, but I would call it dense. It takes about 10-to-15 hours to get through the adventure. But Nintendo packed each one of those hours with fun characters and memorable moments.

The story starts with lightning striking an anime-looking Link in the middle of the ocean. When you wake up, you are much cuter, squatter Link in a cartoon world. And something isn’t right about this Koholint Island. Link runs into goombas and chain chomps from the Super Mario Bros. games. And one of the first characters you meet is a mushroom-loving guy who looks like Mario and turns into a raccoon.

That weirdness runs throughout Link’s Awakening. And it is part of what makes the game so memorable.

You’ll trade dog food for bananas with a starving crocodile. Then you’ll interrupt a different croc named Schule Donavitch, who is painting a hippopotamus model. You’ll even help a goat named Christine catfish Mr. Write, who looks exactly like Dr. Wright from the Super Nintendo SimCity game (Dr. Wright’s music even plays in the background).

But Link’s Awakening isn’t just weird. It punctuates its oddities with touching and poignant moments. In a rare cutscene, Marin tells Link about her longing for something beyond the shores of Koholint. And then you can perform her stunning melody with her using your ocarina. Later, you have to help a restless ghost find peace.

It’s all so damn charming that when the time comes to resolve Koholint’s mystery, you may find yourself wishing you didn’t.

I am one of the bad ones. I was skeptical of the visuals in the Link’s Awakening remaster. To be clear, I was always OK that it’s cute. My issue was just that the I wanted something that was more faithful to the Game Boy original. Again, we’re talking about a game that I consider a formative experience in my life and one of the biggest reasons that I am writing about games for a living.

But in the end, all those doubts faded away. Link’s Awakening is beautiful. 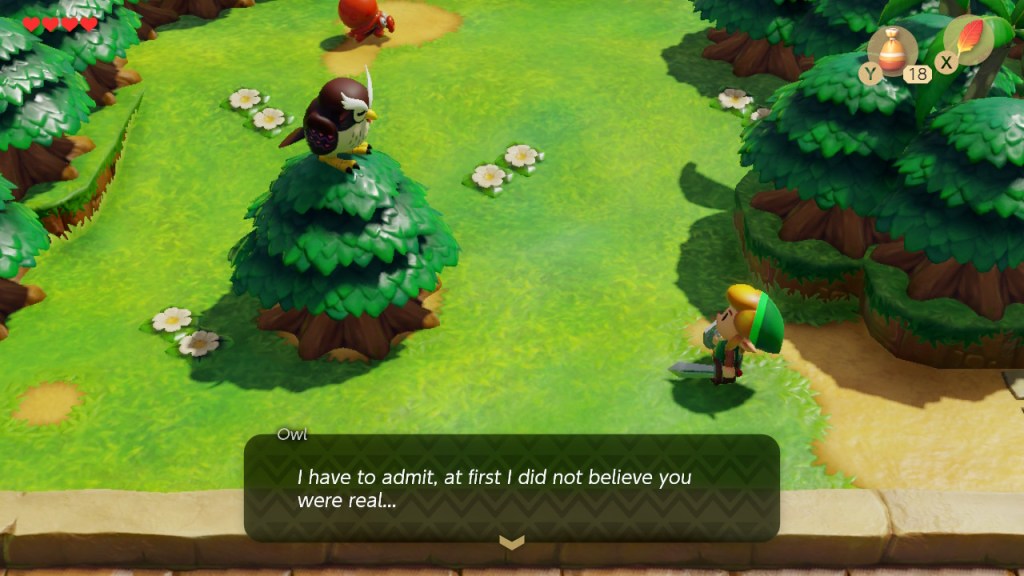 Above: That’s a helpful owl.

Nintendo is using a tilt-shift effect to make the game look like a living toy or diorama. That effect fits with the themes of the game, and it never loses its impact.

And after seeing every character, dungeon, and boss, I think the overall look ended up fulfilling my desire for something faithful. Characters like Tarin, Chef Bear, and the Walrus all look exactly as I imagined they should. Same for bosses like King Moblin, Dodongo Snakes, and the Genie.

The biggest reason to update Link’s Awakening has always been its interface. As much as I love the original, the Game Boy’s two face buttons are serious technical limitation. A few hours into the game, you would often need to switch between various weapons and tools, and it’s a hassle.

Link’s Awakening on Switch solves that in couple of ways. You always have a sword equipped and tied to the B button. Nintendo has also tied lift to A, shield is right shoulder, and your dash skill is always left shoulder. In the original game, you had to equip each of those items as needed to either A or B. This would create circumstances where you couldn’t even had your shield equipped.

Sure, you’ll still have to get into your inventory occasionally, but the experience is so much better that I will have a difficult time going back to the original game without it. 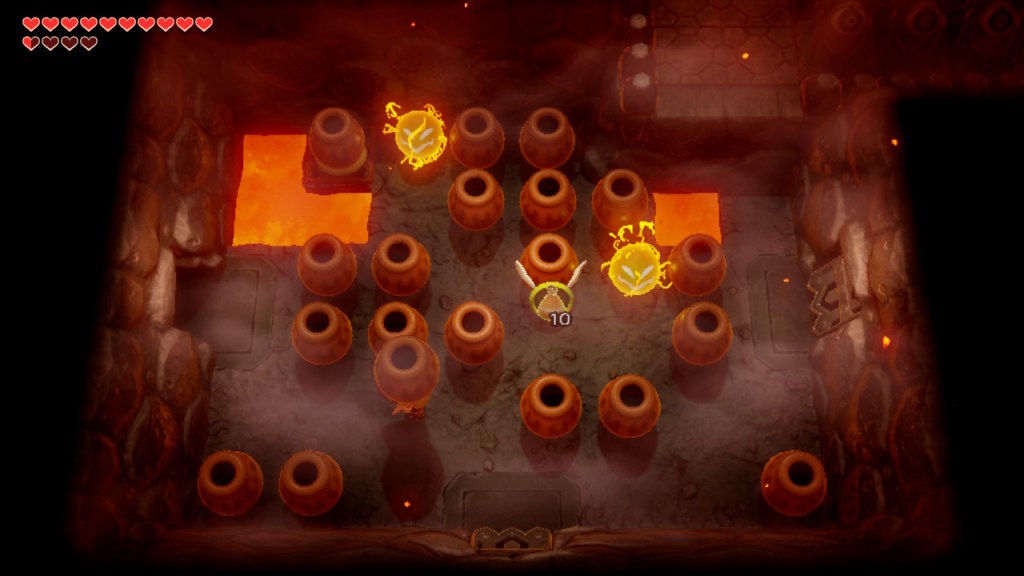 Above: You no longer have to equip the bracelet just to lift a pot.

Link’s Awakening runs at 60 frames per second about 90 percent of the time. But it occasionally and briefly drops to around 30 frames per second. This seems to occur when you enter a new area or one begins loading in the background. When the stuttering stops, it jumps right back to that smooth 60.

Now, this hasn’t bothered me. I don’t even think the slowdown looks bad. It meshes well with the visual style and makes it look more like a stop-motion animation. The trouble is in the transitions from an fps of 60 down to 30. That’s sometimes jarring.

But it was in no way detrimental to the way the game played. The issue always seems to clear up before the action gets started. So, by the time you are ready to fight some moblins, Link’s Awakening should run at 60 frames per second.

The basic Zelda-maker reveals the flaw in that idea

One of the big new features in this version of Link’s Awakening is a dungeon maker. This enables you to mix-and-match tiles to build your own Zelda adventure for others to play.

I came away from my time in this mode surprised that it works. But it also revealed to me why a true Super Mario Maker-style Zelda Maker is unlikely.

Zelda’s dungeons follow so many rules that Nintendo has automated a lot of the way this mode works. You basically just place the rooms together in a logical configuration. Nintendo’s A.I. then decides which chests get keys and which rooms get locked doors. And the nightmare key is always in the last chest that a player unlocks.

That automation is impressive, but it also sucks some of the magic out of doing a Zelda yourself.

I’m sad that this new Link’s Awakening didn’t make me feel like a kid again, but nothing ever will. And I’m OK with that. I’m creating new memories all the time. Link Between Worlds and Breath of the Wild both brought magic into my life because they have grown along with me.

Where does that leave Link’s Awakening? It’s still in my heart. And I still love it even if I cannot re-create specific childhood feelings.

So how do I fairly judge this game when I bring so much baggage to it?

Well, I figured it out. When I go to give Link’s Awakening to someone else, would I recommend this version? Is this the game I want my kids to play? And yes. It is. Absolutely. Because the truth is that it does recapture its old magic. It’s just not the time machine that I thought it could be.

The Legend of Zelda: Link’s Awakening is out September 20 for $60 for Nintendo Switch. Nintendo provided a download code for the purpose of this review.