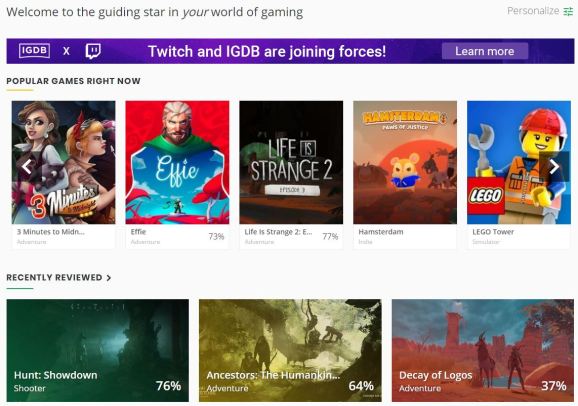 Twitch is planning to help spruce up IGDB's data and technology.

Twitch now owns and operates the Internet Games Database. Amazon’s livestreaming company acquired the IGDB to improve how people can search for games on its site. The IGDB and its public API will both continue to work independently of Twitch. But the influx of new resources will enable the Amazon-owned company to improve the database.

This investment makes a lot of sense for Twitch. The service already positions itself as one of the best place to discover new games. But that strategy can face challenges if new, old, or obscure games are not easily searchable on Twitch. If Twitch can spend the money to ensure that IGDB is regularly updated and thoroughly maintained, it is more likely that it will have accurate data for the millions of people who view livestreams each month.

“We want to make it easier for people to find what they’re looking for,” a Twitch spokesperson said in a statement. “IGDB has developed a comprehensive gaming database, and we’re excited to bring them on to help us more quickly improve and scale search and discovery on Twitch.”

Twitch did not disclose how much it paid in this deal.

IGDB provides a repository to quickly get information. Using its API, you can call on IGDB to get a game’s release date, publisher, or other information without having to enter it manually on your own platform. That’s useful for Twitch and other sites, which can use IGDB to add games without having to rely a community that may create 15 different spellings for the same game.

Twitch and IGDB promise to keep the site open

IGDB is not exclusive to Twitch despite the acquisition. This move is all about giving the IGDB a stable home so that it can serve a specific function for Twitch.

“By joining Twitch, we will be able to tap into their experience, resources, and skills, which will enable us to accelerate our progress and deliver the version of IGDB we all always dreamed about,” reads an IGDB blog post. “Not only that, our companies share the same culture, core values, and passion for gaming — making this the perfect fit.”

But the database and its API will remain open so that it can serve that purpose for whoever needs it.

“The API is here to stay, and we are merging our premium and free tiers into a single new free tier,” reads the blog. “Going forward, that means that you will now contribute information to Twitch as well as IGDB and the thousands of apps, services, and websites that are powered by this information.”

If this works, it won’t just improve the accuracy of data on Twitch. It should help sites across the web.