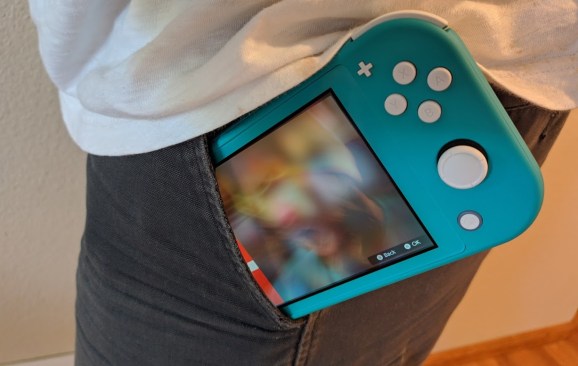 My Nintendo Switch Lite just showed up. Naturally, I abandoned all of my responsibilities to tinker with it. I want to see how playing a game with two accounts at the same time works. And I want to see how the improved battery treats me. But the biggest curiosity I have right now is all about putting this cute little machine in my pocket.

I put my original Nintendo Switch in my pocket.

You want proof? Here is a video I made of me doing exactly that:

And you better believe I’m going to do the same with the Switch Lite. I just hope it can withstand that kind of treatment.

That is a Switch in my pocket, but I’m still happy to see you

But I guess putting the Switch in your pocket is weird. My friend John Phipps watched in horror as I pulled my Switch out of my pocket at a hotel bar during PAX West last year.

Here’s how John reacted as I removed the Switch from my pocket:

Above: In John’s home, he loves and respects his Switch.

But here’s the thing, John. I’m going to keep putting the Switch in my pocket, and I’m going to do the same with the Switch Lite. But I don’t feel great about the latter.

If you are hard on your electronics like I am, you might already know the problem. It’s those darn analog sticks.

With my big boy Switch, the analog sticks are definitely a common point of failure. I use them all the time, of course. They get a ton of thumb traffic. But they also rub against my leg inside my pocket when I’m driving in my car. Or the sticks get caught on jean material as I’m pulling the device out to play it in the line at Chipotle or whatever.

It’s a problem. And it’s exactly why John is making that face over there.

With the original Switch, I’ve come to accept that I’m just going to ruin some Joycon controllers. And it’s easy to come to terms with that because replacing those little gamepads is easy. Nintendo specifically designed them to slide off and on. That makes it simple to go out and buy brand new, fully functional gamepads whenever I need to.

Sure, Joycons are expensive, but I try to wait for a deal or buy used. Again, I’ve accepted that this is just the cost of doing things the way I do it.

My habits could prove fatal for the Switch Lite

The Switch Lite, however, doesn’t have removable Joycon. So does this device just have an expiration date on it? Is it done when my pockets and stupid thumbs finish having their way with the analog sticks?

I’m just gonna hope that the same god beefed up the Switch Lite to put up with a lot more punishment. I guess we’ll find out.