Video games are going through a transition period. But this shift isn’t necessarily about the jump from one console generation to another. Instead, companies like Microsoft and Apple are changing the way people spend money on games with their subscription services. Despite these changes — or maybe because of them — the industry is still growing.

Industry-tracking firm The NPD Group is estimating that the video game industry will generate a total of $44.6 billion in the United States this year. That is up 6% over 2018’s $42.2 billion. But this steady growth looks somewhat disappointing relative to the explosive year-over-year gains of 2017 and 2018.

“The last three years have been a period of remarkable performance for the U.S. video game market,” NPD analyst Mat Piscatella wrote in a blog post. “While 2019 is not forecast to reach the double-digit percentage gains we’ve seen in recent years, continued strength in mobile, growth in digital spending on consoles, and a thriving Nintendo Switch platform are projected to be the primary factors that will lead to $44.6 billion in annual consumer spend for the total video games industry in the U.S. [That’s] an increase of 6 percent.”

The content is propelling gaming to continued growth. People are happy to spend money on new games. They are also putting cash toward subscription services and virtual goods.

“Sales of video game content, which includes full game sales, downloadable content and microtransactions, as well as subscriptions across mobile, console, portable and PC, is forecast to grow by 9 percent when compared to a year ago, to $37.8 billion,” writes Piscatella. “Mobile and console digital growth is expected to offset declines across other content segments such as physical and PC digital.”

Hardware, as you might expect, is trending downward. The PlayStation 4 and Xbox One are aging fast. Most people who wanted one of those devices have already purchased one. Now, many of the hardcore fans that power consoles sales are looking to the next-gen systems likely coming in 2020.

“Sales of console and portable hardware are forecast to reach $4.4 billion, a decline of 12 percent when compared to 2018,” writes Piscatella. “Growth in sales of Nintendo Switch hardware is expected to be offset by declines across PlayStation 4 and Xbox One hardware.”

Nintendo’s momentum is going to continue

Nintendo has already had one of its best years ever thanks to the demand for its software and Switch console. And NPD is predicting that will continue through the end of the year.

“My current forecast has Nintendo Switch hardware reaching an annual unit sales total not seen in the U.S. market since the Xbox 360 in 2011,” explains Piscatella.

Nintendo released the revised Switch Lite today along with The Legend of Zelda: Link’s Awakening. It is also planning to launch Pokémon Sword and Pokémon Shield on November 15. Those games should also boost Nintendo’s sales.

Which games will top the sales chart for 2019?

Finally, NPD has a prediction for which games will finish 2019 as the top 10 best-selling releases of the year. These include digital sales with some specific exceptions, but it is also missing data from many publishers and indie developers. It is also only for full-game releases and no microtransactions. 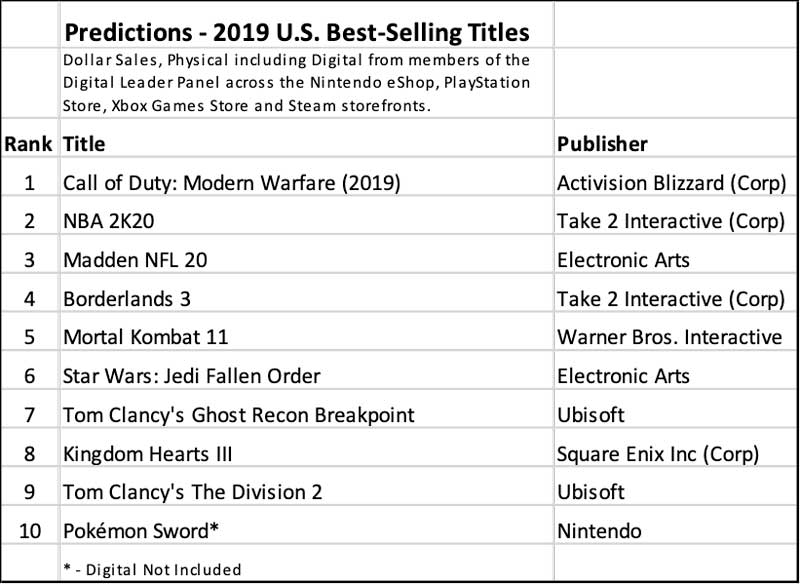 We’ll check back in January to see how this list compares with the actual results.