Android folk have their version of Apple Arcade and Xbox Game Pass: It’s Google Play Pass, and it will offer access to more than 350 apps and games for $5 a month. It’ll debut this week in the U.S., Google says, and it’ll roll out to other nations “soon.”

Google shared the details today. Gaming has been moving toward subscription models, be it the season passes you get in individual games like PUBG or the all-you-can-eat plans like Xbox Games Pass Ultimate. And, of course, Apple Arcade, which launched last week. Apple’s sub is getting more than 100 games, though it debuted with 14 at launch. These services are a key development in the mobile game market that research firm Newzoo estimates will hit $68.5 billion by the end of 2019. Free-to-play games larded with in-app transactions dominate mobile, and paid games — especially those from indie devs and studios — have had difficulty carving out a viable niche. Apple Arcade and Google Play Pass gives such games a way to stand out and make money in this brutal market.

This enables some developers to earn revenue without mechanics like lootboxes, which are seeing more scrutiny as regulators attempt to determine if they’re gambling or a “surprise mechanic,” as an EA exec said this summer. If any of these games have in-app transactions, such as expansions, the dev can include them as part of the subscription for no additional cost. These apps and games also won’t have ads, another negative aspect of the free-to-play model.

Developers and studios will make money based on downloads and engagement with an app or game. If someone plays, say, Terraria on a near-daily basis for a year, that engagement matters for the money that the studio would bring in.

When it launches today, Play Pass will have more than 350 games and apps (this pool skews two-thirds games and one-third apps). This helps it stand out from Apple Arcade — you might find a paid podcast app you love is part of it, and it could even help lure people from the iOS to Android ecosystem if the paid apps are attractive enough (or force Apple to respond by including non-gaming apps in Arcade).

Google’s adding apps and games each month, too, such as The War of Mine and Cytus.

Play Pass works with Android devices, including Nvidia Shield. You can’t subscribe on a Shield — you’d need an Android smartphone or tablet to do so — but you can download games that are part of the subscription — they show up with zero cost in the Play store.

Put it on your ‘tab’ 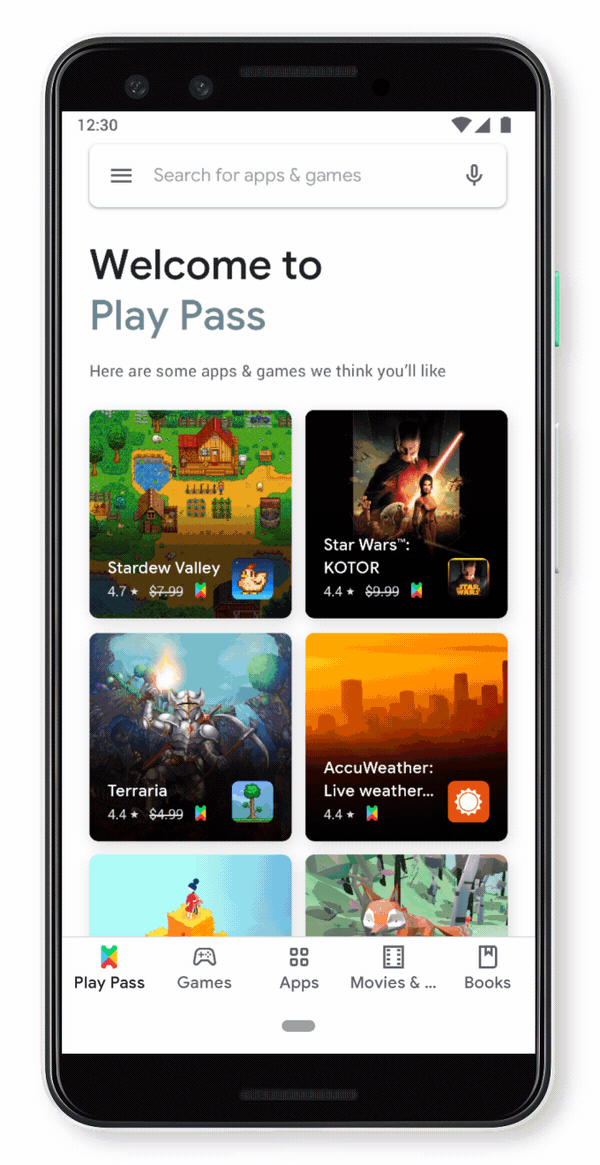 The Play Store will come with a new “Play Pass” tab for subscribers. This is an additional way to help devs and studios with discovery — even in a field with over 350 selections, it shouldn’t be that hard to find a specific game. A Play Pass “ticket” also denotes those that are part of the subscription in the store.

Group product manager Austin Shoemaker said that Google will be using an algorithm to float up recommendations for apps and games based on how people engage with them.

A subscriber can share their with five other people in their Family Library. Each person in this group can access the Play Pass, downloading what they what without affecting what you’re playing.

What’s cool about this is, say, if you and five others make up your Family Library all want to play Stardew Valley, you can … even together in the same room and on the same network (though Shoemaker laughed when I asked if they had tested this exact case).