Manticore Games has raised $30 million to launch a platform so a new generation of game creators can build, share, and play online games. The San Mateo, California-based company will use the money for accelerating development of Core, a digital playground and community designed to unleash imagination and explore new play experiences.

“Core is a digital playground service that we have been working on a year and a half now,” said Manticore CEO and cofounder Frederic Descamps in an interview with GamesBeat. “We are not ready to show it yet, but we are talking about the genesis of it. We saw a gap in game making. It is still reserved to a limited set of folks. You need technical proficiency, funding, a team. The pipeline you use is made of lots of pieces and it is pretty rigid. It limits the creativity in games. We are talking about a new way for creating games. A new way for creators to get into it.”

Jordan Maynard, the chief creative officer and cofounder of Manticore Games, said in an interview with GamesBeat that Core will be a kind of one-stop shop for game developers, including features like end-to-end native multiplayer.

“Developers often don’t have time to think about creating multiplayer code,” Maynard said. “We don’t think there is anything else out there with the combination of creation and publishing.”

Competitors to this kind of idea could include game engines such as Epic Games’ Unreal and Unity Technologies’ Unity 3D. But the company sees itself as complementary. Descamps said the idea is to remove obstacles so developers can publish and share quickly and then interact with their communities. The more I think about it, the more it seems like Buildbox, Roblox, and Minecraft are more like the real competitors.

“We think we can create much faster cycles of iteration and feedback loops” between developers and players, Descamps said.

Descamps and Maynard have had storied careers at gaming giants and startups. They worked at companies like EA, Zynga, Xfire, Trion Worlds, and A Bit Lucky. The latter was a social gaming startup that Maynard and Descamps started to make Facebook games in 2009. By 2012, Zynga acquired A Bit Lucky. I’ve followed Descamps’ career since 2002, when he was a grad student at Stanford University and he quizzed me about a book I wrote on the making of the Xbox. 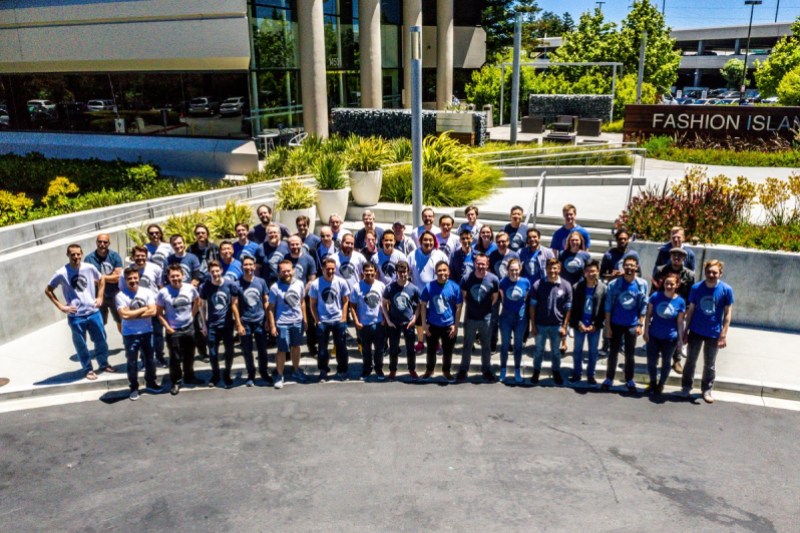 Above: The Manticore Games team.

They started Manticore to help define the next era in games. Manticore’s vision is to open a door to innovation and emergent game design by bringing creators and players of all skill levels together in a collaborative social ecosystem that supports a wide variety of shared online experiences.

“Frederic and Jordan founded Manticore on a revolutionary idea,” said returning investor and Benchmark general partner Mitch Lasky in a statement. “They saw the opportunity to radically simplify the way high-quality 3D games are created and published, and in the process, to open up gaming to the explosion of innovative user-generated content that has transformed other media. Core unlocks a new world of possibilities for both game designers and game players, and it is truly one of the most exciting things we’ve seen in gaming in many years.”

That’s a pretty good endorsement from an investor who put money into companies such as Riot Games, Snapchat, Thatgamecompany, and NaturalMotion.

Like with YouTube’s creation of a whole generation of YouTubers and influencers, Descamps said he hopes Core will create a whole new set of game creators. Today’s hackers and modders don’t have enough opportunity, he said.

“Core is actually very different from anything that exists today,” Descamps said. “If you look at the choices you have as an existing game maker today. These are very technical choices. Like Jordan, you have to have 20-plus years of experience in gaming. We think that is very limiting. There is a new generation of creators out there that is undiscovered.”

Maynard added, “There are a lot of people who don’t even think they can make games. And one of the things we want to do with this tool is to enable those people to be able to make and publish their own games. When you think about League of Legends, my supposition is there are probably 10 others that never made it to fruition because the barriers to entry were too high.”

Manticore has close to 60 people and it is hiring across a variety of disciplines. In an email, Lasky said, “The platform they’ve built is really remarkable. It’s incredibly empowering for non-professional designers and allows creators to leverage each other’s contributions, so it has some interesting potential for network effects and bricolage. It’s one of the few things I’ve seen in games that has the potential to enable new content types, sort of in the way that YouTube’s accessibility created genres like unboxings or reactions as popular categories.”