The Last of Us Part II is finally coming to us on February 21, 2020. And I couldn’t be more excited to play this sequel to the 2013 title, which was my favorite game of all time.

So you can imagine I was a bit jazzed to attend a preview event on Tuesday in Los Angeles, where Naughty Dog and Sony announced the game’s launch date, revealed a new trailer, and let us play two levels of the game — Jackson and Seattle — for a couple of hours. It looked remarkably good for a game that was running on the PlayStation 4 Pro, a system that will be replaced next year with the PS5.

After I played, my nerves were a bit frayed from the intensity. Still, I sat down with Newman to talk about the game without sounding too breathless. We touched on the thinking behind the sequel to my favorite game of all time. We talked about what Naughty Dog wanted to say with its sequel, how new gameplay elements like dogs that hunt you change the game, and the high stakes as you worry about whether someone you love is going to get killed in the game. 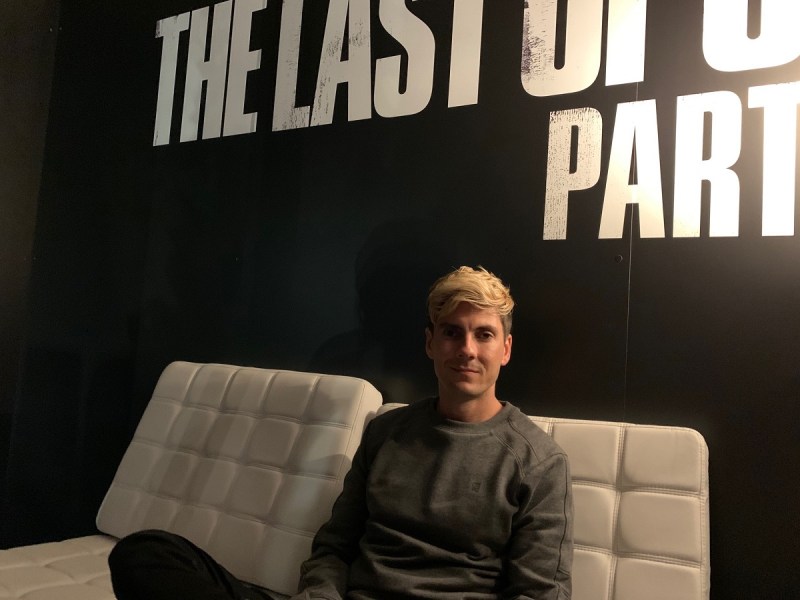 Above: Anthony Newman, co-director of The Last of Us Part II.

GamesBeat: What’s your role been on the project? Did you work on the last game?

Anthony Newman: I was a lead designer on Uncharted 4. Right after Uncharted 4 I started working on The Last of Us Part II, and midway through I was promoted to co-game director.

GamesBeat: It’s an interesting set of revelations today. What was the thinking behind what you decided to show?

Newman: This is actually kind of unusual for us as far as how we’ve paced things out. This is by far Naughty Dog’s most ambitious game. It’s the longest game we’ve ever made, and the deepest and most complicated. It’s not just in terms of overall length. The systems are way more intricate and complex.

We thought it was much better for people to experience that for themselves, rather than having us just talk about it or show a short trailer. We wanted to show a solid chunk of gameplay, seeing multiple contexts in the game. You see the snowy location, the overgrown suburbs of Seattle. You get multiple environments and multiple enemy types, both humans and infected, as well as our new dog enemies and some of our new infected classes. We thought all of that put together would make clear what kind of game this is. 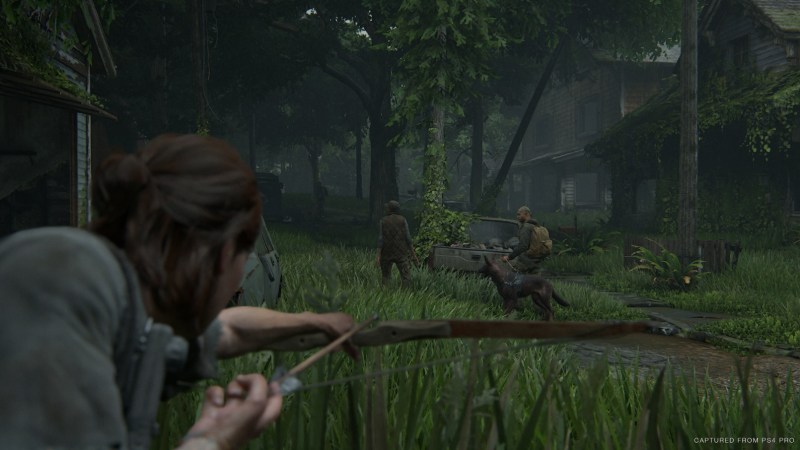 GamesBeat: The dogs change the gameplay a lot. You go into the same kind of space, but now you have to really pay attention to how much you want to expose yourself.

Newman: Absolutely. Stealth has always been a core part of combat in Last of Us. We’re really excited about what dogs bring to the table, both mechanically and narratively. From a mechanical perspective, not only are they really fast, but they have this devastating melee attack, where they can pounce on you. They’re hard to track, moving quickly and low to the ground. By being able to sniff you and pick up your trail — you can’t play purely defensively by staying unseen, because eventually there’s a good chance that a dog will pick up your trail and you have to interact with them. It’s a great way of keeping players on their toes.

From a narrative perspective, it speaks to the themes we have in the game around how far you’re willing to go to exact vengeance on the people who’ve wronged you. It puts players in uncomfortable positions, having to fight against what are usually friendly animals. In the context of this world, they’re really deadly creatures that you have to deal with. That kind of reluctant, uncomfortable violence is a big part of The Last of Us.

Newman: I get excited about the combat challenge they create. One thing that’s cool is we have this system now where, whenever you’re knocked to the ground and you’re lying on your back — it’s called supine. Prone is lying on your stomach, supine is lying on your back. If you aim from that state, you can aim while lying down, or you can dodge roll out of it. It’s a fully featured state that you can be forced into if you’re shot, or when a dog pounces on you.

I’ve seen people here today get into situations where a dog pounces on them, they struggle with the dog, and then kick it off. Then they’re approached by another human enemy and they have this very cinematic moment of fighting from the ground. There’s a lot of cool, intense moments that come about. 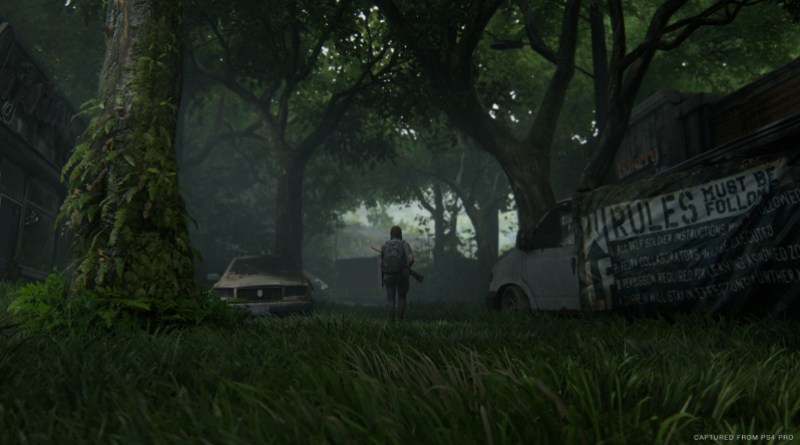 Above: 30 years after the fungal outbreak, there are still rules to follow in The Last of Us Part II.

GamesBeat: The dogs also feel like they restore a lot of tension. Sometimes you’re trying to hide or stay defensive, but there’s still that feeling of being hunted.

Newman: Like I was saying before, it prevents you from doing what’s usually the simplest strategy in stealth games, which is just remaining unseen. In stealth games you need to worry about enemy vision or hearing, but now there’s this whole new sense of smell you have to be concerned about.

What’s great is that we’ve matched that new challenge with a bunch of new abilities for Ellie. She can now craft arrows, the first time you’ve been able to craft ammo for your weapons. There’s a cool crossover between the crafting system and the gunplay system. You can craft silencers for your gun, so you have a limited ability to make your shots suppressed. Now, even for stealth players, despite the dogs negating certain strategies, we’ve opened up new opportunities for gameplay.

GamesBeat: I kind of blew it in one area, the room where the runners are all gathered, about six of them. I went in there once, got killed, and then I tried to go in a second time and wasted all my ammo. If I’d just used one of those trap mines, they would have run right into it. I made it out at the very end of the level with nothing left but a bottle.

GamesBeat: I had to do a lot of melee fighting. But you can create some interesting sets of circumstances to push people in different directions. I was just barely surviving, but if I’d had all that ammo there would have been a different feeling to the level.

Newman: That’s one thing that’s been a fun challenge to try and tackle in this game. We want to allow for a broad range of play styles and honor all of those play styles. One thing that’s interesting is if you play completely stealthy, and you just stealth kill everyone and use no ammo, you can get into an encounter and be overloaded. You just dump all your ammo on one encounter and potentially trivialize it. Or you have the reverse situation like you had, where you use up all the ammo early and then you don’t have it when it might be useful. It’s been a fun challenge to try to honor as many play styles as possible, as many circumstances the players can find themselves in. 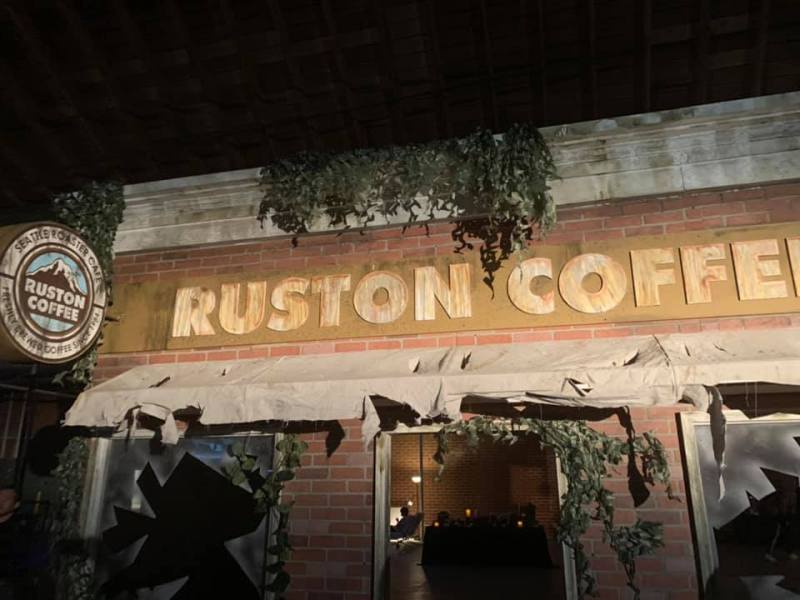 Above: Sony created a real-life rendering of the Ruston Coffee shop from The Last of Us Part II.

GamesBeat: As far as context, how much are you giving people? I didn’t really know that it was just one day later, after the kiss from the last scene, until somebody mentioned it. That was a rare moment, where we got a little bit of information about how much time has passed. Is there much else you’re giving as far as that kind of context, or do you find that people function fine without all of that? Even in the trailer, you didn’t reveal too much larger world context.

Newman: This is my first game in this role, and so I’ve been a lot more involved in the marketing than I have been before. One thing that I find really interesting is that when it comes down to it, the marketing phase of the game is as much a part of the story that we’re trying to tell with the main game as the main game itself. Every piece of information, the schedule that we follow to release that information, exactly what we’re showing, it’s all done very purposefully to give people just enough of a picture of the game to be intrigued, and have a general idea of what’s going on, but still be excited and surprised when they play the actual game. It’s like a prologue. We’re really careful about what we choose to show.

GamesBeat: Different parties, like the Fireflies, are they still part of this in some way? I read some things that mentioned them.

Newman: We’re not talking too much about the Fireflies. Really, the group that we were showing in the demo today is the WLF, the Washington Liberation Front. They’re almost a military-esque organization. They’re a militia, really. They’ve taken over the area of Seattle. Previously, at E3, we showed another group that we haven’t talked about in too much detail, but the Seraphi, a different group that’s also in Seattle. How those groups relate is a mystery that you’ll have to wait for in the game.

GamesBeat: Are there any other big hints in what we saw today about things that are very similar or very different from the previous game?

Newman: For me, the thing that most defines this game is that every single facet, from the technology to the mechanical game design to the narrative — I feel like every facet, we’re trying to take a quantum leap forward with this game. For example, in the first game, there was no dodge. It was a very simple melee system. When we added the dodge mechanic, we wanted to do it in a way that lived up to Naughty Dog animation quality.

In other games, when you dodge in different directions, maybe there are four different directions you can dodge in, four different animations. In The Last of Us Part II, it’s contextual to the direction that the enemy attacks from and the direction you move to. If an attack is coming vertically and you’re going to the left, it’ll play an animation where she leans to the left, just missing the attack that’s coming. If it’s a horizontal attack, she’ll duck to the right. There’s this pool of dodge animations.