Last year, Intel and Overwolf started a $7 million fund to invest in apps and mods for hardcore gamers. And Overwolf said today the Overwolf Developer Fund has now invested $2 million of that money into 25 projects.

The idea was to support the PC gaming community with a fund for developers working on game applications, modifications, or services that enhance the experience of today’s PC games. Overwolf has created an overlay technology that adds features to existing games.

After six rounds of funding, it has invested into everything in small apps and one-man teams through to full companies committing hundreds of thousands of dollars to their products.

“When we launched the joint fund a year ago, our goal was to empower independent developers who have cool ideas to get out there and build their products.” said Uri Marchand, Overwolf CEO, in a statement. “Seeing the teams working on apps is very gratifying for us, and the products so far have been fantastic. It feels great to be there for developers across the globe and support them as they manifest their visions in ways that benefit gamers everywhere.”

Above: The Overwolf Development fund has funded these projects.

The joint Developer Fund still has millions in funding waiting for the right projects and devs, and the fund is considering new applications on a monthly basis.

The 25 apps funded in recent rounds include social challenge apps, in-game scouts, training tools and more. A couple of the projects are described below. 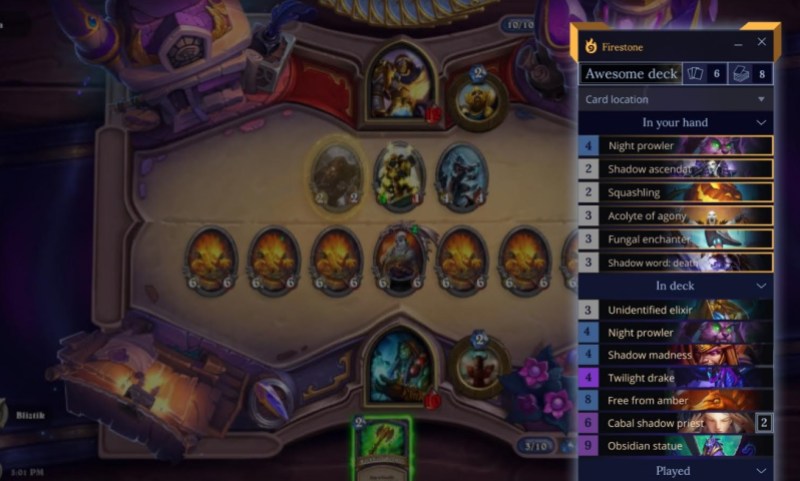 Above: Overwolf funded the Firestone project.

Ikon.gg is one of the projects that got funded. Changing how gamers engage in online contests and win rewards, Ikon (formerly qlub.gg) removes the need for centralized tournament management. For gamers, Ikon is a way to create clubs, enter or initiate live challenges to compete in against others in League of Legends, and win rewards by getting top results. Rewards include in-game skins, Riot points, and more. For influencers and streamers, Ikon is a way to increase revenues beyond what can be made over Twitch and similar platforms by starting a successful club and growing it over time.

Ikon’s challenges are based on in-game events such as kills, assists, and minion kills (CS), which is where Overwolf’s platform comes into play, making these events visible to Ikon and enabling it to generate leaderboards and keep track of real time challenge scores.

Firestone is a companion app for Hearthstone, Blizzard Entertainment’s competitive card game. It provides several useful features for players including card collection management tools, custom achievements for players seeking extra recognition, and a decktracker helping gamers maximize the potential of their decks in-game. By leveraging Overwolf’s in-game events, Firestone can display a real-time list of cards available for the player and keep their collection constantly up to date with new cards whenever new packs are opened.

Firestone showcases Overwolf’s product lifecycle. Firestone’s creator is a passionate Hearthstone player with past development experience, but also has a day job and a family. Now with the fund’s support, he is empowered to build his biggest app yet, an app changing how Hearthstone players play their game.